The gap between UK city economies is growing and skills are a large part of the story. Whilst there are a multitude of factors that impact on a city’s ability to adapt to changes in the global economy, from its industrial history, location and transport links to governance and institutional forms within the city, the skills profile of a city stands out as one of the most important factors. For example, the more graduates there were in a city in 2004, the more likely its population and stock of businesses grew over the subsequent decade.

Worryingly, the skills gap between cities is growing. The gap between the two cities with the highest and lowest proportion of graduates rose from 36.4 percentage points in 2004 to 47.9 percentage points by 2013. There are now nearly four times as many graduates in the top ranking city (Cambridge) compared to the lowest ranking (Mansfield) relative to the size of the cities’ populations. 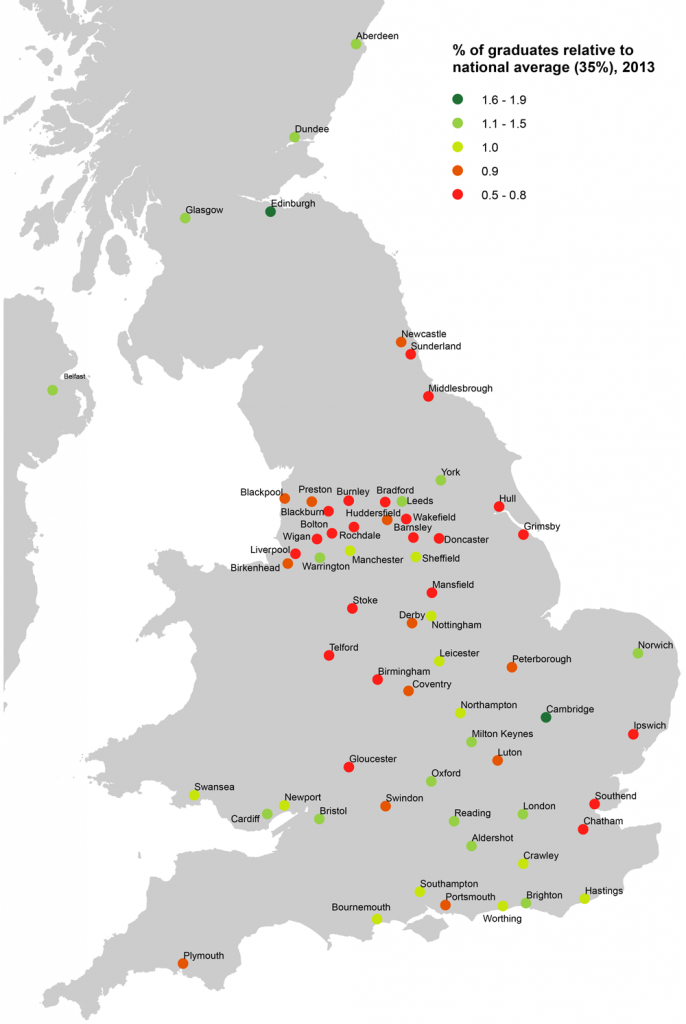 For cities that have struggled to adapt the structural shifts that have taken place in the economy, it is imperative that they focus on equipping their residents and workers with the skills and qualifications they need to succeed in the labour market. This is about improving the performance of schools, developing career pathways, offering opportunities for existing workers to develop their skills and retrain, and connecting with employers at all stages.

Increasingly this doesn’t just matter in terms of how these cities fare alongside other UK cities like London and Cambridge, but how they compare cities across the globe. And here the news is not encouraging. The UK’s younger generations are falling behind their peers in other countries on literacy and numeracy, which links to inequalities within the UK. Research shows there is a greater tendency for individuals in the UK to develop these skills in the workplace, but what happens when fewer employers are investing in training and when basic skills deficits are masked by automation in the workplace? And how are the 52 per cent of young people in Bradford who leave school without an A* to C grade in Maths and English, where youth unemployment is nearly twice the national average, going to get the opportunity to improve their skills?

Cities across the country are introducing new policy interventions in response to local skills needs, in part as a result of the ‘devolution’ deals. This is positive for two reasons. Not only are local partners best placed to understand their challenges and bring partners together to more effectively intervene, it also means there is greater experimentation. Greater experimentation, if coupled with appropriate evaluation, can improve our understanding of how struggling cities in particular can raise skills levels.

One of the big outstanding policy questions is how London managed to so dramatically improve the performance of many of its primary schools during the late 1990s and early 2000s. At this point, there are still more questions than there are answers. When the findings of the Department of Education’s recently commissioned research are published we might get a little closer to understanding what cities elsewhere can learn from London’s experience. Equally important is ensuring we learn from Greater Manchester’s restructuring of FE provision or Sheffield City Region’s Skills Bank.

If the next government is to succeed in rebalancing the UK economy, they need to close the skills gap that exists between cities. Enabling cities and businesses to better respond to local skills needs and supporting the evaluation of these interventions are important elements in this approach.

What does Cities Outlook 2015 tell us about the housing crisis?