The central insight from Centre for Cities’ work on levelling up is that it is the underperformance of big cities which helps explain much of the UK’s lagging productivity, and this underperformance costs the UK economy just shy of £50 billion per year. But what impact does this have on the regions these cities are located in?

The goal of levelling up the economies of places across the country should be to help them achieve their productivity potential, which will vary from place to place. Centre for Cities’ estimates show how far from this potential different places are, costing the UK economy £83 billion per year – 4.2 per cent of output. This is more than the Government spends on defence, on housing, on transport, on foreign affairs or international development. The majority of this comes from just 8 places: the largest cities outside of London (with Bristol the only exception).

Figure 1: The lost potential of different parts of the UK costs the national economy an estimated £83 billion per year

Closing this gap would see a substantive increase in the economic output of different regions outside of the South of England. As the chart below shows, the North West is furthest from its potential, and achieving this would increase output by £22 billion, or 10 per cent per annum (that’s four extra Blackpools). Yorkshire and Humber and the West Midlands follow closely behind.

In absolute terms the North East has the smallest gap. But closing this gap would still see regional output increase by 8.6 per cent, a large expansion.

Figure 2: Large cities account for the majority of underperformance in most regions 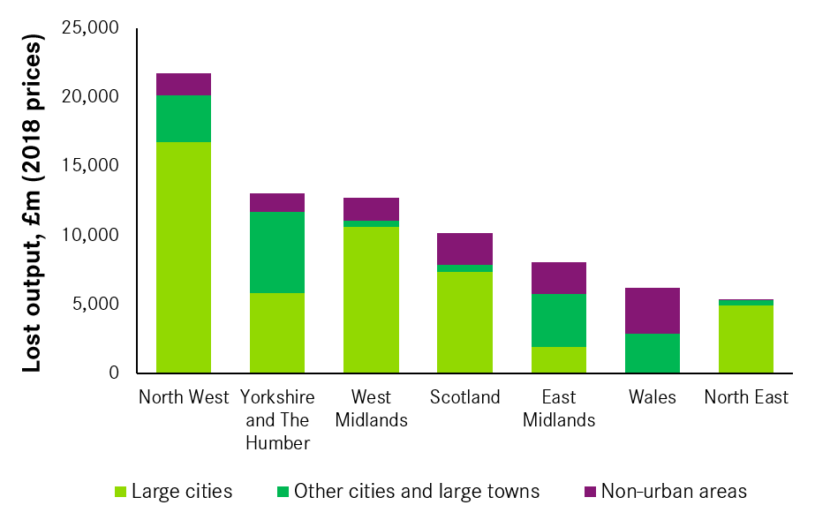 Source: ONS; Centre for Cities’ calculations
Note: There are no cities above 550,000 population in Wales

As is the case when looking at the national picture, the split in the bars shows that, in spite of the significant contributions they already make to the regional economy as is, this underperformance is driven principally by each region’s largest cities. In the North West, Liverpool and Manchester account for 77 per cent of the gap. In the West Midlands Birmingham accounts for 83 percent of lost potential. And in the North East Newcastle’s poor performance is responsible for 92 percent of the wider region’s underperformance.

While the goal of levelling up the economy should be to help every place achieve its productivity potential, these estimates underscore the current drag that large cities have on their wider regions, and the size of the prize if policy helps them fulfil this potential. And it illustrates again how if politicians want to level up the North West, North East or West Midlands, they won’t do it without addressing the underperformance of their biggest cities. Getting these regional cities firing offers a substantial prize to their wider regional economies.

Key work on levelling up

This briefing uses the theory of economic complexity to show how the economies of Britain’s cities and large towns have developed over time and sets out the implications for how the Government should approach its levelling up agenda.

A collection of views from urban leaders across the country in advance of the Levelling Up White Paper.