It was notable that some of the UK’s largest urban authorities, led by those in London, were the few that came out for remain in the EU Referendum. But there were clear differences between cities too, as shown in the six figures below.

1. There is no clear big city vs small city story

While some of the largest urban authorities came out in favour of remain, there was no clear split between large and smaller cities. The table below shows that while large cities in the South and North cast fewer leave votes than their smaller neighbours, the opposite was the case in the Midlands. 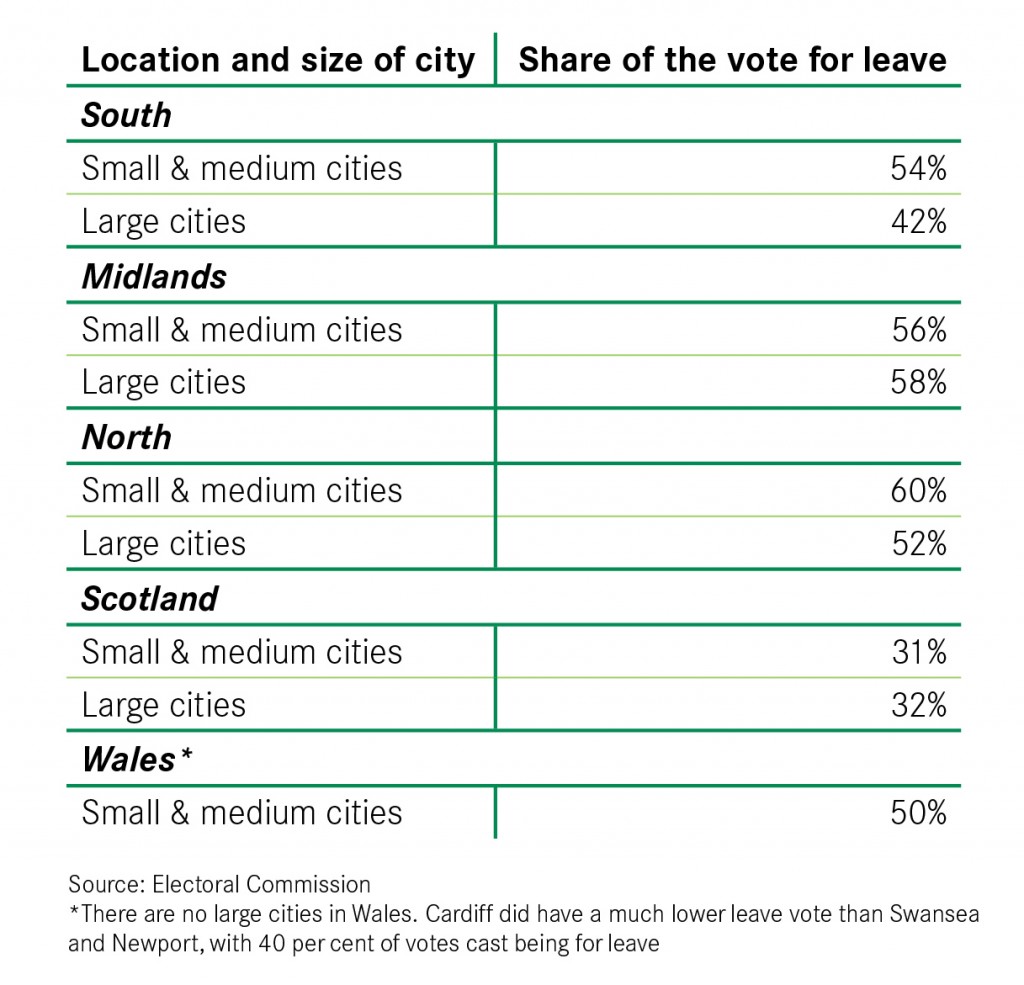 On a city-by-city basis, Mansfield had the highest share of leave votes – 70 per cent of votes cast were for Brexit. At 26 per cent, Edinburgh had the lowest.

2. The story on age is not as clear cut as it has been set out

While much as been made about the age split in the referendum result, the chart below shows that age was not a convincing predictor of which way a city would vote. 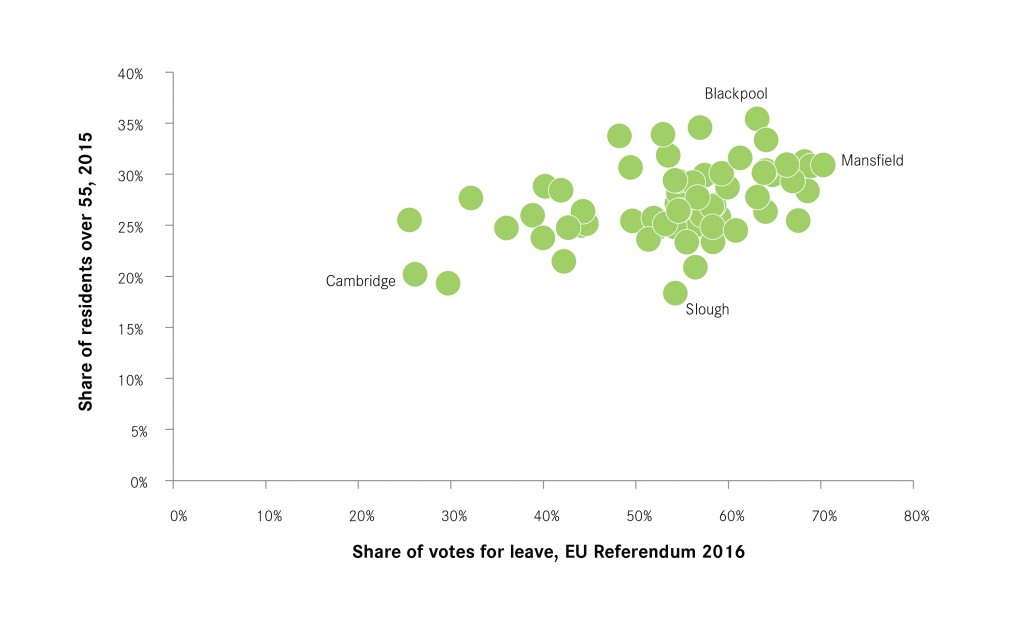 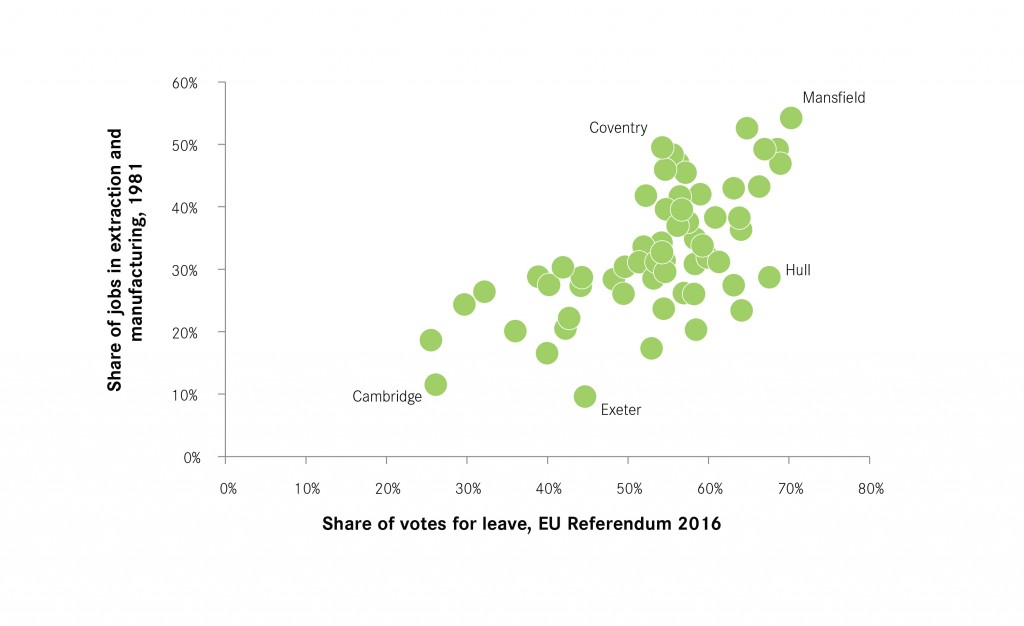 4. Concerns about the ongoing pressures of globalisation also seem to have had an impact

While the past appears to have a bearing, present worries appear to have had an impact too. Those cities that have the highest shares of jobs in skilled manual occupations – arguably the ones most under threat from on-going globalisation – were most likely to vote leave. Once again, Mansfield had the highest share of residents working in this category. 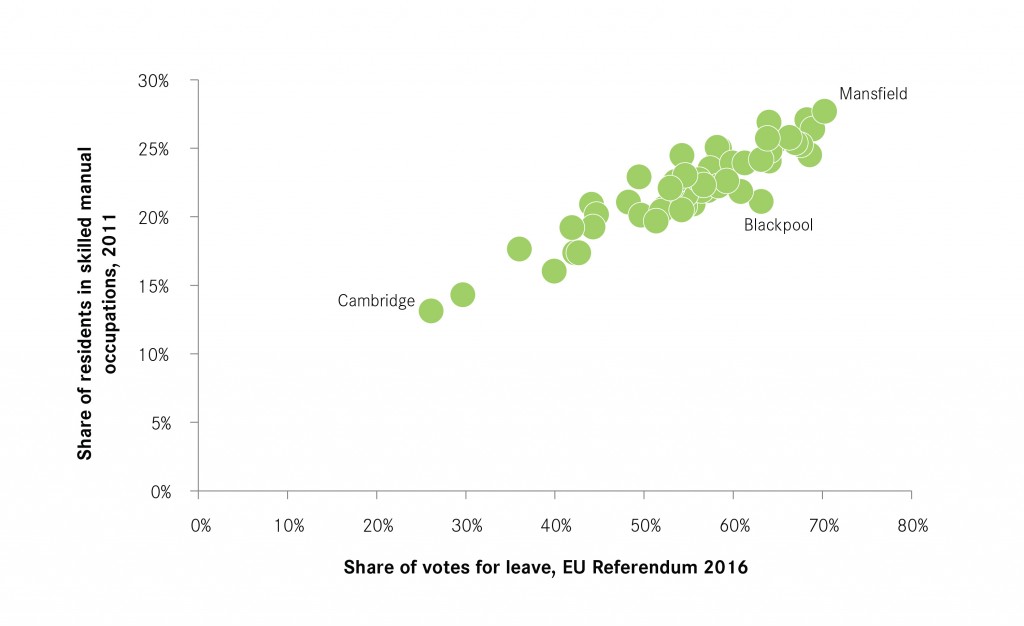 5. There is some relationship between deprivation and leave votes. But this doesn’t hold in London

The inability of places to respond to globalisation will have increased levels of deprivation in them, so it’s no surprise to see a positive correlation between the two (data presented for all local authorities here). The one big exception is the boroughs of London, which don’t fit the pattern. One explanation for this might be that, while individual boroughs suffer from high levels of deprivation, their residents still have access to a very buoyant city economy, increasing the job opportunities available to them relative to other areas. 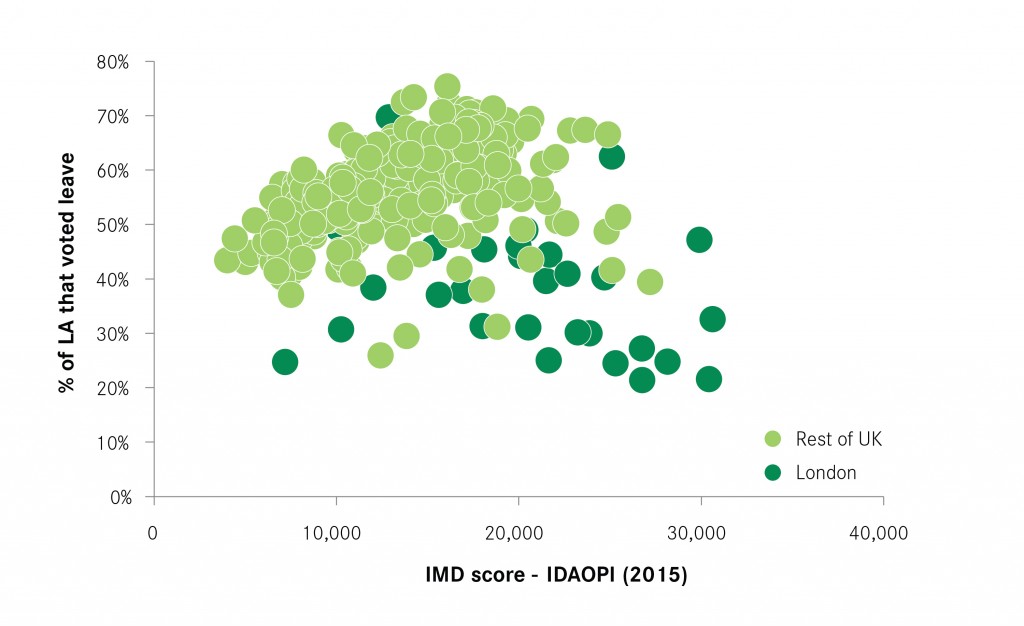 6. Levels of education were a good bell weather of the strength of the leave vote

Those cities with the highest shares of people lacking five good GCSEs or equivalent were more likely to vote leave. This again is likely to reflect the pressures of globalisation – those with few qualifications find it more difficult to compete in the labour market. Meanwhile those cities with higher shares of poorly-qualified residents are most likely not to benefit from globalisation – they are more vulnerable to their jobs being offshored to cheaper locations, while they are less attractive to businesses offering higher-skilled, better-paid jobs (so limiting job opportunities). The opposite is the case for cities with high shares of degree-educated residents.


This is where the age old story seems to become more relevant. Splitting the data by both qualification and age showed that share of residents with poor qualifications was a good predictor of the outcome of the vote across all age groups. But this wasn’t the case for degree holders. The share of young degree holders in the population correlates much more strongly to the remain vote than the share of older degree holders.

Much has been made about the split between younger and older voters. While we must be careful with correlations, data for cities seems to suggest a more nuanced picture. Younger, poorly educated people appear to be as frustrated with globalisation as older people with the same level of qualifications. Meanwhile it is young degree holders that were most keen to remain. I’ll offer some reflections on what this means for policy in my next blog.