Ageing will change society’s needs, and will require more resources to be spent on pensions, healthcare, and social care. And this will have larger implications for some cities than others. Cities Outlook 2018 offers some insight into population changes in UK cities over recent years. But to get a better picture of how ageing will affect different places, it’s necessary to dig deeper into the data and to look at the share of the population in each city aged over 65 (notwithstanding the fact that some people work beyond retirement age). 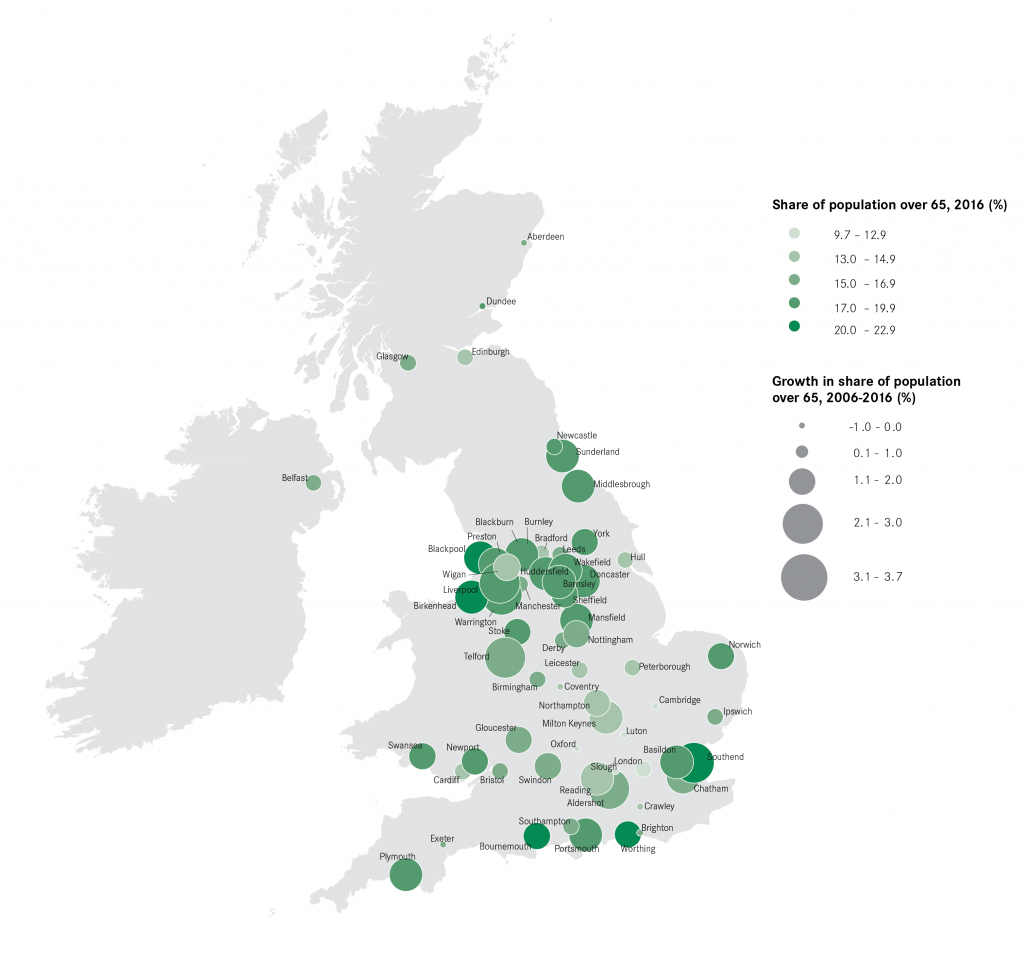 Currently 18 per cent of the UK’s population are aged 65 or over, compared to 15 per cent in UK cities. Some of these cities are especially young: 12 per cent of the population of Luton are over 65, while in Slough it is only 10 per cent. Interestingly the youngest cities tend to be southern inland cities (as shown by the smaller bubbles on the map).

But this isn’t the case everywhere. In total there are 19 cities which are older than the UK average. The oldest of these include Blackpool, Bournemouth, Worthing, Southend, Birkenhead, and Swansea – all smaller coastal cities.

Seven cities, such as Crawley, Brighton, Coventry, and Dundee, have surprisingly seen a decline in the share of people aged 65+ even as the country has aged. This has mainly been driven by large increases in those in younger age groups.

However, in the other 56 cities across the UK the share of people aged 65+ has increased, and in 22 cities this demographic has grown by two or more percentage points. This was led by Wigan (see the table below), where the share increased from 15 percent to 18.8 percent. 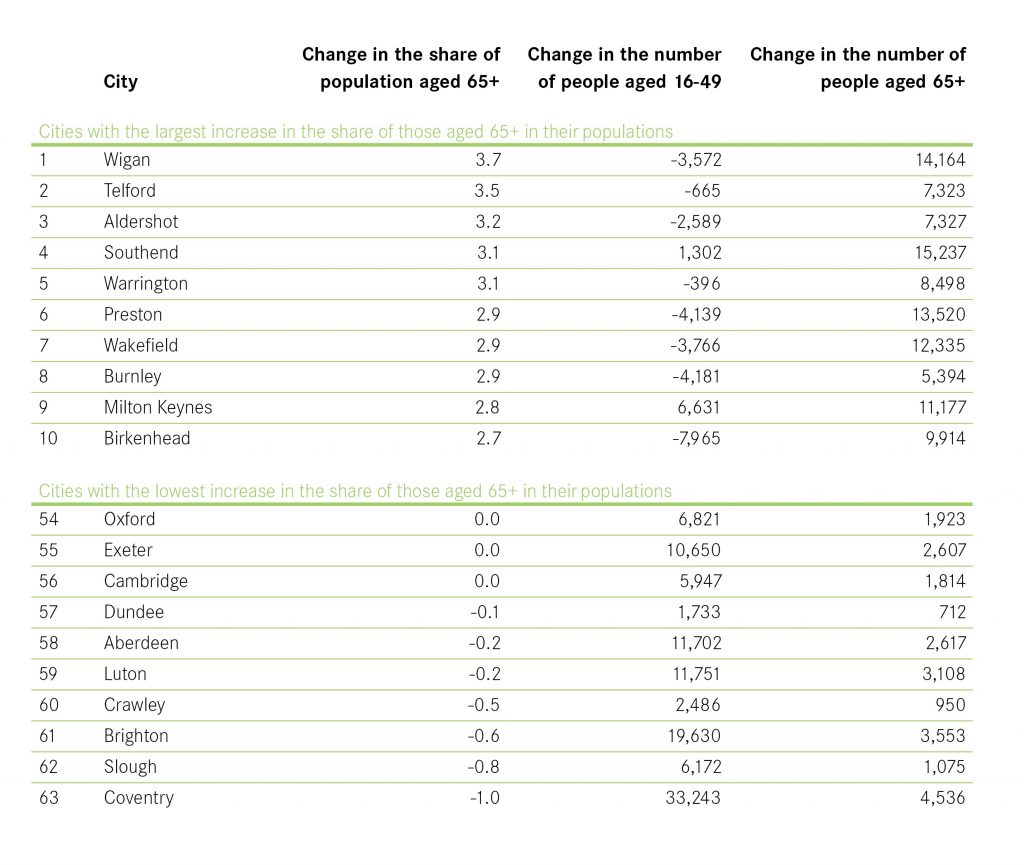 Of the cities that have seen the largest increase, there are two main trends. The first is the presence of a number of new towns in this group, such as Telford, Milton Keynes, Warrington and Basildon. Ageing in these places reflects in part a number of original movers to the new towns turning 65, and means they are now likely to be dealing with greater demand for adult social care than in the past.

The second is that in many places (which includes some new towns), the rise in the share of those aged 65+ was not only the result of an increase in the number of older people, but also because of a fall in the population aged 16-49.  These are the largest, darkest bubbles on the map. This may reflect an underlying weakness in their economies, as younger people move elsewhere for job opportunities.

All cities will face greater funding demands as pressure on social care increases from a combination of an ageing population and budget cuts (as the infamous “Graph of Doom” shows). And the data above shows that this will be particularly acute in certain places.

In the short term the Government has announced stop gap funding of £150 million to spend on social care. But this doesn’t address the longer term growing pressures on services. Allowing local authorities to keep a greater share of their business rates is a potential longer term response, but will be more effective in places with stronger economies (such as Milton Keynes) than those with weaker ones (such as Wigan and Southend). If – as suggested above – weaker economies do experience faster ageing, the current system risks creating and widening inequalities between places in the quality of care.

Ultimately, Government reform of social care is required to balance the funding demands of an ageing population between the taxpayer and wealthier pensioners. The politics of the situation make this difficult, of course. Indeed, the most recent proposal to reform social care lasted only four days, before being dropped by the Prime Minister Theresa May after being branded “the dementia tax”.

There has been little movement on this since, and the Chancellor Philip Hammond did not even mention social care once in the November budget. However, it is an issue which will only grow in urgency in over the coming years. And an answer will be needed if we are to avoid further Northamptonshire-style local authority financial calamities in the future.

See more data on population and other indicators on our data tool.