The first blog of this TfL series showed that a key difference between the public transport funding models in London and Paris is that dependency on fare revenues is particularly low in the latter. Of the five cities analysed, the French capital is the only one where fare revenues accounted for less than 30 per cent of total revenue. So how does Paris fund its public transport system?

Central government subsidies are a small part of the equation

Paris has a funding tool called “Versement Transport” (VT). This gives local government the powers to create a local payroll tax for firms with more than 11 employees. It’s a system that has been in place in Greater Paris since 1973 and today it varies between 1.4 per cent and 2.6 per cent of gross wages, depending on their place of residency.

Figure 1 shows the importance of VT to Paris’s public transport finances. It accounts for 52 per cent of all revenues and around three quarters of funding from taxes (2018). Central government subsidies are a significant component of Paris’ transport – 18 per cent of total revenue – which is higher than what TfL’s previous received from the Government (around 10 per cent). 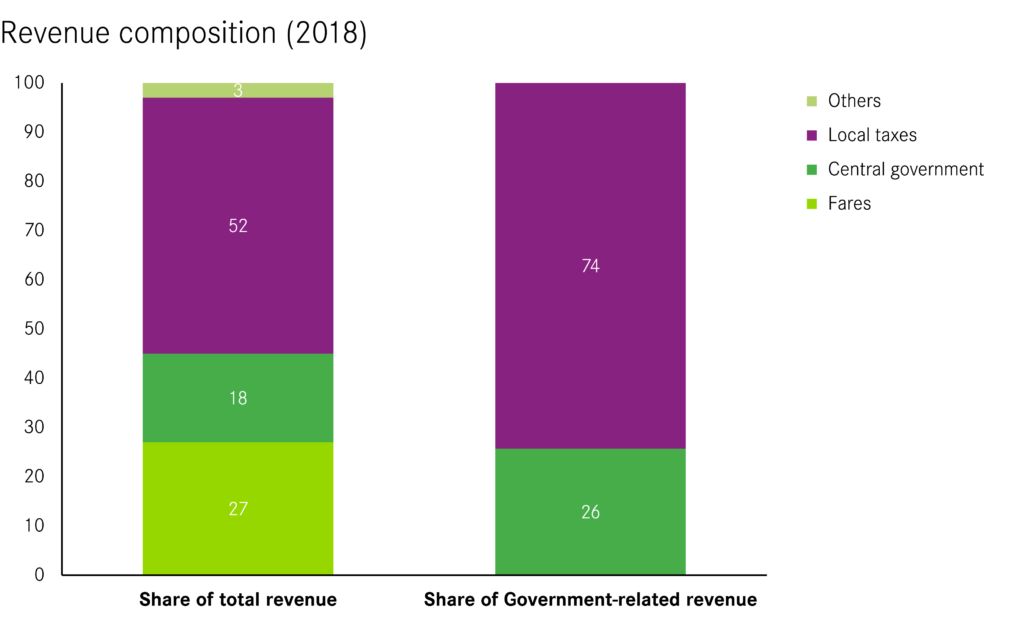 The Parisian funding model, by raising revenue with VT, stems from a belief that the transport network is for the city’s good and so should be funded by most of its population. By collecting revenues from most of its workers, regardless of whether they use the network regularly, this approach charges working residents who indirectly benefit from the public transport system (i.e. better air quality and less congested roads). Raising revenue through VT also ensure fares are relatively affordable (around £65 a month). In addition, this system makes local authorities less vulnerable to both central policy (i.e. cutting existing subsidies) and ridership, which is a significant factor in a post-pandemic world.

Unlike Hong Kong’s model, which relies on land development that could take several years to replicate, a VT-style contribution could allow TfL to raise further revenue in the short to medium term. Centre for Cities estimates that £1 billion could be raised (around the projected funding gap) with a 0.6 per cent contribution from London’s gross wages (on average £20.40 a month per worker).

Raising taxes of course would be politically difficult but a VT-style contribution would at least not be as regressive as raising council taxes. It would in principle free up public resources to invest in either other policy areas or elsewhere in the country.

In practical terms, London cannot introduce such a scheme without primary legislation because the local government does not have the powers to enact its own taxes. London’s congestion charge and the Workplace Parking Levy had to pass the same process. If the Mayor of London wants to move towards a Parisian-style model in the years ahead – to reduce TfL’s dependency on fares – fiscal devolution should be a core priority in negotiations with Government.

This blog is part of the TfL series, where the Centre for Cities explores different Mass Transit System funding models around the globe. The final piece of research of the series will set a range of policy recommendations, based on the models analysed.

The future of TfL

The second blog in Centre for Cities' TfL series shows that while Hong Kong’s mass transit operator may not be the answer to TfL’s short-term funding issues, it needs to be considered in the long-term.

The first blog in Centre for Cities' TfL series looks at how the pandemic has affected London’s transport network, and why TfL should move away from a fare-driven funding model.

Transport
How should Transport for London fund itself in the coming years?

Guilherme Rodrigues for the Institution of Civil Engineers (ICE)