The Levelling Up White Paper identifies the importance of cities in driving innovation and economic growth, and recognises that transport accessibility is hindering the performance of Britain’s largest cities.

Public debate in the UK frequently compares British cities to those in Western Europe, often in Germany, Netherlands, France or Scandinavia. However, when it comes to urban mobility, Spanish cities stand out. Notable policies include car-free superblocks in Barcelona; a city without cars in Galicia; and Seville claimed as the cycling capital of southern Europe.

Why have Spanish cities implemented such policies? In part, this is because Spain’s cities are denser than other urban areas in Europe, including in Britain. The Levelling Up White Paper also identifies a lack of density in Britain’s big cities as a factor in their underperformance. They will need to densify existing neighbourhoods if they want to boost public transport accessibility and level up their own economies.

The city of Barcelona shows how urban density can bring economic benefits through larger labour markets. As one of the densest cities in Europe, with its famous “superblocks”, Barcelona’s public transport accessibility is significantly greater than the UK’s largest cities (with the exception of London) even when compared with a larger public transport network, such as Birmingham’s (Figure 1).

Figure 1: The urban form of Barcelona allows its public transport system to be much more efficient than that of its European peers 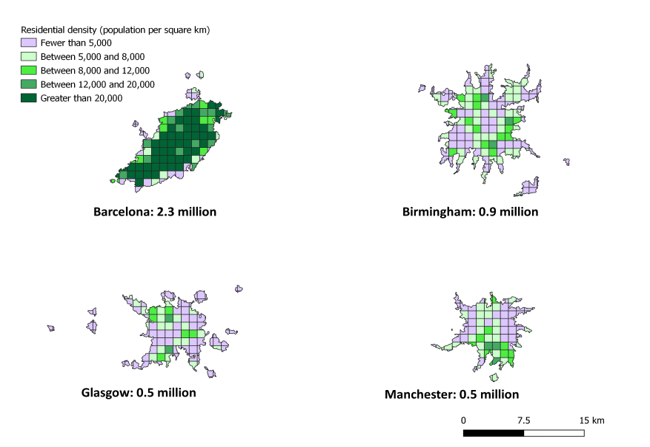 As a consequence, relatively good public transport accessibility boosts Barcelona’s economic performance because it increases the size of its labour market (“effective size”) and therefore the agglomeration effects it can achieve. Although Spain’s national economy is less productive than the UK’s, Barcelona’s productivity is higher than that of all large British cities outside London.

The benefits of urban density go beyond larger and deeper local labour markets. It also makes transport infrastructure investments more effective and feasible. Denser cities, by having thousands of residents living in the same area, both rely on and increase the feasibility of transport investments or active travel schemes than more dispersed cities. In effect, while infrastructure investments can supply more active travel schemes or public transport, urban density can boost its demand. This is likely to make transport schemes cheaper, better quality and therefore more viable for providers and cities.

Take Seville and Nottingham for example. These two cities have similar populations, but Nottingham covers an area four times larger than Seville’s (Figure 2). Between 2005 and 2010, Seville massively expanded its network of segregated bike lanes from seven to 74 miles, contributing to an eleven-fold increase in bike trips. But replicating these investments in Nottingham – a local authority with a municipally-owned bus operator where pre-pandemic bus ridership was outperforming other large cities – is unlikely to bring the same benefits. The low-rise urban form which dominates Nottingham, and most British cities, forces residents to take longer commutes and rely on cars, reducing the demand for active travel schemes and public transport investment.

Lower demand (caused by low density neighbourhoods) reduces the financial viability of public transport expansions, making British cities less attractive for workers who commute to city centres and the businesses that rely on them. This hinders the growth of local economies and the levelling up agenda.

Spain’s high urban density also leads to non-economic benefits such as the high quality of Spanish urban living. For example, the city of Pontevedra has repeatedly gone viral for going car-free. But what activists who have called for similar measures in British cities do not always realise is that 50 per cent of Pontevedra’s population (100,000 people) lives within three square kilometres in and around the city centre, as Figure 3 shows. This allows its population to simultaneously benefit from high urban mobility and avoid the social costs of private vehicles.

Figure 3: A car-free city centre directly benefits more residents in Pontevedra than it would in the British context 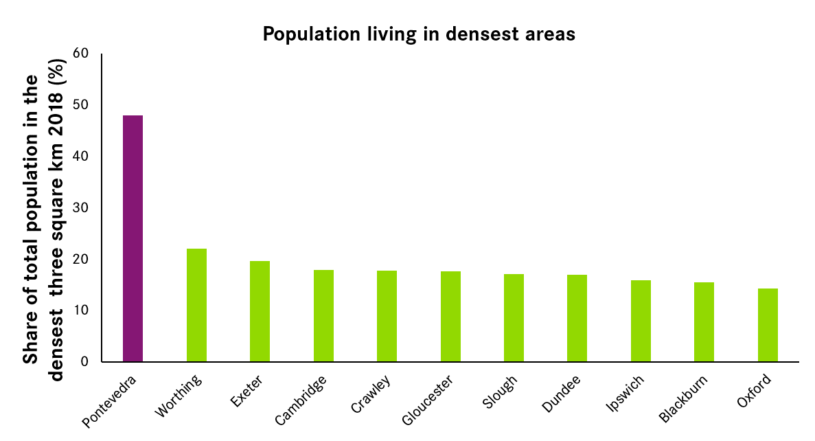 Pontevedra’s residents do not just enjoy higher road safety, lower congestion and air pollution in their neighbourhoods; the density of the city also puts jobs and the high street in easy access, even without a car. Meanwhile, only around 15-20 per cent of the population of comparable British cities live in a similarly-sized area of land. Going car-free in British cities will be politically harder and could negatively impact urban mobility because they lack dense urban cores.

Spain’s successful approach to urban policy does depend on a rather different approach to urban living than British cities though. The majority of Spanish people live in flats (65 per cent, more than in any other European country; see Figure 4), compared to only 15 per cent in the UK, where most people live in detached and semi-detached homes. The UK falls below all EU countries except Ireland.

Figure 4: Spanish urban form is much more similar to Korea’s than to the UK’s 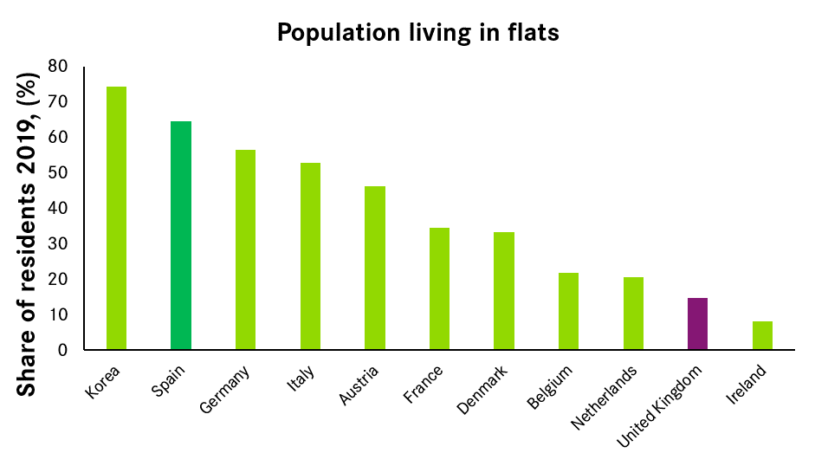 This does not mean that all cities should be expected to become Barcelona overnight. There is lots of potential for certain neighbourhoods, especially those close to public transport stations, to densify and capture disproportionate benefits without changing the nature of most urban neighbourhoods in Britain.

We should also not expect all cities in the UK to benefit equally from mid-rise apartment living. Urban density would make an outsized positive contribution to larger cities that suffer from both weak public transport accessibility and high congestion.

To improve public transport connectivity to the levels observed in Western Europe, the Government’s money for public transport infrastructure needs to be spent while it builds more homes in areas with good transport networks. To achieve this, the levelling-up strategy should commit to bold changes in the current planning system, which does not promote the densification of existing areas. Moreover,  releasing parts of the green belt next to train stations could bring more than two million new homes to Britain’s largest cities.

Government should see the recently announced £1.5bn Brownfield regeneration fund as a tool to improve public transport connectivity; it should use this fund to increase the number of residents or jobs in areas with good public transport links. Meanwhile, local authorities should pursue a similar strategy with Local Development Orders (LDOs). The rules-based nature of LDOs would allow local authorities to plan midrise housing near existing and new public transport infrastructure.

City Minutes: How do transport networks in big UK cities measure up to their Western European peers?