September marks the end of the furlough scheme. Centre for Cities UK Unemployment Tracker, with the latest release of claimant count data and job postings data from Indeed, shows how cities’ local job markets across the country are recovering and where people are most vulnerable to furlough.

As of September 2021, around 2.1 million people were claiming either Job Seekers’ Allowance or the work-component of Universal Credit. Despite recording the lowest number of claimants since the start of the pandemic, the number of claimants only fell by around by 65,000 in September. When compared with March 2020 (before the first lockdown), there are now around 806,000 more claimants and more than half (564,000) of those are in cities or large towns.

There was a small decline in claimants in all British cities.

Despite recent improvements, all cities continue to have a claimant count rate above their March 2020 levels.

Places reliant on the aviation industry (Slough, Crawley and Luton) have some of the largest differences between pre and post pandemic claimants (see Table 2). This helps explain the differences between cities with similar claimant count rates: both London and Sunderland have a claimant count around 6.3 per cent; however, London is 3.3 percentage points above its pre-pandemic levels, compared to 1.2 percentage points in Sunderland. This means that Sunderland’s labour market is much closer to pre-pandemic levels than London’s, where city centre activity remains significantly below pre-covid levels due to a lack of tourists and the continued slow return of workers to the office.

Furlough declined the most where it was previously the highest

The percentage of workers on the furlough scheme, as of August 2021, continued declining in all cities – as it did in the previous months. For the first time, all cities had a take-up rate below 10 per cent.

The places that saw the sharpest percentage point declines in furlough take-up were mostly the ones with the highest rates, as Figure 1 illustrates. The most notable exceptions were Liverpool and Oxford, where furlough rates fell significantly when compared to cities with similar take-up rates. This does not seem to be driven by layoffs, as claimant count did not increase during the same month.

Figure 1: Sharpest declines in the furlough scheme are mostly in places with high take-ups 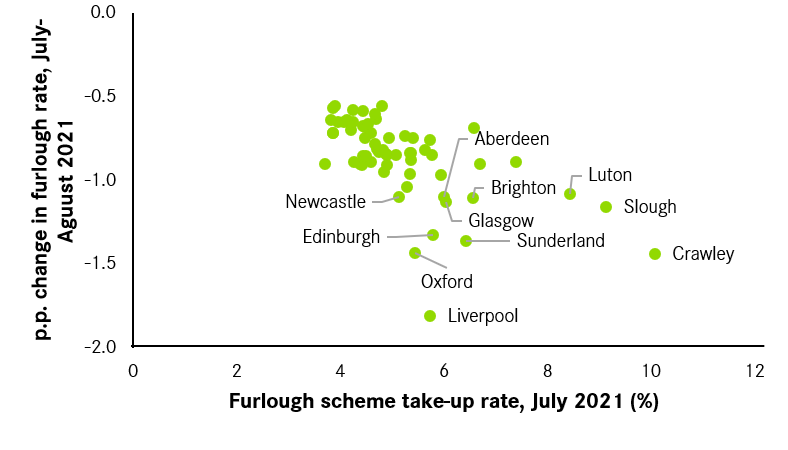 As the economy reopens, the number of jobs postings from Indeed have risen gradually, with Aberdeen being the only city where postings are still below February 2020 levels. Postings have seen the strongest recovery in cities where labour markets are closer to pre-covid levels such as Middlesbrough or Swansea.

In contrast, alongside places reliant on aviation, the large cities of London, Manchester and Leeds are currently in a more fragile economic position: the claimant count in these cities continues to be much higher than in March 2020, while new job postings have not been that strong (see Figure 5, top left corner). These three cities combined – which have around 20 per cent of the UK’s population – account for 27 per cent of all workers on furlough and 34 per cent of the claimant count variation above March 2020 levels.

Figure 5: Aviation towns and some of the largest cities have both comparatively few job postings and high claimant count

Some cities have been recovering fairly well from the crisis, with high numbers of vacancies in particular. That said, the end of furlough is likely to impact unemployment everywhere, with aviation towns and some of the largest cities most vulnerable.

Next month’s data release will help understand how exactly this is playing out.

July 2021: What do the latest statistics tell us about the labour market after ‘Freedom Day’?

Guilherme Rodrigues analyses the latest claimant count and job postings data and warns that some cities look particularly vulnerable as we approach the end of the furlough scheme.

Coronavirus Unemployment
What do the latest furlough statistics tell us about labour markets in the UK’s largest cities and towns?

Data from this month's update shows a recovery in all cities and large towns, however, significant challenges remain for places.