Women are increasingly prominent among the urban self-employed. Back in 2004, just 17 per cent of those self-employed in a city in England and Wales identified as female but by 2016 this had jumped to 31 per cent. Even so, they still represent a minority, as our recent report Self-employment in cities finds. Given that women account for nearly half of all those working in a city, self-employment is considerably less diverse than other forms of employment.

But, a self-employed person is more likely to be a woman in some cities than others, as the map below shows. In Cambridge the split is edging towards 50/50 with women currently accounting for 42 per cent of the self-employed. The neighbouring city of Luton is a different story. Here, only 20 per cent of self-employed people are female. 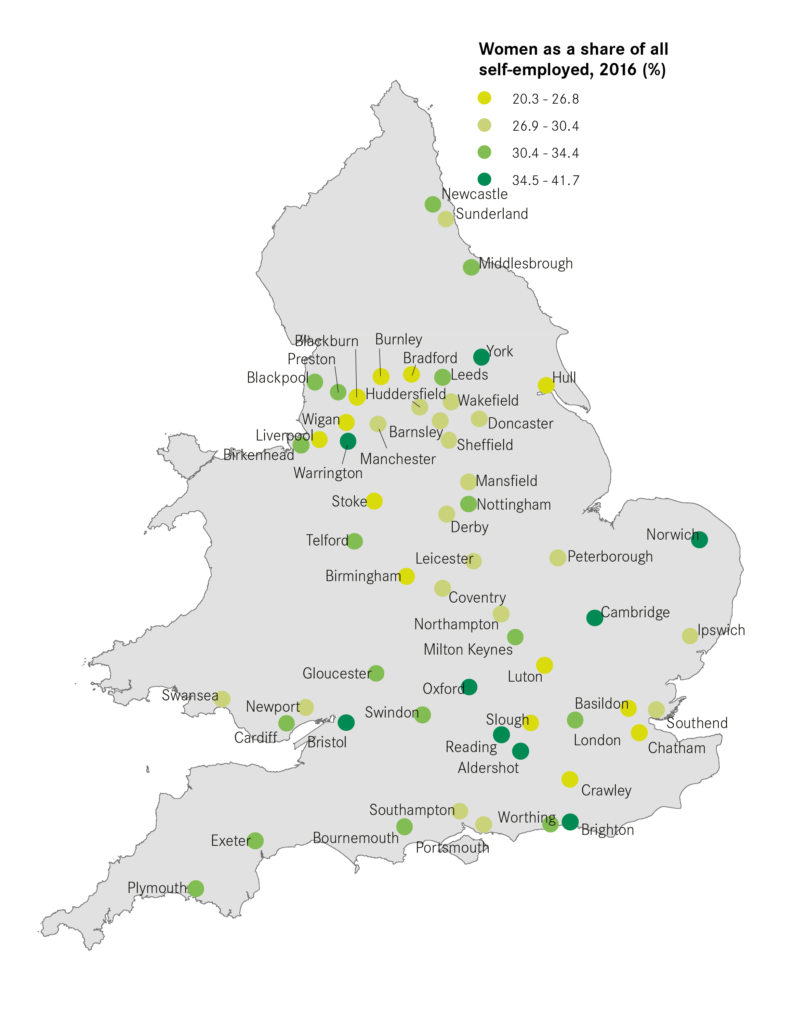 What is causing this variation? A city’s gender split is influenced by three main factors:

1. The popular industries for the self-employed in the city

In some cities – such as Luton and Slough – the construction and transport industries are more dominant within self-employment, while others – such as Cambridge and Oxford – have more of a focus on health and professional services.

This matters because these industries have very different gender splits. In construction, just 2 per cent of the self-employed are women and the figure is nearly as low – 9 per cent – in transport. In stark contrast, three quarters of those working in healthcare are female. This is why we find Cambridge and Oxford with far more self-employed women than Luton and Slough. The most gender balanced industries are food, accommodation and education, where women make up roughly half of the self-employed.

2. The prominence of high-skilled occupations among the self-employed

A self-employed woman is almost twice as likely to be in a high-skilled occupation as her male counterpart. In 2016, only 17 per cent of self-employed men were in these roles compared with 32 per cent of women.

3. The likelihood of the city’s self-employed having an additional source of income

Self-employed women are more likely to have an additional source of income than self-employed men. In total, three-quarters of urban self-employment is the individual’s only job. But in some cities in the North of England, such as Blackburn and Burnley, the share of the self-employed in this position is over 80 per cent.

So in summary, the gender balance of a city’s self-employed people is not driven by city-specific factors. Instead, it is industries, occupations and patterns of work which dictate the diversity of self-employment.

This raises interesting questions. Are there barriers preventing more women from becoming self-employed, both generally, and specifically in the construction and transport? Will the growth in female self-employment continue, or will it be limited by the dominance of these industries? If automation, such as driverless cars, disrupts male self-employment will they turn to another form of self-employment, become employed, or leave the workforce entirely?

As government considers how to adapt policy to better support the self-employed, it’s important these questions are answered to ensure this type of work is equally accessible to all.

Rebecca McDonald has now left Centre for Cities, please contact Elena Magrini, the other author of the report if you have any questions.

Please note this work contains statistical data from HMRC which is Crown Copyright. The research datasets used may not exactly reproduce HMRC aggregates. The use of HMRC statistical data in this work does not imply the endorsement of HMRC in relation to the interpretation or analysis of the information.