In his Budget this week the Chancellor set out the final parts of his relief package to help firms facing the largest increases in business rates cope with the changes they’re likely to face. Many commentators have called for measures to ease the shock of these increases. What they probably haven’t realised is that the introductions will mainly help London businesses, and it will be northern companies that will foot the bill.

There are two parts to the overall relief package that the Chancellor has put together to deal with changing business rate bills. The first includes the announcements made in the Budget – cuts for pubs, help for small businesses no longer eligible for relief as a result of the valuation of their property going up, and a £300 million hardship fund for local politicians to help local businesses of their choosing. All of these changes will be funded by the Exchequer.

The second part is transitional relief, a fund that was used after the last revaluation of commercial property in 2010 to deal with cliff-edge increases and will be used again from April. But there is a catch with this relief – unlike the other part of the relief package, it must be revenue neutral. So any cap on increases for businesses seeing the largest increase in their tax bill must be matched with a limit on the size of the decreases of those businesses set to see the largest falls. As we showed earlier in the week, businesses in London will be hardest hit by the revaluation of commercial property. This means that it will be mainly the capital’s businesses that stand to benefit. And it will be companies further north footing the bill. 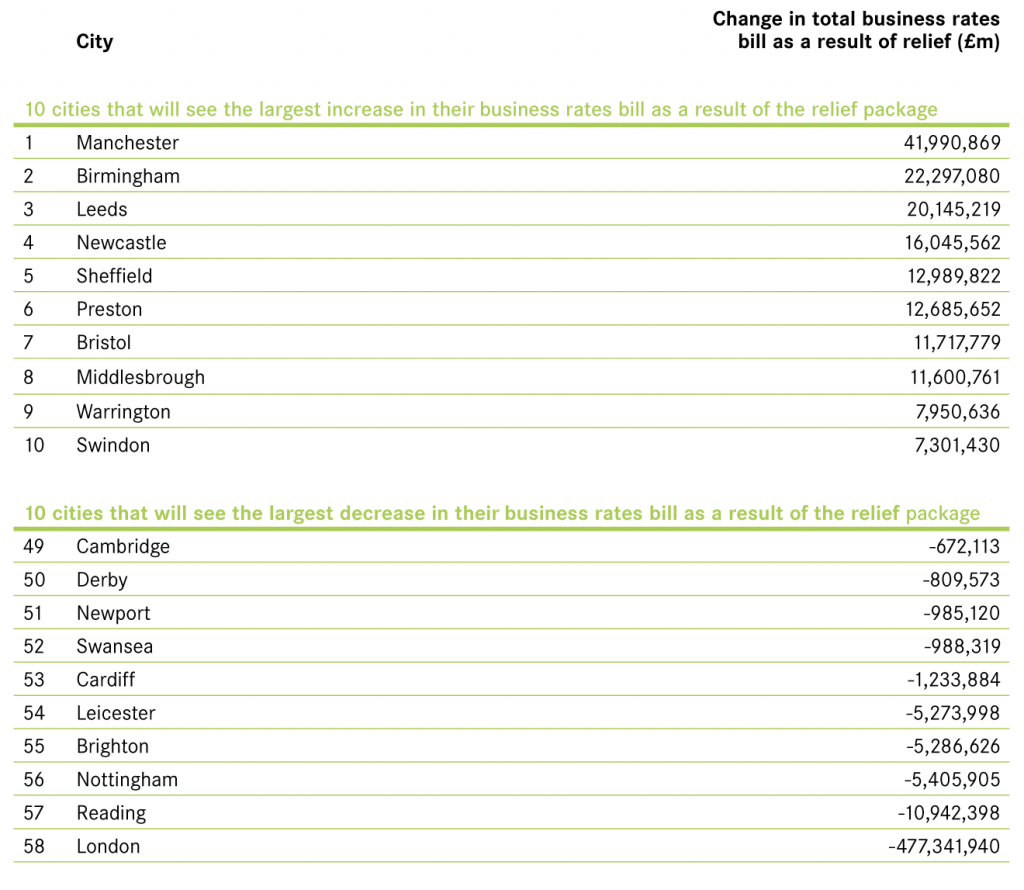 The delay to revaluation has meant that businesses in struggling areas have been paying too much tax in recent years because their properties have been overvalued by the taxman. They will finally see a fall in their rates from next month. But this fall will not fully reflect the reduced valuation of their property because their reductions have been limited to fund relief elsewhere.

The result is that these businesses will continue to pay more tax than they should. In Manchester we estimate that this will be to the tune of £42 million, which will be used to help cover the near £500 million of relief for London businesses.

The sector that stands to be hardest hit by this is retail (somewhat ironically given that the anti-rates lobby has focused on the impact that revaluation will have on small retailers). Retailers in London will get welcome relief, including Harrods and Selfridges which are set to get relief worth a combined £1.5 million. But we estimate that the relief package will mean that the total business rates bill for shops in Birmingham will go up by £10 million next year, while it will be £27 million higher in Manchester.

To be clear, helping London businesses deal with the increases is a good thing – the cliff-edge increases they face are a fault of policy, and it’s right to help them. But making businesses elsewhere fund this, who have already been overpaying for many years, is not the way to do so.

The following two things need to happen to correct the fault in the system:

Taking these steps would have helped to make business rates fairer, more accurate and less volatile. By failing to do so in the Budget, the Government has missed a big opportunity to address the problems in the business rates system.