Since the election there has been lots of discussion about using R&D as an instrument to level-up the country.

The question is how can policy makers best support more innovation-led growth in the North and Midlands?

A recent Brookings / ITIF report has an interesting, and I think credible, answer to this question based on observations from the US.

Before getting to the proposed approach it’s worth setting out what the problem in the US is as it has many similarities to the situation in the UK.

According to the report’s authors “regional divergence has reached extreme levels in the U.S. innovation sector”.

They find that the innovation sector — composed of 13 of the highest-tech, highest R&D ‘advanced industries’ – makes a huge contribution to regional and US prosperity. They generate 6 per cent of the country’s GDP and 25 per cent of its exports.

But, as the map below shows, over the last decade or so the innovation sector has been concentrating in a short list of ‘superstar’ cities. Just five metro areas—Boston, San Francisco, San Jose, Seattle, and San Diego – accounted for more than 90% of the country’s innovation-sector growth between 2005 and 2017.  As such, these areas have increased their share of total innovation employment from 17.6 per cent to 22.8 per cent. In contrast, the bottom 90 per cent of metro areas (343 of them) lost their share. 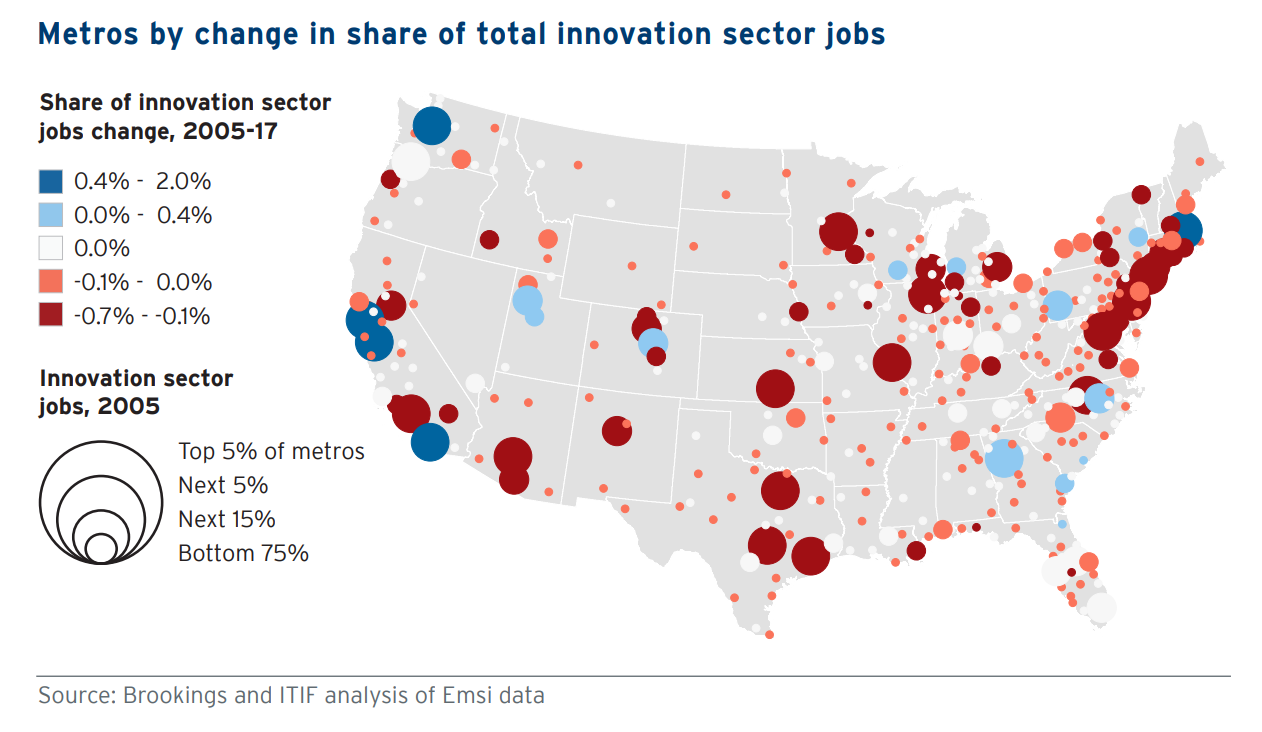 They argue that such extreme regional inequality is now a serious national problem. The concentration of R&D in a tiny number of cities is cutting off huge swathes of Americans from the high skilled jobs and industries that make them more prosperous and the economy more productive.

We see similar parallels in the UK, where cities such as London, Oxford and Cambridge take the lion’s share of our knowledge intensive innovation – to the detriment of the North and Midlands.

Significantly the authors conclude that markets alone won’t solve the problem of innovation fuelled regional divergence and argue that place-based interventions will be essential.  They state that old assumptions about bottom-up economic development no longer hold firm in the twenty first century.

The authors call for the Federal Government to create eight to 10 new regional “growth centres” across America’s heartland.  The time is right they say for a “21st century update of ‘growth pole’ strategy—the 1960s and 1970s emphasis in regional economic planning that called for focusing transformative investment in a limited number of locations to catalyse the take-off of those places and the nation.”

In particular they call for the federal government to: assemble a major package of federal innovation inputs and supports for innovation-sector scale-up in metropolitan areas distant from existing tech hubs.

Central to this package would be a direct R&D funding surge worth up to $700 million a year in each metro area for 10 years. In addition, there would be complimentary inputs such as workforce development funding, tax and regulatory benefits, business financing, urban placemaking, and federal land and infrastructure supports.

They estimate that the price of such a program focused on 10 metro areas would cost the federal government approximately $100 billion over 10 years, which they note is substantially less than the 10-year cost of US fossil fuel subsidies.

The authors also advocate a competitive process for selecting the most promising potential growth centres to receive the federal investment.

The report identifies 35 metro areas that have the potential to be growth centres, including places such as Cincinnati, St Louis, Pittsburgh, Salt Lake City and Detroit, many of which are situated in the American ‘heartland’ and are far removed from the coastal superstars.

The ideas have been well received by both Democratic and Republican politicians at both a federal and local level in the US.

Is such an approach appropriate in the UK?

I think it is. The problems of spatial inequality are well known in the UK; on some measures the UK is the most spatially uneven country in the OECD.

These problems are not only large, they are persistent. This suggests that any attempts to ‘level-up’ the country will need to be of a scale and focus that matches the scale and nature of the problem. Whilst the UK has a long history of regional policy with the aim of ‘rebalancing the economy’ there is a fair critique of these approaches that they have never been of serious intent.

What would the selection criteria be?

In the UK, criteria for selecting places would be similar to those proposed in the Brookings / ITIF report, a combination of:

Based on these criteria potential candidates in the UK would include Manchester, Coventry, Cardiff, Nottingham, Leeds, Bristol, Derby, Birmingham, Glasgow, Leicester.  These cities, to varying degrees, have foundations and potential upon to build.

It’s important to note, as the report does, that the growth centre proposal will not solve all the challenges and issues faced by cities and towns across the UK and the US.  The proposal should be seen as but one component, albeit an important one, of the comprehensive approach needed to address the unbalanced economic geography in both countries.