What springs to mind at the mention of struggling high streets? Images of boarded-up shops and rows of deserted buildings are popular choices. Most coverage of the fate of the British high street looks at how many shops are now empty, but examining the quality of retail on our high streets is also important.

Our research has shown that vacancy rates vary hugely across the country and not all high streets are having a bad time. Using data from the Local Data Company, our latest analysis shows that not only do the UK’s most successful city centres have fewer empty shops, the businesses filling these units are also of much higher ‘quality’ of retail, such as high-end shops. Cambridge has the lowest vacancy rate of all UK city centres and is the most dominated by premium retail, with a third of shops falling into this high-quality group. In Birmingham, which has undergone significant redevelopment in the last two decades, a fifth of retail is premium and only 10 per cent of shops are empty.

In stark contrast, on struggling city centre high streets the retail offer is much poorer. Not only are there many more empty shops, but those that are occupied are also more likely to be discount stores or charity shops than restaurants or boutiques. Take Wigan for instance, where 21 per cent of the high street is empty and 37 per cent of the remaining shops are these ‘value’ stores, or Newport where a quarter of shops are empty and only 3 per cent are premium shops. 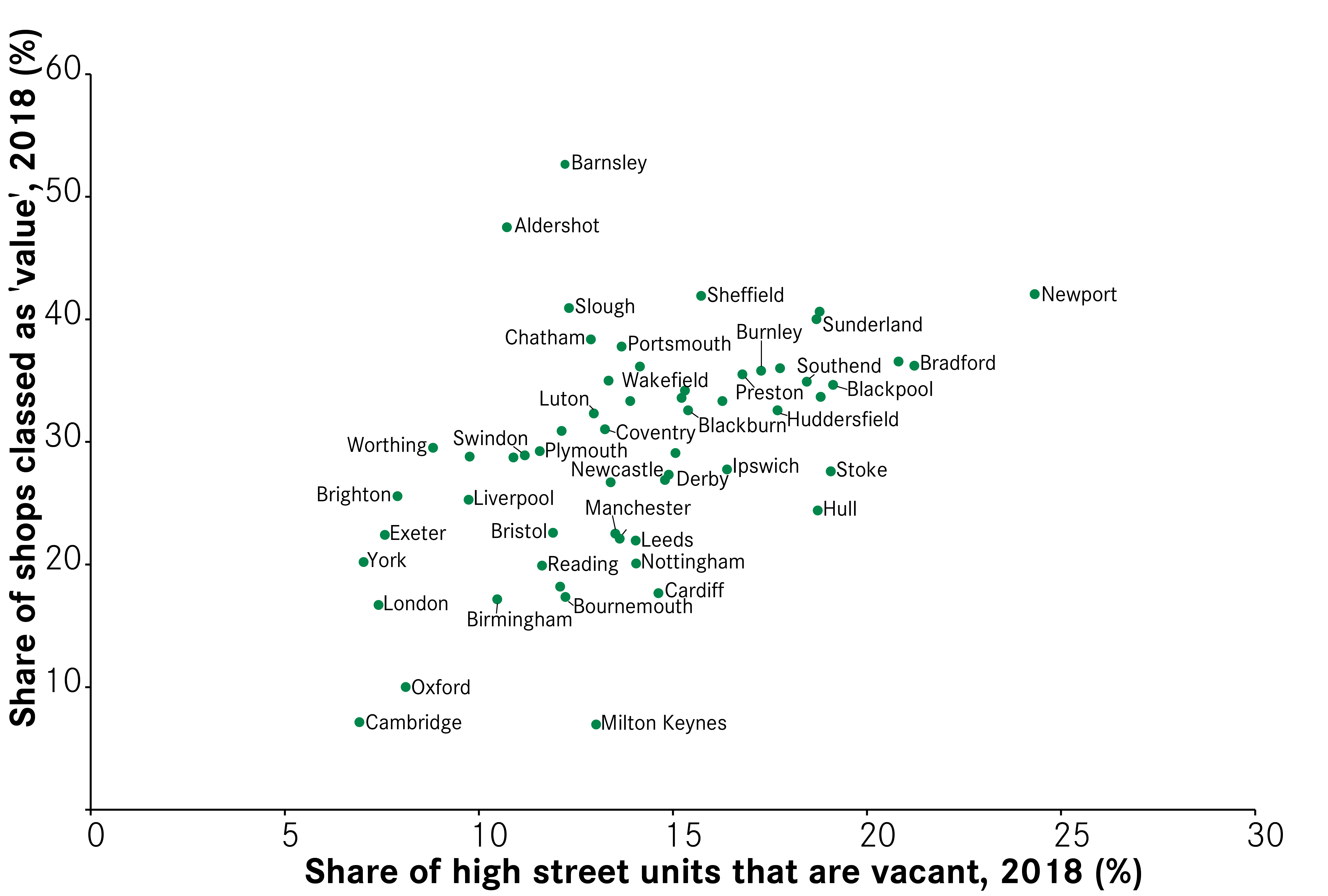 This variety stems from the underlying economic performance of each city centre. Those that have attracted lots of high-skilled, well-paid jobs and have a diverse mix of office, leisure and retail can generate sufficient spending power and footfall to sustain not only more shops, but also a higher share of more ‘luxury’ brands. Where residents earn less and few jobs are found in the city centre , it’s much harder for these high-end stores to exist. Instead, there are more discounters and charity shops.

But the relationship between premium and empty shops is not quite as straightforward as it seems. While city centres with fewer vacancies tend to have more premium brands, the UK’s largest cities punch well above their weight when it comes to high-end shopping. As the table below shows, Birmingham, Manchester and Leeds are all top ten UK city centres for premium shopping, despite their higher vacancy rates.

The size of these cities is likely to be the most important reason behind this specialism. The sheer number of workers, residents and visitors travelling into the UK’s larger cities allows them to support a broader range of amenities, and it is no different for retailers.

Stories of the decline of the high street conjure up images of empty units and charity shops. Those two things go hand in hand and stem from the same cause – a lack of jobs in these city centres. The lesson from successful city centres is that the high street is not dying everywhere. But if struggling high streets are to turn around, both in terms of the volume and types of shops they support, then policy must focus on improving the wider city centre economy, rather than just focusing on the high street itself. You can read our recommendations in our report out today City Centres: Past, Present and Future.