Recently released primary school data shows that one in five 11 year olds did not achieve the expected level (level 4) in reading, writing and maths in 2014.

Educational attainment even at primary school age has an important bearing on young people’s life chances. At present, there’s a less than one in 15 chance that these pupils will go on to achieve five good GCSEs including English and Maths (2 in a classroom of 30) and there’s a much higher chance they will end up NEET.

It also matters to city economies. Cities with lower educational attainment rates tend to be less economically buoyant. The fact that there’s a 13 percentage point gap between cities in attainment rates at primary school may serve to widen the economic gap as a result.

Cities in the North West tend to fare relatively well on this measure with five cities ranking in the top ten. Warrington has the highest attainment rate of all English cities.However, no other city in the North or Midlands ranks in the top ten and less than a quarter rank in the top 20. Policies to improve the economic prospects of the North must start with schools.

Low educational attainment is not a problem confined to the North though. The South East is split with cities ranking among the top and bottom cities: Aldershot, Southampton and Brighton rank in the top ten, while Oxford and Worthing have among the lowest attainment rates in the country. Low attainment rates in some of the country’s most economically buoyant cities raise questions about whether this will lead to rising inequality in these cities and how economically sustainable they’re likely to be.

Figure 1: Percentage of pupils achieving level 4 or above in writing, reading and maths, 2014 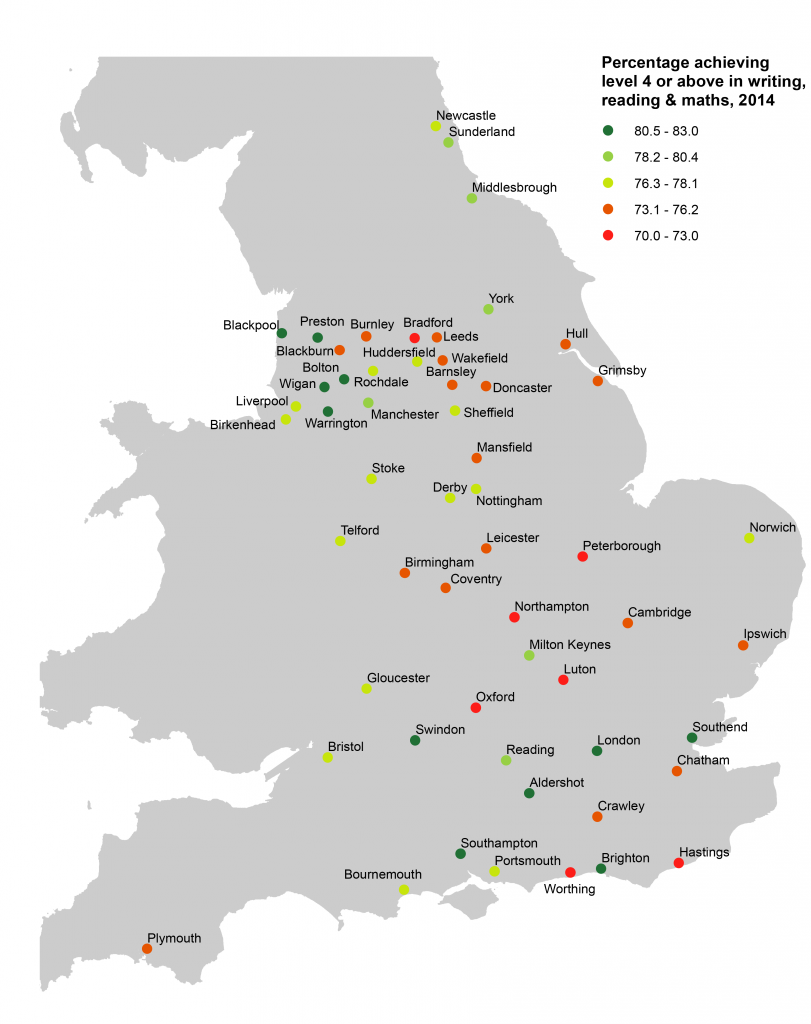 It’s clear that there are significant differences between cities, but what about differences within cities? Social background is the strongest predictor of educational attainment: overall disadvantaged pupils (those eligible for free school meals or looked after children) are 20 per cent less likely to finish primary school reading and writing at the expected level. The good news is the gap is closing.

The bad news is that in some of English cities the gap still reaches nearly 30 per cent. In Wakefield, less than 60 per cent of disadvantaged pupils achieved the expected level in the “Three Rs”; the respective figure for other pupils in the city is 82 per cent.

London continues to demonstrate that pupil background does not have to pre-determine how well you do at school. The attainment gap in the capital is just 11 percentage points. The gap is even smaller in Luton but this reflects low overall attainment rates in the city.

Figure 2: Percentage of pupils achieving level 4 or above in writing, reading and maths, and the attainment gap between disadvantaged and other pupils, 2014 (% point difference) 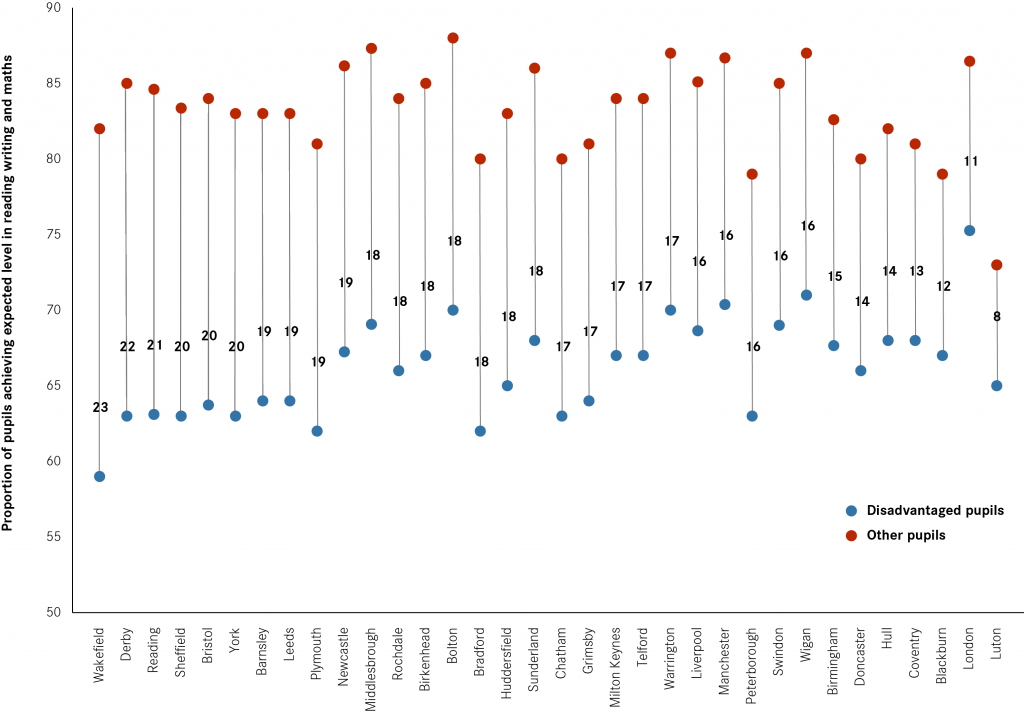 So why do young people in some cities appear to do so much better at school? Social background can only explain part of the difference between cities; it’s not necessarily the case that cities with large proportions of disadvantaged pupils will do less well overall. London is a prime example here. In reality, there are a whole range of observable and unobservable factors that impact on how well a child does at school, meaning there is unlikely to be a simple solution.

The experience in London also highlights our lack of understanding of how policy can make a difference. The IFS finds that improvements in outcomes at GCSE level were not driven by secondary schools as previously thought, but by primary schools. What caused the improvements in primary schools is not clear; there may be a link to the pilots run in London as part of the National Literacy and Numeracy Strategies, but no one can say so with any degree of certainty. If there is, it’s not clear why other cities didn’t see the same improvements when the programmes were rolled out across the country.

It is crucial to improve our understanding of what and how to make a difference to the chances of children and young people doing well in education – both for them and the cities they live and work in.