One of the big news stories from yesterday’s Budget was the introduction of a compulsory National Living Wage (NLW), starting at £7.20 and rising to £9 an hour by 2020, raising the ‘effective minimum wage for those aged 25 and above by over 13 per cent by 2020’. It’s broadly seen as good news at a time when real wage growth has been stagnating, but it also raises a number of questions. Will the wage increases be enough to offset cuts to tax credits? Will there be a cost to employment? And how will this all play out across the country?

Figure 1: Proportion of minimum wage jobs in cities (workplace based), 2013 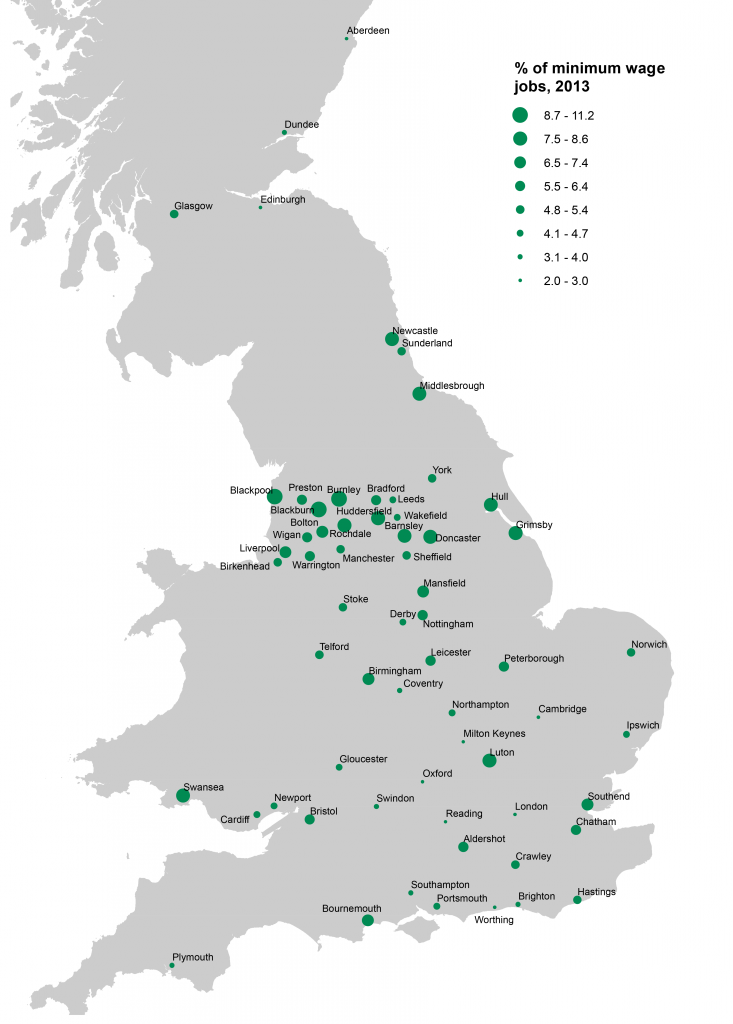 But the introduction of the NLW has to be seen within the broader context of 1) cuts to tax credits, and variations in 2) business performance and 3) cost of living across the country.

The cities most likely to be impacted by the introduction of the NLW are also those that are most reliant on in-work tax credits (Figure 2). According to IFS’ post-budget analysis, 7.4 million in-work families will lose an average of £280 a year due to the Budget’s freeze on working-age benefits. It’s difficult to assess whether higher wages will offset reductions in tax credit – the most significant change in revenue terms – as the latter is dependent on family circumstance. The IFS point out that the gross increase in employment income from the higher minimum wage is about £4 billion, while tax credit spending is due to be cut by £6 billion. So while pay-packets in Blackpool and Burnley may increase, family incomes may decrease overall. 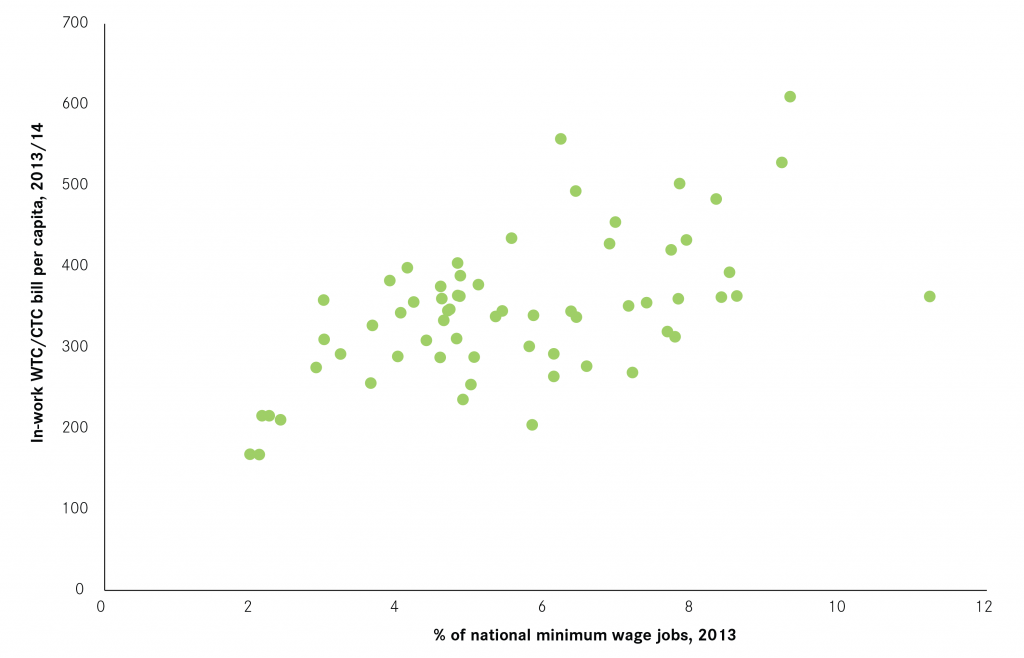 The other consideration is the impact on employment. The OBR estimates increased labour costs could lead to the loss of 60,000 jobs – less than 0.4 of jobs nationally but roughly equal to the number of jobs in Blackburn. Given variation in business performance across the country, it may be more difficult for businesses in some cities to absorb increases in their wage bills and this may lead to a higher increase in unemployment. Ensuring these businesses are supported to improve their performance, either directly or indirectly through improvements to the wider business environment, will be an important part of mitigating these risks.

In cities where the NLW will have much more limited impact, the big concern is the high cost of living and the impact it has on standards of living. The London Living Wage is already set at £9.15 to reflect higher costs in the capital. Housing represents one of the most significant costs to families and in the three cities where the NLW will have the lowest level of ‘bite’ (London, Cambridge and Oxford) average house prices are more than 15 times average wages. This begs two questions. Firstly, will the remit of the Low Pay Commission now change to include considerations around costs of living as well as employment and should it be extended to consider the impacts of introducing city minimum wages? Second, will the housing and planning announcements expected tomorrow do enough to significantly increase house building in these areas?