The UK’s housing crisis is fuelled by a simple imbalance of supply and demand – more people want to buy or rent a home than the number of homes available. As a result house and rental prices far outstrip wage growth. Although traditionally house price rises were trumpeted as a ‘win’ for owners, there is now growing recognition across the political spectrum that the unaffordability of homes is threatening quality of life, business growth, the sustainability of the welfare bill, and the performance of the national economy.

As a result, we have seen all the major parties in the run up to the General Election trumpet their commitment to building more homes:

It is great to see all the parties setting out their respective housing policies, but some critical omissions remain. Primarily, many of the proposals – such as the Tories’ Help to Buy and Starter Homes or Labour’s plans for rental security – focus on the demand side of the housing market, and not on increasing supply, which is essential to reducing the cost of housing. The supply targets we have seen so far have been too abstract, and small-scale to address the size of the challenge. All in all, a consensus that something must be done still leaves us a long way from a coordinated strategy that addresses where to build new housing, on what land, and how best to pay for them.

UK house prices are highest in and around economically successful cities. As the demand from businesses and workers to cluster around their opportunities grows, and housing supply becomes scarce, cities such as Oxford, London and Cambridge have become progressively less affordable places to live – even with some of the highest wages in the country. This is placing a strain on both firms and people, and threatening their future growth and their competitiveness as places to attract workers and do business. By comparison, other cities such as Blackpool, Wakefield and Bradford are struggling with stagnant and falling house prices resulting from a lack of demand. 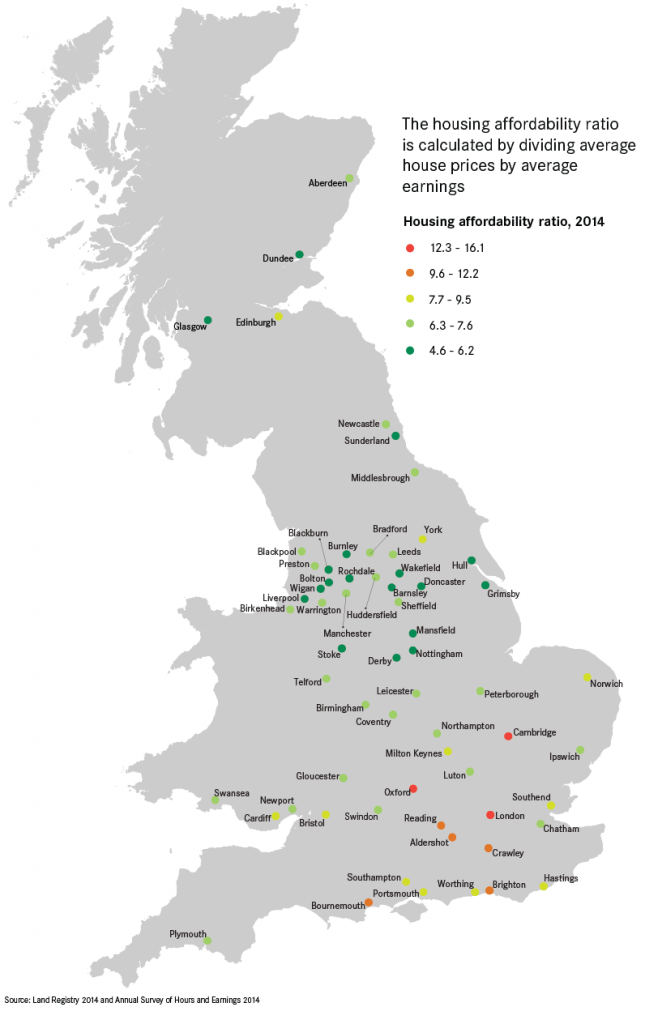 The variability of the housing crisis requires a similarly varied response. In particular, priority must be given to addressing the lack of homes in those places whose productivity and growth is most critical to the national economy – through building more homes closest to the jobs and opportunities of our high-demand cities.

This will require a balanced approach to finding more land:

To increase the amount of land available for housing, the government could capitalise on preferential borrowing rates and re-enter the housing market as funders or even house-builders. Government and local authorities could build hundreds of thousands of new homes on new or existing public land; servicing the costs through rental income or sales revenue, while providing the housing our most productive cities need to grow.

The good news is that the parties have acknowledged the need to build more homes to address this unprecedented housing crisis. The bad news is that we are still a long way from having a fully formed housing strategy from any of the parties, which will deliver the housing the UK needs, when and where it is most needed.

Read our Manifesto for more ideas on what the Parties should do to build a stronger urban economy.