A year ago today, the Prime Minister told us to ‘Stay at home, protect the NHS and save lives’. While we still find ourselves in lockdown right now, the success of the vaccine roll out suggests there might be light at the end of the tunnel bringing hopes of a quick recovery.

But just how bad has the impact of the pandemic been on the labour market of cities and large towns across the country? In a timely fashion, statistics released today by the Office for National Statistics can help us answer this question:

As of February 2021, approximately 2.7 million people in the UK are now either claiming the work component of Universal Credit or Job Seekers Allowance. This is the largest number of people who have ever claimed these benefits since the pandemic began, and since comparable statistics around this indicator began in 2013 (see Figure 1).

Despite some of the people claiming these benefits are actually still in work and not unemployed, and that the introduction of the Coronavirus Job Retention Scheme has inadvertently inflated the number of people in this category, these stats clearly show the labour market has significantly deteriorated over the past year. 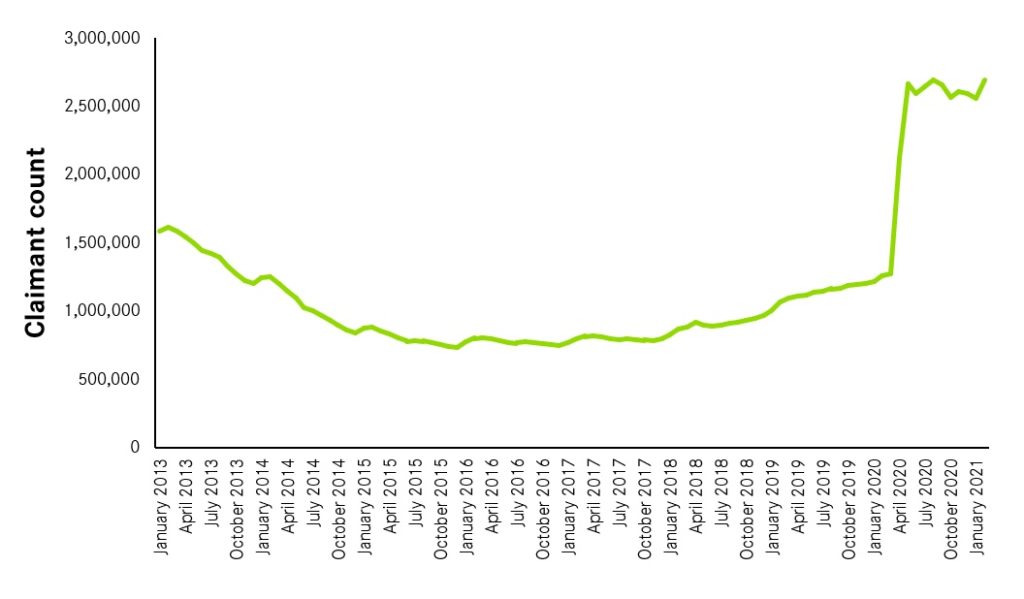 Every place is in a weaker situation compared to last year, and in some the claimant count rate is now two-digits

No city nor large town has been left unaffected by the events of the past twelve months (see figure below). At best, York, Exeter and Cambridge continue to have the lowest claimant count rates – at approximately 4 per cent, which is nevertheless twice as high as their claimant count rate back in March last year.

While places in the North and Midlands tend to have overall higher claimant count rates, it is some specific cities and large towns in the Greater South East of England that have been hardest hit by the pandemic. Crawley is the place which has seen the largest percentage point increase in the number of people claiming unemployment related benefits since March last year, followed by Slough, Luton and London.

Concerningly, while in other places the number of people claiming unemployment related benefits is stabilising, in these cities and large towns the labour market continues to deteriorate. Luton, Slough and Crawley are not just the three places that have been hardest hit since the pandemic began, they also have the largest percentage point increase in claimant count compared to last month. In contrast, Aberdeen, Telford and Gloucester had the smallest monthly percentage point increase in claimant count (see Figure 3).

While the Coronavirus Job Retention Scheme has undoubtedly helped prevent even sharper rises in the number of people claiming unemployment related benefits, it is already clear that the labour market today is in a much worse position than it was a year ago. The full extent of the damage will now depend on how quickly we will be able to exit this health crisis and on the timing of the withdraw of government’s support for businesses and workers.