Up until yesterday, the Chancellor was reluctant to extend the furlough scheme during this second wave of the Covid-19 pandemic for fear it would end up supporting jobs that were, in his opinion, ‘unviable’. His U-turn is much welcome, not least because it is reflective of the scale of the challenge many businesses in hospitality, food, arts and retail will be facing over the coming months. Now with new data released by HM Revenue and Customs, we can also see which places were still most reliant on the scheme as of the end of August, providing insights on which places needed these new measures the most.

1. London and its surrounding towns were the most reliant on the Job Retention Scheme as of the end of August

In line with the easing of restrictions, the number of people still on the furlough scheme towards the end of the summer was much lower than its overall use during the first lockdown in every city and large town.

Yet, there was still great variation across the country, with Crawley, London, Luton and Slough the places most reliant on the scheme. In these cities, approximately one in seven workers were on furlough at the end of August, reflecting the fact that the international travel industry did not pick up during the summer.

The largest cities also appear to be among the ones still most reliant on the scheme. London, Birmingham, Glasgow and Manchester are all in the top 15 for use of the furlough scheme at the end of August. Approximately 900,000 of the people on furlough at the end of the summer lived in these just four cities, accounting for 28 per cent of all furlough claims compared to 25 per cent of all eligible employments for the scheme. This might be related to the slow recovery of their high-streets, as we will explain further in new analysis we will publish on Monday.

2. The best performing cities were places that traditionally have otherwise weaker economies

As of the end of August, Middlesbrough was the city least reliant on the Job Retention Scheme, with workers half as likely to be on furlough in the city than in Crawley. With the exception of Swindon, all the 10 cities with the lowest take-up of the Job Retention Scheme at the end of August had above average claimant count levels in March, an indicator that suggests their economies were in a weaker position at the dawn of this crisis.

3. Overall high take-up of the Job Retention Scheme might not mean longer recovery for every place affected

Combining the data on furlough at the end of August with data about the overall use of the scheme provides interesting insights about the pace of recovery in different places.

Some places, like Crawley, London and Slough (top right quadrant in the figure below) appear to continue to be struggling despite the easing of restrictions. They were among the top 10 cities for overall use of the scheme and continue to be among the places most reliant on it.

This is however not the case for every place, and some places with overall high take up of the scheme did have much lower take up rates as of August (bottom right quadrant). Sunderland and Stoke for example, had roughly the same overall take-up rate for the scheme as Slough and Birmingham, but workers in these places were almost half as likely to still be on the scheme in August and this might be linked to the type of jobs that were being furloughed in different places. 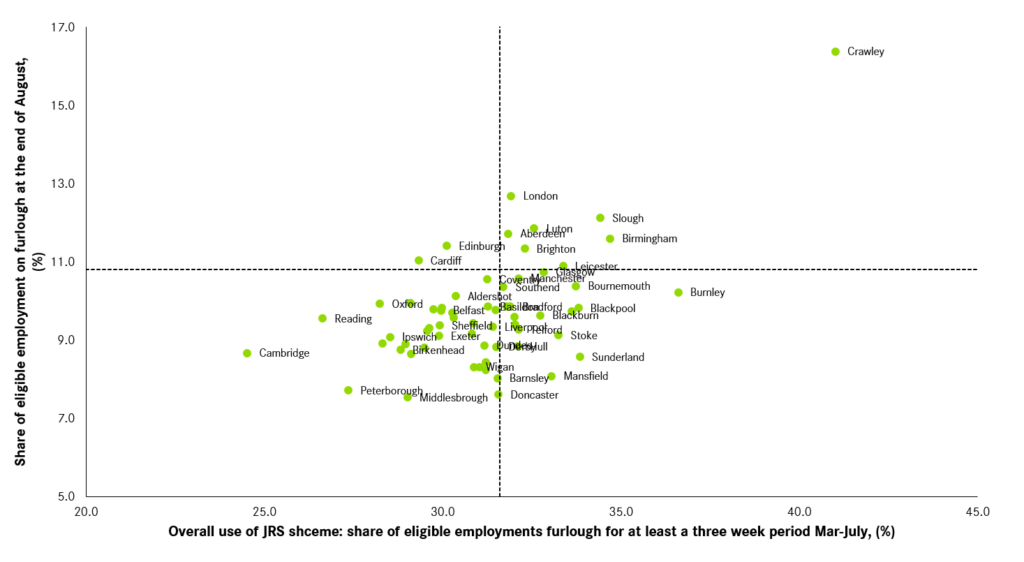 These findings appear to suggest that the furlough scheme has worked in its intent of protecting jobs during the lockdown, particularly in weaker economies. According to secondary analysis HM Revenue & Customs published yesterday alongside the official statistics, 90 per cent of the employees who left the Coronavirus Job Retention Scheme between April and July were still on their original payroll in August. This suggests that the lower take-up of the furlough scheme at the end of August is mostly driven by people returning to their jobs rather than being made redundant, meaning the scheme did support viable jobs which did stop using the scheme as the economy reopened.

As we enter tighter restrictions, it is clear businesses directly affected by these measures will turn once again to make use of Government’s support. This will be particularly the case for businesses in hospitality, food and retail as well as the arts and entertainment sectors. But what will be interesting to see in coming months is whether other businesses too will need to reverse back to the use of the scheme. And if this data is anything to go by at explaining how quickly different places will be able to bounce back as restrictions will be finally lifted – will Middlesbrough and Doncaster still be top of the list? 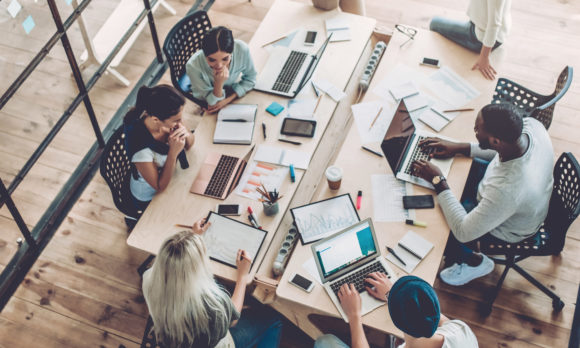 Coronavirus Levelling up The Future of Work Unemployment
Devolution Future of cities Levelling up
Conservative Party Conference: How do we level up health inequalities across the UK?