As of the 10 September, the total number of people claiming unemployment related benefits in the UK had risen to 2.7 million, its highest level since the 1990s. According to the latest data released this morning by the Office for National Statistics, the number of people claiming Universal Credit or Job Seekers Allowance either because they are unemployed or on low-paid jobs  is up by 1.4 million the figure in  March, meaning the overall claimant count rate for the UK is now at 6.5 per cent.

Unemployment is rising but at a slower pace

With the exception of a handful of places, this is true everywhere in the country. Of the 63 largest cities and towns, half have seen pretty much no increase in the number of people claiming unemployment related benefits compared to last month, and six places have actually seen a decline in claimant count. Only eight cities have seen an increase in claims of 0.2 percentage points or more over the past month. Unfortunately, these are mostly places that have seen fast growth in unemployment related claims almost every month since the lockdown, like Crawley, London and Slough.

Note: Data is not seasonally adjusted

There is much more variation across the country when looking at the cumulative increase in the number of people claiming unemployment related benefits over the past six months. Unemployment claims have risen everywhere since March, with York, the least affected city, seeing a jump of 2.3 percentage points. London, Slough, Crawley and Luton have been more affected than any other city and town and, as of September, their rise in unemployment related claims was twice as large that of the best performing cities and towns like York and Exeter.

As a result, these cities are quickly moving up the ranking when looking at the total number of people claiming. Luton and Slough are now in the top 10, while London and Crawley are in the top 15 – despite all of them entering the downturn with below average claimant count rates.

Alongside these places, the top 10 is populated by otherwise weaker economies. This month Birmingham has taken over Blackpool as the city with the highest claimant count in the country, and Hull is also in the top 3.  In contrast, York, Exeter and Cambridge continue to have the lowest claimant count figures among the 63 largest cities and towns. 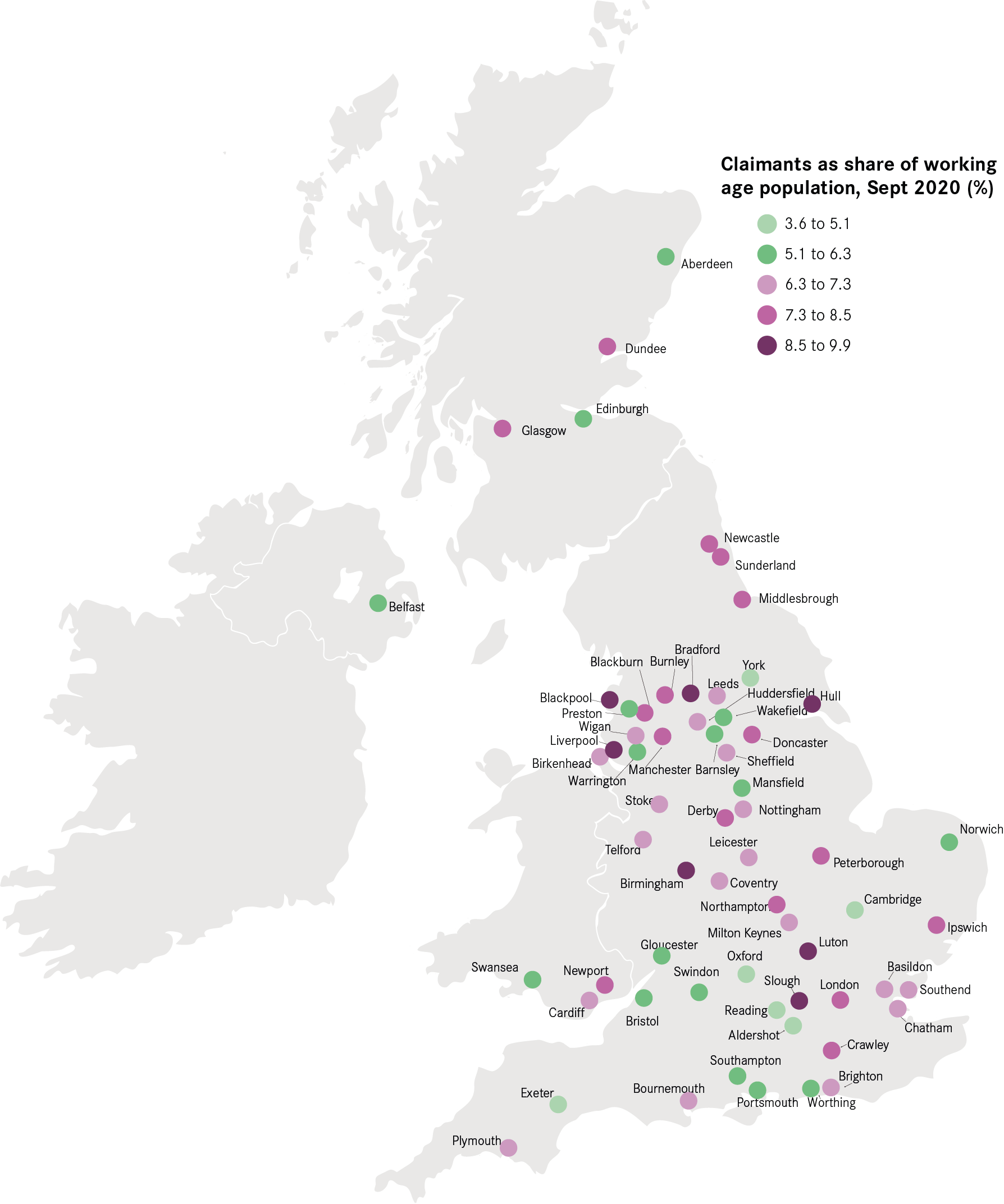 That overall there has been little change in the claimant count despite the decreasing generosity in the Job Retention Scheme from August is good news for the economy. But the increase in Covid restrictions in recent weeks are likely to put further pressure on hospitality and leisure businesses in particular. The question now is whether the extension in support announced by the Chancellor last week will be enough to stop further jumps in people claiming unemployment related benefits in the coming months.

Explore the data in our tool comparing labour market statistics across cities and large towns in the UK.