This month’s labour market figures show the continuing strengthening of the UK labour market, as unemployment once again falls. This improvement has been experienced by all age groups, including those aged 16-24, although the unemployment rate of this groups remains above average, at 3.2 per cent across the UKs 64 largest cities compared to 2.5 per cent for all workers.

The high level of youth unemployment means this age group receive a lot of attention in the media, but looking at long–term (one year plus) unemployment shows that unemployed young people are actually much less likely to be long-term unemployed than those aged 25 or over.

Table 1: Proportion of claimants that are long-term unemployed 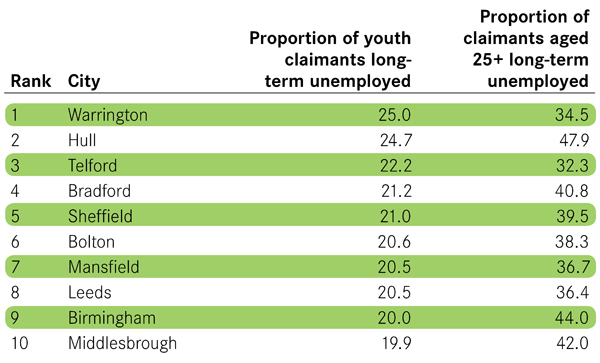 This is not to say that polices focusing on young people aren’t important, especially given the long-term negative wage impacts that have been found to follow young people who experience unemployment, but it does highlight the importance of polices to focuses on older aged workers as well as young people. This is especially true in cities that have low youth unemployment, such as Reading and Southampton (at 1.0 per cent and 1.3 per cent respectively), where limited resource are likely to have more impact on the local labour market if focused on those aged 25 and over.