The Government’s ‘City Deals’ mark one of the biggest shifts towards devolution of power to local areas that England has seen for decades. It’s a day to celebrate some hard-won freedoms and flexibilities – but there’s a long road to travel before cities can say they have real autonomy over their local economies.

The six remaining Core City Deals have been announced today: Birmingham, Bristol, Leeds, Newcastle, Nottingham and Sheffield. These join the Manchester and Liverpool Deals already announced (although Liverpool has today extended its deal to the wider city region). Areas devolved include: funding and finance, skills, infrastructure and business support.

As the Centre’s summary shows, each city has agreed a mix of different policies, all in exchange for commitments to deliver jobs, apprenticeships or even a ‘NEET-free’ city. 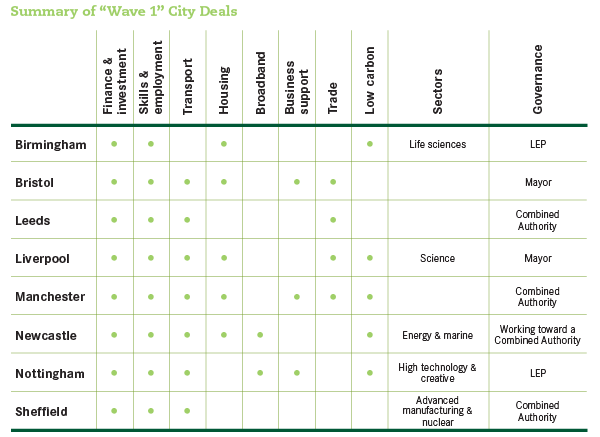 This kind of bespoke approach for the first round of devolution is welcome – the Centre for Cities has been calling for this for years as it enables cities to tailor policies to their particular needs, rather than having a ‘one-size-fits-all’ policy that doesn’t really fit anyone properly.

But it’s what happens next that will really determine whether cities continue to gain more autonomy from central government. In my mind there are four big questions.

First, will the cities deliver? Many in Whitehall are still looking for any excuse not to relinquish power and funding. The Core Cities are trailblazers; they will know all too well that with their additional powers comes additional responsibility. If they don’t keep to their promises, however big, the implications will be felt by all cities.

Second, who will be in the second wave of City Deals? Centre for Cities’ analysis suggests that it should include some of the fast-growing small cities (e.g. Cambridge, Milton Keynes), where policy intervention could make a big difference to growth and jobs, as well as some of the mid-sized cities (e.g. Sunderland, Coventry) that could really benefit from intervention. We talked about the benefits of a mid-sized cities £500m investment fund for city centres in our report published last week.

Third, will there be a ‘basic package’ of policies on offer to a wider group of local authorities? There are some core themes running through the Deals, like single Economic Development pots, that could easily be rolled out more widely, provided local authorities can demonstrate they can take tough decisions. This would be a big step for a reluctant-to-devolve Whitehall, but could make a big difference to local authorities strapped for cash and keen to make all existing money work harder for the local and national economy.

Fourth, will Whitehall deliver? And will the Government keep to its very welcome commitment that this is just a first step? The Government has been clear that it will keep talking to the Core Cities about developing their Deals and this is vital. It is only through keeping the dialogue going, keeping on demonstrating how cities can deliver better outcomes and / or greater efficiency, and keeping on encouraging Whitehall to let go of a little bit more, that we will give cities the autonomy that could make a big difference to local economies.

Today marks an important first step towards devolution and the Core Cities should be delighted with progress so far. But we will need to wait for a while yet before we know whether City Deals will really mark a turning point in relationships between central Government and England’s cities.