When Centre for Cities started publishing these updates back in April, it was clear different parts of the country entered the pandemic in very different positions. Much has changed over the past seven months and data released today by the Office for National Statistics provides a snapshot of the country on the eve of entering a second national lockdown.

This is what it shows:

1. Compared to last month, the claimant count mostly remained unchanged or even declined

Good news first – there were 43,000 fewer unemployment related claims for Universal Credit or Job Seekers Allowance in the country in October compared to September, with the claimant count rate declining slightly from 6.4 to 6.3.

This trend was mirrored in most cities and large towns. With the exception of Aberdeen, Crawley and Coventry, where the claimant count rate increased very slightly, in all other cities and large towns the number of people claiming unemployment related benefits stayed unchanged or declined. Worthing, Plymouth and Basildon were the three places where the claimant count decreased the most – a fall of 0.3 percentage points compared to last month.

Note: Data is not seasonally adjusted

2. The claimant count rate for young people stayed unchanged, but still is higher than for other ages groups

So far, young people appeared to be the ones hardest hit economically by the pandemic.

Encouragingly however, over the past month, the increase in unemployment related claims for this group has also appeared to slow down. Nationally, the claimant count figure for young people remained pretty much unchanged and only in 22 of our cities and large towns did the youth claimant count increase compared to September.

While these claimant count figures seem to suggest the labour market was improving before the second lockdown, it is important to treat them with caution and put them into wider context. Other official figures for September (so a month behind the latest claimant count figures) show that unemployment is rising and redundancies are at their highest level since the financial crisis.

One possible explanation for the lower claimant count rate could be related to who qualifies for these benefits. The changes to the Universal Credit system the Government introduced to protect people at the start of the pandemic means more people in work now qualify for these ‘unemployment-related’ benefits. While the ONS has stressed they currently have no way to quantify the number of people falling in this category, it might be that with the reopening of the economy and increased flexibility to the use of the furlough scheme, the number of hours worked by people in low-paid jobs increased meaning they no longer qualified for these benefits.

3. Each place is entering the second lockdown in a much weaker position than the first

Limitations of the claimant count data aside, what is clear when looking at these figures compared to March is that the situation is much worse now than what it was seven months ago, everywhere.

At the start of the first lockdown, there were approximately 1.2 million people claiming Universal Credit or Job Seekers Allowance. Now it is 2.6 million – and given the increase in the official figures for unemployment, it’s likely much of this increase is linked to unemployment too.  No part of the country has been left unaffected, but while in York and Exeter the claimant count figure now is 2 percentage points higher than in March, in Slough, Crawley and Luton it is five percentage points above their pre Covid-19 claims level – suggesting they are in a much weaker position to weather a second lockdown.

As a result, at the start of a new lockdown, these claimant count figures no longer paint a clear North/South divide picture. While many places with weaker economies continue to have high levels of unemployment related claims – such as Birmingham, Bradford and Hull – others, like Mansfield and Barnsley now have below average claimant count rates while some otherwise stronger economies are struggling – think of Slough and Crawley but also London and Manchester for example. 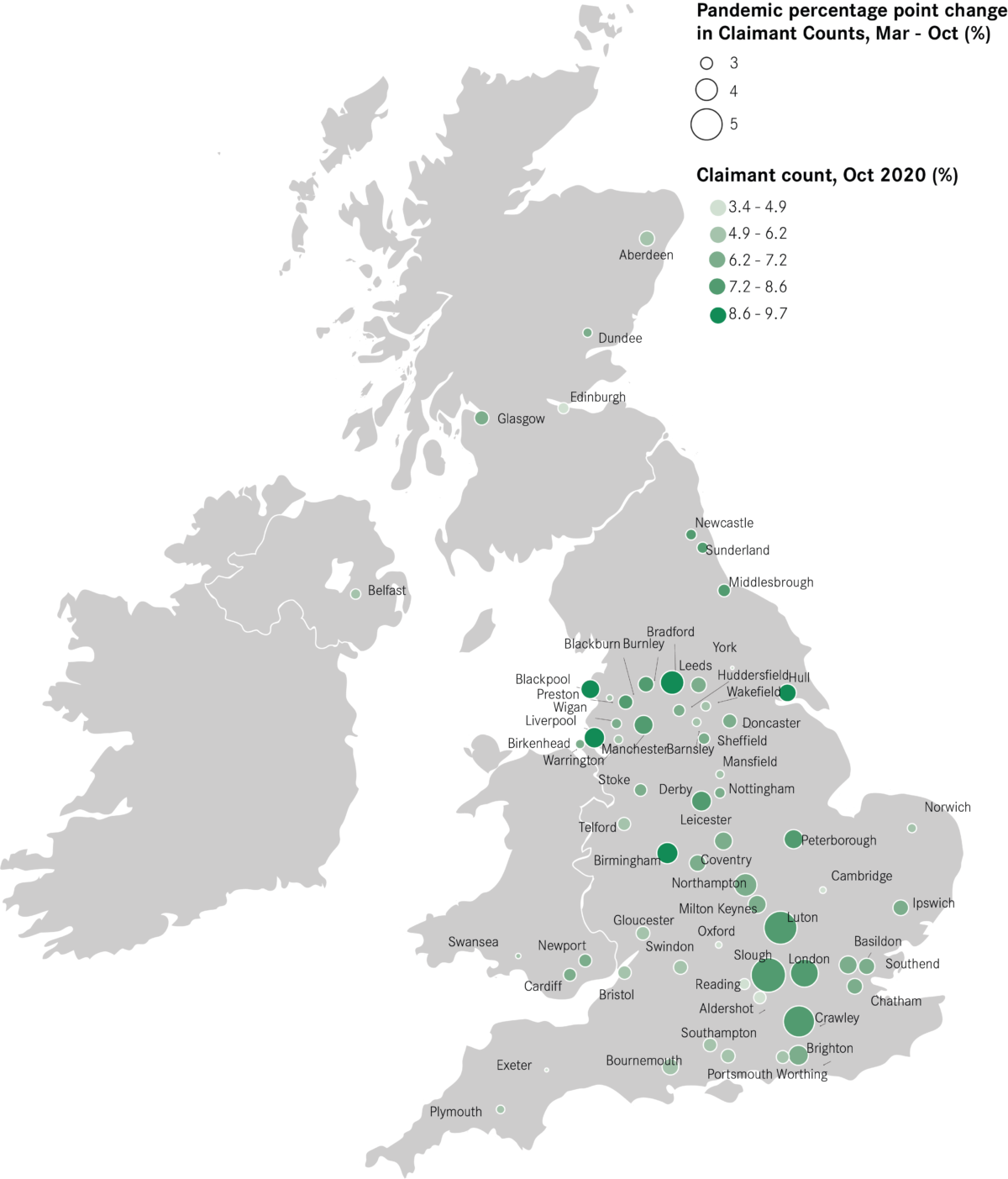 Given the second lockdown, the extension of the furlough scheme until March next year announced last week is a much-needed step to protect jobs during this second lockdown and in the months to come. The Government must now use the months it has bought through this extension to set out a clear and comprehensive plan for job creation to stimulate the economy as and when restrictions are lifted.