Yesterday’s labour market figures showed a continued improvement in the youth (16-24) labour market. At 16.2 per cent, unemployment among this age group continues to fall, but still remains above its pre-recession level of 13.8 per cent.

At a city level, the size of the youth unemployment problem varies vastly, from 6 per cent in Belfast to 0.5 per cent in Cambridge. Of particular concern is the length of time young people are unemployed for. Figure 1 shows how long-term youth claimant unemployment (those claiming JSA for one year or more) varies among the UK’s 64 largest cities. At 5.9 per cent of young claimants, Oxford has the lowest long-term unemployment, while Warrington has the highest, with over a quarter of unemployed young people looking for work for a year or more. 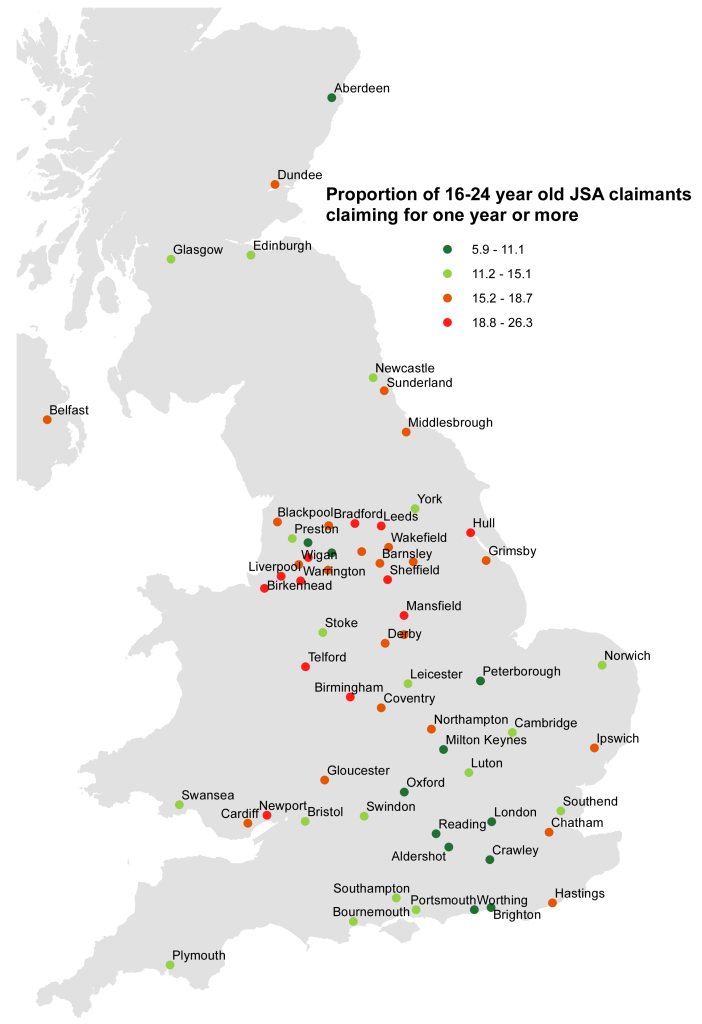 Geographically there is a North-South divide, but there are exceptions. Scottish cities are performing strongly as is Newcastle, while Southern cities including Chatham and Gloucester are among the poorer performing cities.

In general it is the cities with the highest youth claimant counts that have the higher proportion of long-term unemployed young people, reflecting the relatively weaker state of these cities labour market. This includes cities such as Hull, Birmingham and Newport. The notable exception to this is Warrington, with one of the lowest youth claimant counts (of 1.3 per cent) yet the highest proportion of claimants who are long-term unemployed.

The good news is that nearly all cities have seen a fall in long-term youth unemployment over the course of the year. The main exception is Blackpool, which has actually seen a rise of 6 percentage points (from 16.1 percent of young claimants in Oct 2013 to 22.1 per cent in Oct 2014). Yet on average cities have seen long-term youth unemployment fall by 3.6 percentage points, and with the continued strengthening of the labour market this trend can be expected to continue as job opportunities for young people increase.