Recent weeks have brought a number of reminders that while there is consensus on the importance of improving school performance in the North, the Government is still trying to get to grips with how to go about it.

Last Thursday, Ofsted published a new report warning of a growing North-South divide at secondary level. That same day, the Government confirmed the National Teaching Service, a scheme to recruit good teachers to deprived areas, has been dropped following a pilot in the North West which recruited just 54 teachers.

There are several reasons why improving school performance should be a top priority as part of any strategy to increase economic growth and productivity in the North. Good schools equip young people with the skills and qualifications they need to pursue further education and job opportunities – and ensure the future workforce has the skills that businesses require. They also make places more attractive to people looking for better schools for their children, and so help to attract and retain high-skilled workers.

Yet several cities in the North have among the lowest GCSE attainment rates in the country. The new Progress 8 measure – a ‘value added’ measure designed to capture the progress a pupil makes from the end of primary school to the end of secondary school – suggests that pupils in many cities in the North are making below-average progress, particularly in Maths and English (see chart). 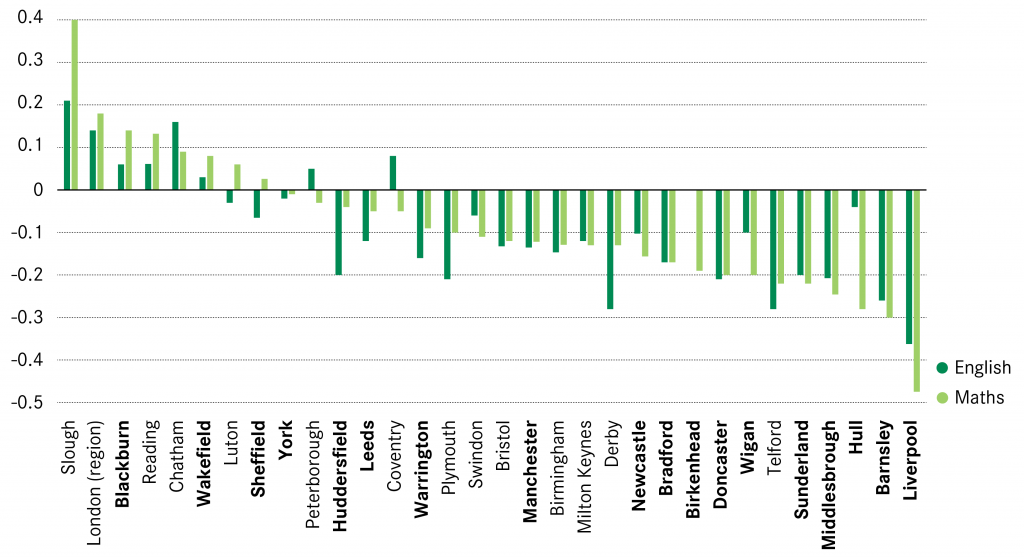 Source: DfE, 2016. Please note the chart only includes 32 cities as data is currently only available at LEA level. A score of above 0 indicates above average progress, while a score below 0 indicates below average progress compared with other pupils nationally with similar starting points.

The NPSS Weller review identifies a number of areas for improvement: from teacher quality and leadership to multi-academy trusts to early years. Evidence suggests that these are all issues requiring attention in efforts to improve educational outcomes in the North; the big gap in the evidence base is how to address them.

We know, for example, that teacher quality is one of the most important factors influencing educational outcomes. We also know that socially disadvantaged areas struggle to recruit and retain teachers – and that cities in the North have among the highest concentrations of deprivation in the country. It is no surprise therefore that this is Weller’s starting point in his list of recommendations, but the theme here is building better understanding. One strand of this is better measuring teacher supply and demand. He also recommends a pilot Department of Education (DfE) ‘Teach North’ scheme that will investigate what works in attracting and retaining high-quality teachers.

The Government have responded by committing to design, fund and test a range of approaches in this area. Whether this will include Weller’s ‘Teach North’ pilot is yet to be seen, but any approach should aim to build on the experience of the National Teaching Service and ‘Teach First’, which started in London but now operates in all the English regions.

Another big question is how to replicate London’s success in turning around its schools. The debate on the significance of the London Challenge programme is ongoing, and as a package of policies (rather than one standalone intervention) it is difficult to replicate. It was also well-funded, with a budget of £40 million per year at its peak – compared to £17.5 million per year allocated for the NPSS, covering an area with nearly twice the population.

The DfE’s current research on the ‘London effect’ will hopefully shed further light on the reasons behind London’s success. With the National Literacy and Numeracy strategies that were piloted in the capital’s primary schools potentially having played a bigger part than the London challenge in their turnaround, the North East Primary Literacy Campaign (a pilot launched by the Education Endowment Foundation) is a positive step forward and Weller calls for this to be expanded in his review.

Improving school performance is fundamental to the Government’s ambitions for the North – but for the £70 million earmarked for investment around the NPSS to have any significant impact, it needs to be spent in an evidence-based way. It’s therefore crucial that the Government builds on the educational pilots it has committed to as part of the NPSS, and ensures that their findings are at the heart of policies aimed at boosting educational attainment across the North in the coming years.