Much debate in recent years on the subject of economic growth across the country has centred round the idea that policy has focused on agglomeration and big cities, and that cities have grown at the expense of towns. But while it is frequently stated, it isn’t supported by the data.

Jobs data from successive Censuses shows that since 1971 it has been non urban areas in England and Wales that have been the biggest winners, with 70 per cent more jobs in 2019 than half a century earlier.  They are followed closely by cities and large towns (think Bristol, Reading and Crawley) in the South when London is excluded (see chart).

Figure 1: Big cities in the North and Midlands have lagged smaller neighbours 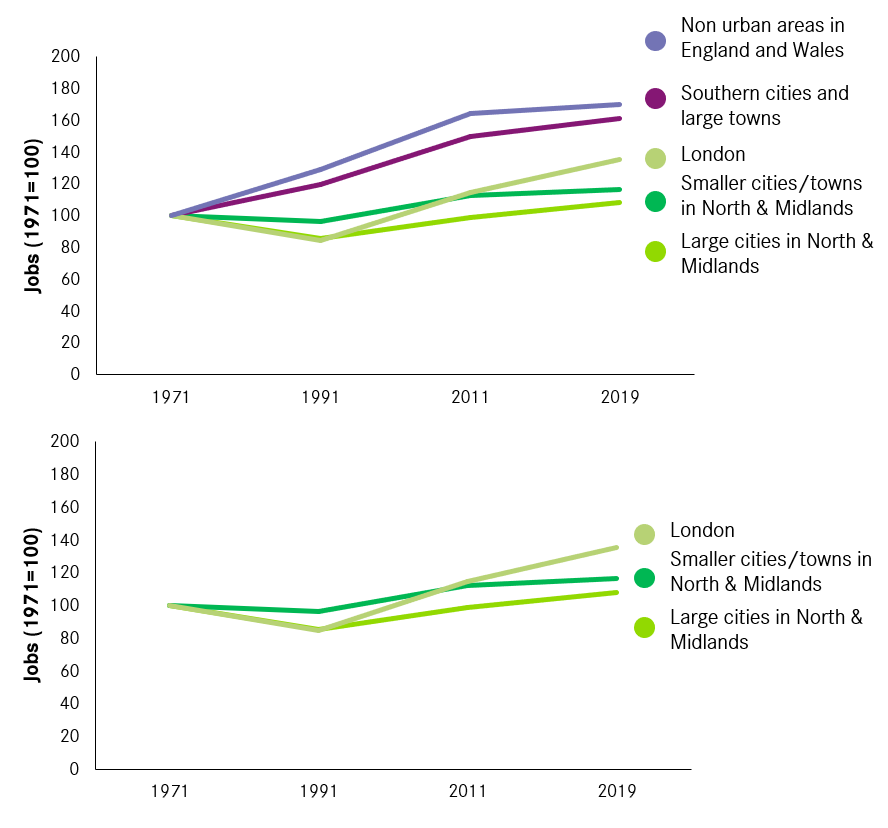 Note: 2019 jobs data is from the Business Register of Employment Survey

Larger towns and smaller cities in the North and Midlands (think Red Wall places such as Barnsley and Wigan), have trailed far behind. They had 16 per cent more jobs in 2019 and 1971.

But they’ve left big cities in the North and Midlands in their wake. These large cities had just 8 per cent more jobs than 1971. It’s only thanks to the growth seen since 2011 that they now have more jobs than they did almost seventy years earlier. The smaller places even outstripped London for part of the period, before the capital’s Lazarus-like bounceback since the 1980s.

Where big cities are likely to have performed better is in the creation of higher-paid jobs, such as in finance, law and software development. This is reflected in the large number of new graduates that many of these big cities attract in to work.

It is though unlikely that growth in this type of job has come at the expense of smaller places. These activities in particular tend to look for large pools of high-skilled workers and a large ‘knowledge’ network of similar businesses to interact with. Big cities inherently offer these benefits to a greater extent than smaller places. And forthcoming work by Centre for Cities will show that these jobs have always gravitated towards cities. It’s just that with the structural change in the national economy meaning it is now more focused on such activity, this has now become more obvious.

While policy decisions can help around the margins, they can neither drive these patterns or do the opposite and fight the tide, no matter what politicians claim. It’s not even clear that, despite the claims, policy has even attempted to help cities at the margins – there have been at least as many policy initiatives from government that have focussed on towns, ex-industrial communities and coastal areas as there have been on cities in recent decades.

Instead of worrying about cities eating the lunch of towns, policy makers should instead be concerned about the following headache: Despite global economic forces making knowledge work more important, and so making cities more important as a result, most big cities in the UK struggle. They’ve struggled in terms of job creation. And they’ve struggled in terms of productivity too.

So contrary to current popular opinion, big cities haven’t had it too good. And this should be a cause of great concern.