Meeting the UK’s ambitious target to reach net zero emissions by 2050 will require profound changes to many aspects of our daily lives. While electric cars and greener homes are widely discussed, an important factor is often missing from the public debate: how we plan our built environment will determine whether we reach net zero.

Spatial planning influences our daily lives more than we realise: from how we go shopping or commute to work to the type of building we live in. In densely built cities it is easier to leave the car behind: journeys tend to be shorter so they can easily be walked or cycled. Public transport also tends to be a better option for people due to higher demand. Denser housing, such as flats or terraces, is more energy-efficient and results in lower carbon emissions. This largely explains why urban residents have, on average, a smaller carbon footprint than people living in the rest of the country: about four tonnes of CO2 per person is emitted each year in cities, against more than six tonnes for people living elsewhere.

The same pattern applies between cities. A commonly-used comparison is Barcelona versus Atlanta: both have about 5 million inhabitants but Barcelona’s denser urban form results in a much lower carbon footprint per head. Here in the UK, Oxford and Telford have similar populations, but Telford’s built-up area is 61 per cent larger than Oxford’s, and its transport emissions per head are twice as high as a result. This relationship between density and transport emissions can be seen across UK cities (Figure 2). 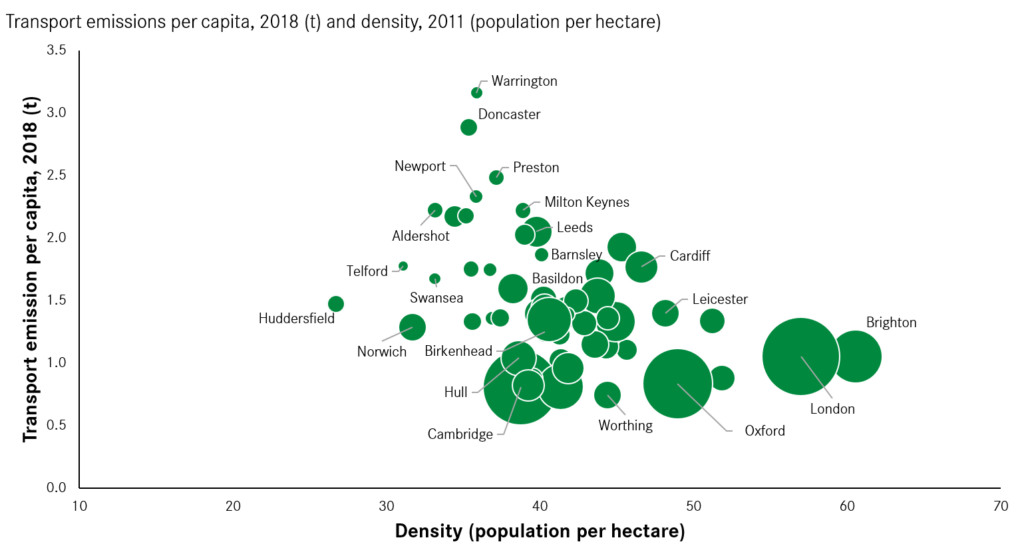 Source: BEIS, 2020. Census 2011. Centre for Cities’ own calculations. The bubble size here refers to the take up of public transport and active travel.

So far, the UK’s approach to development has gone against the net zero agenda

The problem is that UK cities are not very dense. Telford might not be as spread-out as Atlanta, but Oxford isn’t Barcelona either and a number of UK cities are far less dense than their European counterparts (Figure 3). In fact even London’s densest neighbourhood, Maida Vale, has just over 20,000 inhabitants, compared with more than 50,000 in Paris.

Figure 3: Population density in a selection of European cities

A lot of this has to do with the location, over many decades, of new residential developments in the UK. They have tended to be placed on isolated greenfield land on the outskirts of cities, away from jobs and public transport infrastructure and locking people into car-dependent lifestyles.

Some of this can of course be explained by the economics: land on the outskirts is usually cheaper for developers, and an out-of-town location is a better fit for businesses that need lots of space, such as warehousing.

However deliberate policy decisions have also shaped these patterns. The case-by-case nature of planning approvals makes it harder, riskier and more expensive for developers to infill existing built-up areas.

Development is easier and faces less local opposition on farmland on the fringes of cities.  Successive subsidies for out-of-town employment space such as business rates discounts in Enterprise Zones have also largely encouraged the displacement of public and private sector jobs which would otherwise have located in a city centre.

Planning reform is as important as direct interventions on behaviour change

This means that to reach net zero, we need to change the way cities are planned, built and managed by densifying them.

To do so, the Government should press ahead with planning reform. Not only would it accelerate the construction of new, energy-efficient homes; it would also make it easier to build denser housing such as flats or terraces on better connected brownfield land closer to city and town centres. A flexible zoning system where land located near railway stations is classified as “growth area” would allow the gentle densification of places with existing transport connections.

This would in turn make transport reform much more effective: It is much easier to get people out of the car if the bus stop is close and service regular. It is also more viable to provide a better service if more passengers use a particular bus stop or train station.

None of these changes will be politically easy, not least because the Government faces opposition from its own backbenchers and voters. But the scale of the cuts to emissions that we need to make to reach net zero leave no room for half-hearted measures.

The Government needs to press on with planning changes, and local governments – which have room for manoeuvre as local planning authorities – need to support this.

Now is the time to recognise that, alongside other policies, aligning spatial planning principles to environmental outcomes will take us significantly closer to the finish line.

This analysis originally appeared in EG magazine on 1 October 2021.

Our work on net zero

Our net zero work sets out what needs to change if urban areas are to lead the way in decarbonising the UK’s economy, without leaving people and places behind.