The GDP figures released today showing a contraction of the national economy of 0.2 percent in the final quarter of 2011 underline the fragile nature of the UK’s economic recovery.

As we stressed in Cities Outlook 2012, the impact of this contraction is likely to have been felt very differently across our cities. While some places may have seen an expansion of their economies in Q4 2011, others are likely to have seen a contraction much larger than the -0.2 percent seen at the national level.

Although we don’t have data for ‘city GDP’, looking at the performance of different sectors at a national level can give us some clues as to how the contraction of national GDP is likely to have impacted UK cities. Manufacturing and construction both saw contractions of 0.9 percent and 0.5 percent respectively, while services saw no change to the previous quarter. The implication of this is that those cities that have a higher number of jobs in manufacturing and construction, such as Barnsley and Blackburn, are likely to have been hit harder by the contraction at a national level than others.

We do have much more detailed data on unemployment, and this year’s Outlook focuses specifically on the unemployment challenge that cities face. This data shows that there is very strong divergence in city performance. And the worry for these places is that if unemployment continues to rise as expected throughout 2012 the gap between some of our strongest and weakest city economies will continue to widen. We’ve already seen the difference in the JSA claimant rates of Cambridge and Hull double since the start of the downturn in 2008. Continued public sector job cuts and the weak performance of the private sector mean that this gap could become ever larger. 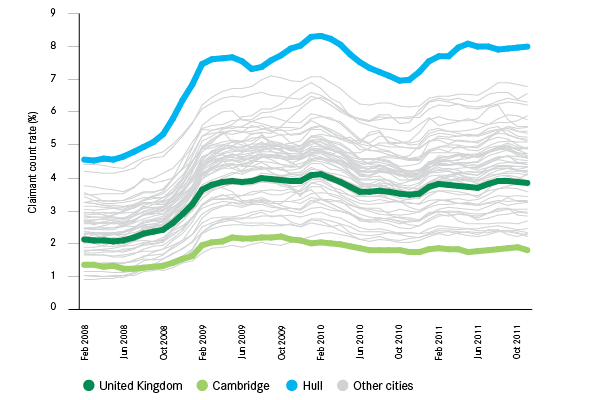 Cities will be key drivers of the recovery in the national economy. They are home to 58 percent of national employment and 62 percent of national output. As such it is vital that policy removes barriers to their growth, especially in the context of the latest disappointing national growth figures. City Deals offer a key opportunity to the Core Cities to do just that. The challenge now to Government is to expand this policy out to allow other cities more freedom to tackle their specific challenges too.