After decades of hankering, the geography of economic activity is getting attention from Westminster and the debate has now turned to the relative importance of cities and towns. Working on our recent report Talk of the Town, we uncovered three common misconceptions about the labour market relationships between cities and towns worth debunking.

1. Physical proximity to a city is bad for employment in towns

Towns closer to cities have better employment outcomes than towns further away from them, irrespective of the strength of the city. In towns close to relatively strong cities, unemployment sits at 8.9 per cent, while in those closer to the weaker cities, it is 11.7 per cent. This is still lower than the rural towns where unemployment is 12.1 per cent on average. It’s clear that in terms of employment, being close to a city, even if it is a weak city, is better than not being close to a city at all.

2. A close commuting relationship with a city stifles a town’s local economy

It is often assumed that towns with lots of commuters have weak local economies as residents do little more than live and sleep there and work and play elsewhere. However, evidence shows that the idea of a dormitory town that’s hollowed out by a commuting workforce is incredibly rare.

Therefore, a high level of commuting does not automatically give a town ‘dormitory’ status. Towns have a variety of relationships with cities near them and the idea of a dormitory town that’s hollowed out by a commuting workforce is incredibly rare.

3. Cities ‘steal’ talent away from the rest of the country

People move into cities when they’re young but don’t necessarily stay there.

Looking at the chart below, we see that there is a concentration of people moving into cities from non-urban areas in their late teens/ early twenties that tails off as age increases. In fact, net migration into cities is positive for 18 to 20 year olds and the opposite for every other age group.

This is largely reflective of the location of many universities. Young people move into cities in large numbers to access education, jobs, transport, and amenities like restaurants and shops. The trend shifts as people get older – more and more people move away from cities than into them, for larger living spaces, access to schools, lower pollution levels and availability of green space. 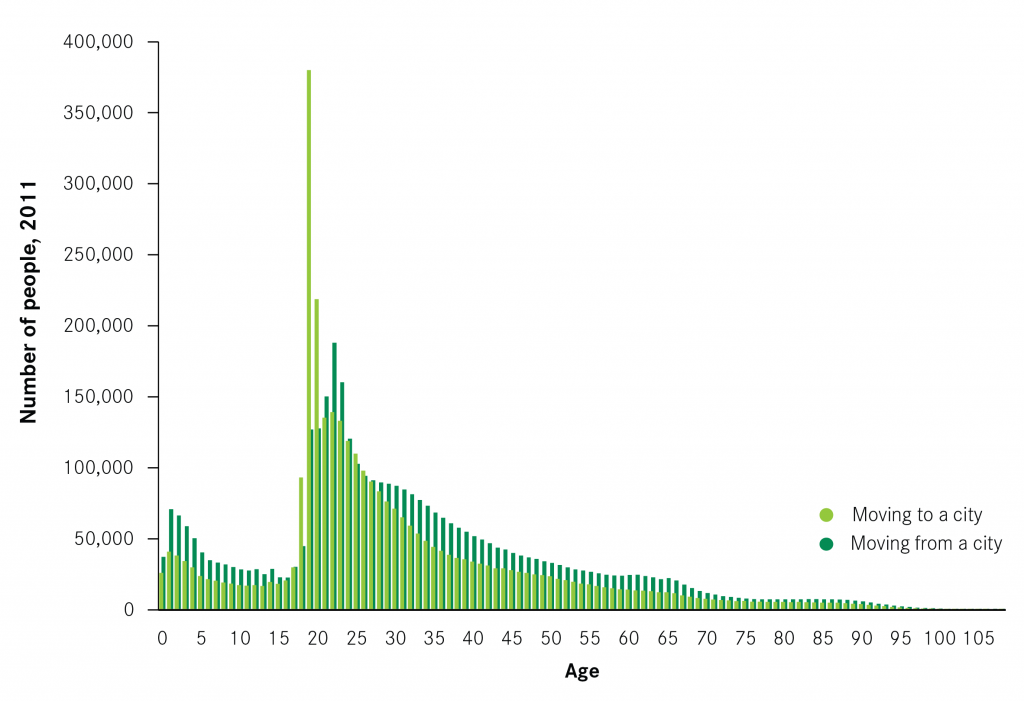 Migration by age in England and Wales

So, while it may initially look like cities attract young talent away from the rest of the country, the data shows that as people get older, they are likely to make the move in the other direction, usually with a higher level of skills and greater earning and spending power.

The relationship between cities and towns is often presented instead as a battle of cities versus towns, in which cities charge ahead economically as towns get left behind. In reality, the relationship between the two is much more symbiotic, as people continually move between them for study, for work and for play. This needs to be recognised when we discuss the policies that affect them.

Productivity Towns
Future of cities Levelling up Productivity
Does building on its manufacturing legacy offer the North a brighter future?