Labour’s announcement to move a key part of the Treasury to the North of England as part of their 2019 Manifesto comes as no surprise. It is not the first time that a political party has claimed they will “shift the political centre of gravity” away from London by moving parts of the machinery of government north – indeed the Conservatives made similar pledges in 2017.

But what impact would this have on city economies?

Since 1945, policy makers have frequently created public sector jobs in de-industrialising cities, which have been valuable for lessening the negative impact of economic change. Liverpool for instance would have lost many more jobs during the last century (it had around 40,000 fewer jobs overall in 2011 than 1911) if the Government had not stepped in and expanded the public sector in the city after the Second World War, as shown by previous work of the Centre for Cities.

While interventions such as this may provide short-term relief, they do not create genuine self-sustaining prosperity as explained by having a look at the geography of public sector employment across the UK. 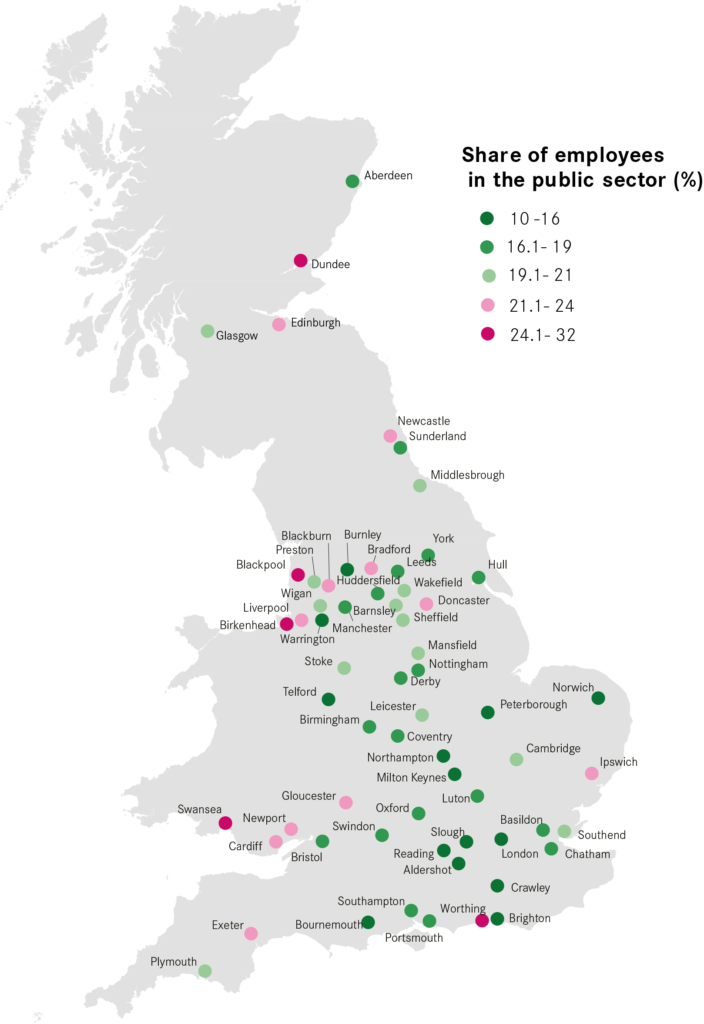 But how does this relate to the overall economic performance of a city?

The five cities with the highest share of public sector employment have lower productivity (measured by GVA per worker) and lower weekly workplace earnings than the comparator group. In contrast, the five cities with the lowest share of public sector employment have a higher share of jobs in productive industries (measured by jobs in high-skilled goods and service exporters) and almost three times more patent applications per 100,000 residents (Table 1). Together these indicate a stronger economy so, as a general principle, while the presence of public sector jobs is in itself neither good nor bad, the lower the proportion of public sector workers in a city, the more prosperous and productive its economy tends to be (as a result of the strength of its private sector).

Table 1: Comparison of key indicators across different groups of cities

There are some exceptions to this trend. The devolved administrations in Scotland and Wales probably explain why Edinburgh and Cardiff are, despite having relatively strong economies, among the cities with higher shares of public sector employment in the UK.

One reason why public sector jobs tend not to be a large catalyst for economic growth is because typically their multiplier effects on the wider local economy are comparatively small.

However, the multiplier for public sector jobs is just 0.25. So it would take four public sector jobs to create the demand for one further job in the local economy. These limited impacts can be seen when looking at the employment effects of the BBC’s relocation to Salford. While this led to direct job growth in Manchester’s Media City, the impact of the wider city region was rather limited.

As I have already stated, public sector jobs in a city are inherently neither a good nor bad thing and moving significant parts of the national administration to the North may have a positive impact on a more equal distribution of powers. However policy makers should keep in mind that the evidence suggests that increasing the public sector in a city to make up for deficiencies in the private sector is not a sustainable way to boost the economy.

To support long-term economic success, cities must focus on making themselves more attractive places for private sector businesses to set up and grow, and support residents and workers by helping them acquire new skills to take advantage of the jobs that are created. The problem these cities face is that they aren’t as attractive to high-skilled private sector activities as we would like. Putting more public sector jobs in them does little to address this issue.