One of the most controversial housing and planning reforms in recent years has been the introduction of office-to-residential conversions under permitted development. And the most critiqued feature of this reform has been the relaxation of national minimum space standards for these conversions. If you’ve read an article about “rabbit hutch” flats in recent years, it’s probably been about one of these office-to-residential conversions.

However, minimum space standards have their critics. Vera Kichanova in a recent paper for the Adam Smith Institute argued that “micro-housing” is the right choice for some people. And the urban economist Alain Bertaud compares them to calorie requirements – trying to use them to address a housing shortage is like trying to “solve a famine” by passing a law that everyone must eat 2,000 calories a day, instead of simply producing more food.

Our recent report, Making Room, highlights a problem with having a single national standard though – people consume very different amounts of space in different cities.

For example, while the average urban resident in England and Wales has 37 sqm of space, Figure 1 shows residents of Blackpool have on average 45 sqm and residents of Slough have 27 sqm. This is not necessarily a problem, as land is cheaper in Blackpool and residents of Slough can save money on their high housing costs by using their expensive space more efficiently. But it means a single national space standard has little impact in cities like Blackpool where space is plentiful, but in cities like Slough it forces homes to be built which are too large for residents to afford.

However, looking at space per person just shows how people currently consume housing. It shows neither the size of new and existing houses, or whether space standards are affecting supply.

Almost all new homes are larger than the minimum standard

Using data from the Energy Performance Certificate (EPC) register to look at almost 10 million homes in cities in England and Wales, it has for the first time become possible to see how large existing and new homes actually are.

4.6 per cent of new homes built since 2011 are smaller than the lowest minimum space standard (37 sqm). But this is almost identical to the existing stock – 4.5 per cent of homes built before 2011 are less than 37 sqm too. Similarly, Making Room showed that new homes are on average larger than existing homes, as though the average existing urban home in England and Wales is 84.8 sqm, the average new urban home is 87.1 sqm. This suggests that stories of “rabbit-hutch Britain, land of the ever-shrinking home” are somewhat exaggerated.

In contrast, while 4 per cent of new homes in London since 2011 are smaller than the minimum space standard of 37 sqm, so are 7 per cent of existing homes. Given how expensive homes are in London, this suggests that there is an unmet demand in the capital for new small flats of less than 37 sqm in which, for example single people could live by themselves without having share with housemates.

Space standards also mean many new houses are too big

Looking at the share of houses under 37 sqm only shows how many houses are smaller than the lowest minimum space standard. In practice, there are many different standards depending on the intended occupants, including a 50 sqm space standard for one-bed properties for two people.

The impact of space standards on new supply can be shown more clearly by plotting how much space new and old houses have on a graph (a histogram). Using a similar idea to a recent paper from Nolan Grey and Salim Furth of the Mercatus Institute, the graph in Figure 3 shows how large new (since 2011) and existing houses are across all cities in England and Wales.

Figure 3: Space in new and existing dwellings in English and Welsh cities, 2011-19 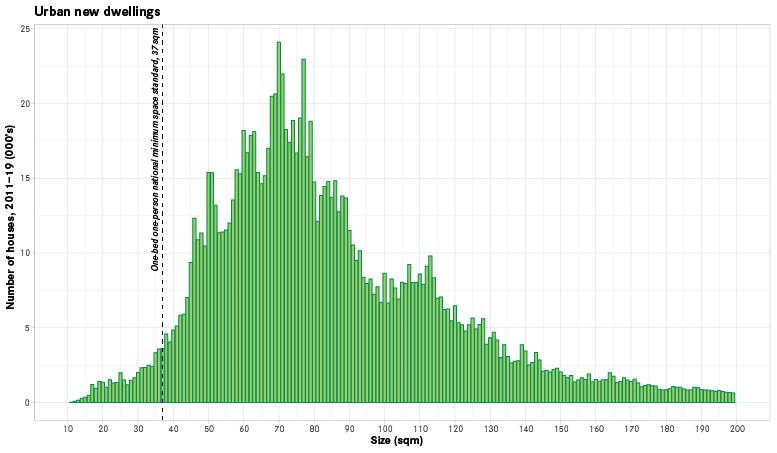 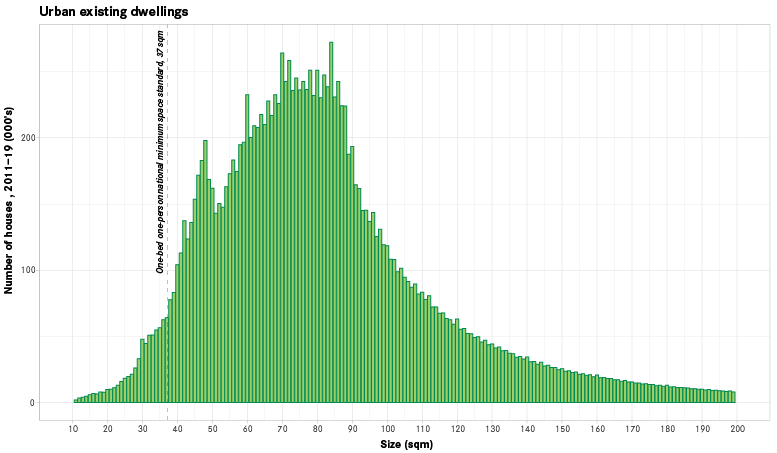 Source: Domestic Energy Performance Certificate Register, 2019. Dwellings below 10 sqm and above 200 sqm have been dropped for data quality reasons, and account for 0.3 per cent and 1.8 per cent of all housing stock in cities respectively.

Theoretically, these graphs should show a completely smooth curve, with very few tiny and huge houses, and the size of most houses somewhere around the middle. We almost see that in the distribution of existing homes, aside from a particular concentration of houses at around 47 sqm.

But with the supply of new housing, we see a much less smooth pattern. Instead, there is bunching at particular points. This bunching implies that not enough smaller homes are being built, if we accept the theory above that people’s demand for space is “smooth”. For instance, somebody wanting to rent a new 40 sqm property would have to be much luckier or search much longer and harder than if they accepted a far more common new 50 sqm property in their city, which would either cost them more or require them to share with a housemate.

There appears to be bunching in the supply of new homes across cities at around 50, 70, and 85 sqm. These each match the space standards at 50 sqm for one-bedroom flats for two people, 70 sqm for both two-bedroom houses for three people and two-bedroom flats for four people, and 85 sqm for three-bedroom houses for four people. Although the link with space standards cannot be proven, if they were changing developer behaviour then you would expect to see bunching at these points.

This bunching can be seen even more clearly if we focus again on London in Figure 4. Rather than a single curve, there is a twin peaks effect, with the supply of new homes concentrated at the 50 and the 70 sqm mark, which align with the space standards described above. There is much less supply of new homes between these two points than we might expect in theory and compared to London’s existing housing stock. 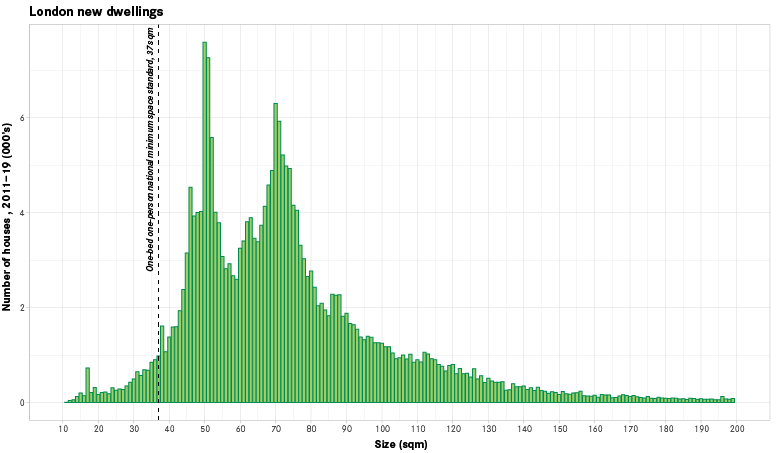 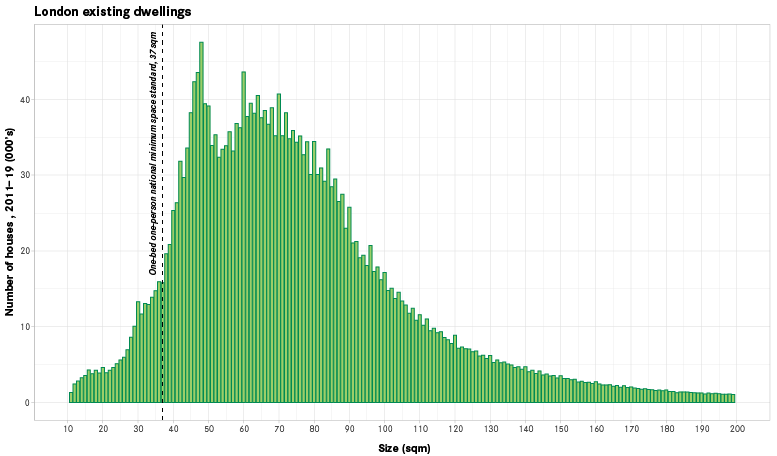 Source: Domestic Energy Performance Certificate Register, 2019. Dwellings below 10 sqm and above 200 sqm have been dropped for data quality reasons, and account for 0.3 per cent and 1.8 per cent of all housing stock in cities respectively.

This means there is a particular undersupply of small flats in London below this 50 sqm standard, which would be particularly suitable for single adults to live on their own and be self-reliant. Instead, such adults are forced to live like students and share with housemates well into their thirties in crumbling old Edwardian houses, while still consuming a small amount of space per person due to London’s high land values.

Space standards make the housing crisis worse and should be abolished

Not only do space standards force people to share, they also reduce the supply of dwellings by reducing the total number of units. Imagine a new apartment building which has 5,000 sqm of residential space which is under a strict minimum space standard of 50 sqm per flat, or 100 one-bed flats. If, to do some simple arithmetic, that 5,000 sqm could be provided as 30 sqm flats (without changing the space needed for utilities or access), the same building could provide over 166 new, more affordable homes for people.

Some might respond to this saying it is wrong for people to live in small houses. But is it? Philosophically, what right do others have to insist that people should buy more housing than they actually want? Houses smaller than the current minimum space standards are the right choice for some people, and they should be allowed to live how they want, even in 8-9 sqm houses.

Other people live in houses which are currently too small for them and their families. But they already know this, and forcing new homes to be larger than they can afford does not solve the problem these families face. The right approach to improve housing conditions for these families is through redistribution and the welfare state to boost their purchasing power, such as through increasing housing benefit as Shelter have called for.

If anything, building more small homes is part of how policy can help make larger family homes more affordable. If it is common for many single adults to be forced to share large houses with each other, they will easily be outbid two-earner adult households when renting. If more small homes can be built for singles and couples, this will reduce the pressure on larger homes and free them up for families.

Contrary to the popular view, the problem isn’t that new houses in Britain are too small – it’s that many are far too big. Space standards should be abolished or at least substantially relaxed, not just to help solve the housing crisis, but to allow people to choose to live independently and with dignity.