This week the Regional Australia Institute (RAI) has published two new reports analysing the recent performance of Australia’s regional cities, and outlining a plan for future growth based on the City Deals model currently in use in the UK. As the CEO of the RAI, Jack Archer, pointed out, big and small cities face different challenges and have different needs:

This is true on both sides of the globe, for countries with a federal system and for those that are highly centralised, like the UK.

Focusing on policies that are tailored to the different needs of different cities to drive growth in more places can lead to high returns. While extensive data is more readily available for larger cities, it is equally important to understand the performance of small and mid-sized ones. It can also be helpful to compare the performance of cities internationally. So what does the data on economic growth and industrial structure show for those smaller cities within Australia, compared with the UK?

1. Proximity to large cities is good for smaller ones, but not sufficient for growth

Although using two different time frames and slightly different metrics makes it hard to compare cities from the two countries, it is clear that mid-sized cities both in Australia and in the UK benefit from connections with expanding large cities. But is it enough to drive medium city growth?

Mid-sized cities close to London perform better than other cities. Between 2009 and 2013, cities like Oxford, Reading, Crawley and Chatham all had an average GVA growth rate above 15 per cent and it is plausible to believe their success is at least partly related to their proximity to the capital. GVA growth rates were positive everywhere in the country, with the exception of Luton (-1.36 per cent). The national average was just above 11 per cent, but cities outside of the South East tended to see slower growth rates. 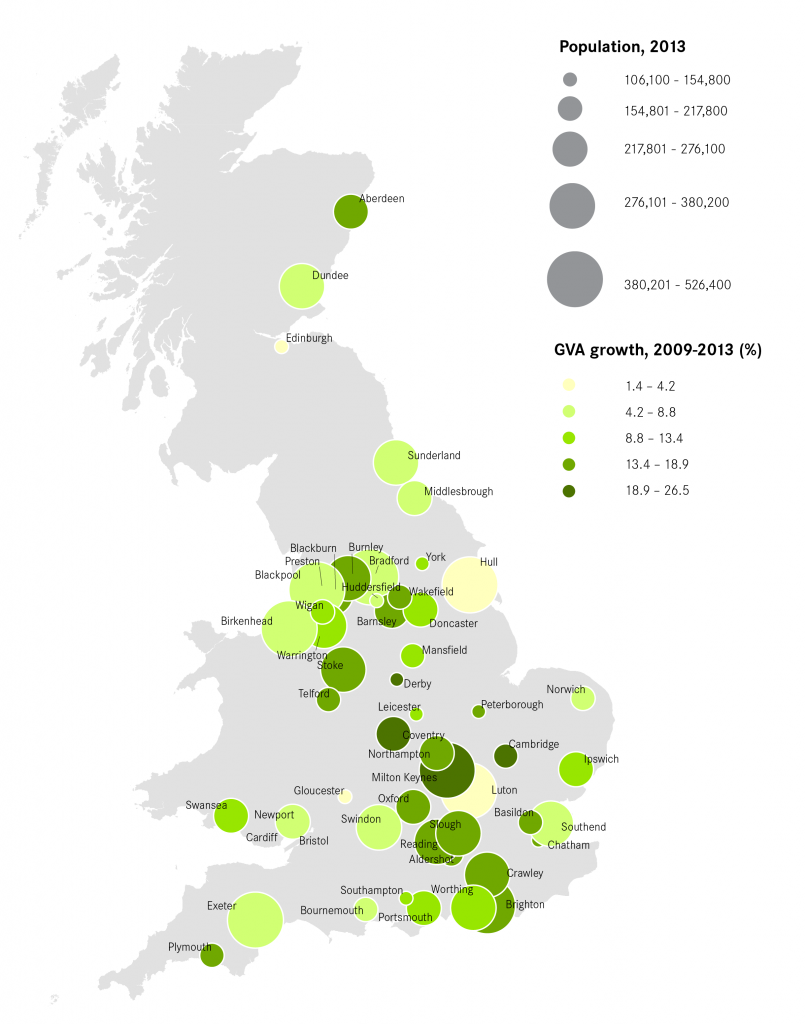 Contrarily, Australian mid-sized cities are spread across the nation, and while many of the bigger cities in this group (e.g Gold Coast, Newcastle and Geelong) are located close to capital cities, they did not all experience strong economic growth. The cities with the highest growth rate in Australia are those experiencing a mining investment or ‘sea-change’ boom.

Despite being pictured as lagging behind metropolitan cities, the 31 Australian regional cities actually perform as well as the larger cities. Looking at Gross Value Added (GVA) growth rates between 2001 and 2013, only one city (Latrobe) had negative growth, and most cities experienced growth in line with the national average of approximately 40 per cent from 2001-2013. But the real growth winners were cities in Northern Australia including Gladstone (110 per cent) and Mackay (95 per cent), which have seen high growth rates driven by the mining investment boom, and the cities close to high performing metropolitan cities like Perth and Brisbane. 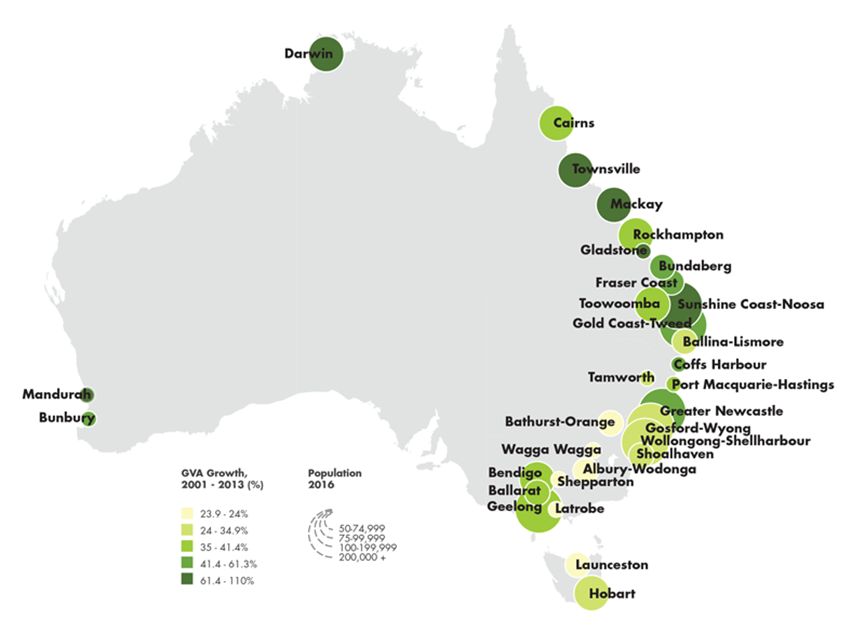 Cities on both sides of the globe have seen a growth in services, and a decline in manufacturing

A common trend among Australian and UK mid-sized cities is the shift towards new economy industries (finance, education, health and professional services). Growth in services has been consistent across urban Australia, accompanied by a decline in importance of manufacturing. This is similar to the UK experience, particularly for cities in South East England, where the percentage of private knowledge intensive business services in 2013 was, in most cases, above 15 per cent.

Although all cities are shifting towards new industries, each city is still unique in its nature. As these findings show, specialisation and proximity to big successful metropolitan cities have an impact on the success of mid-sized city economies.

And these are only two examples: many other factors such as demographic make-up, size and industrial composition will also affect cities’ economic growth.

All these differences underline the importance of having a city-based approach at the heart of domestic economic policy. City and growth deals have given local authorities in England the powers and flexibility to address their unique needs. Following a similar approach could offer Australia the chance to unlock further economic opportunities and balance growth across the country.

To find out more about how Australia could learn from the UK experiences see the report: ‘Blueprint for Investing in City Deals: Are you Ready to Deal?’ or you can contact Dr Leonie Pearson, Great Small Cities Program Leader – Regional Australia Institute.