We now know Labour’s mayoral candidates for Manchester (Andy Burnham), Liverpool (Steve Rotheram) and West Midlands (Sion Simon). Over the next year, they and potential competing candidates, like Jeremy Middleton (running as an independent in the North East) and Andy Street (rumoured to be considering running in the West Midlands) will have the task of not just selling their vision to the electorate, but promoting the role of mayor itself. To engage the public, the candidates must show what the mayor can do with their new powers to improve their lives.

We polled residents in six of the largest cities outside of London that will be electing their first metro mayors in May. There is clear support in each city for handing their directly elected mayor more powers than local councillors. But after holding events in the same cities, it was clear that questions remained around how to secure a strong yet accountable executive. The 2017 cohort of metro mayors will be expected to deliver significant change with a portfolio of powers, but with limited budgets and substantial challenges. So will the mayors have the powers to make these tough decisions and improve the way their cities work? 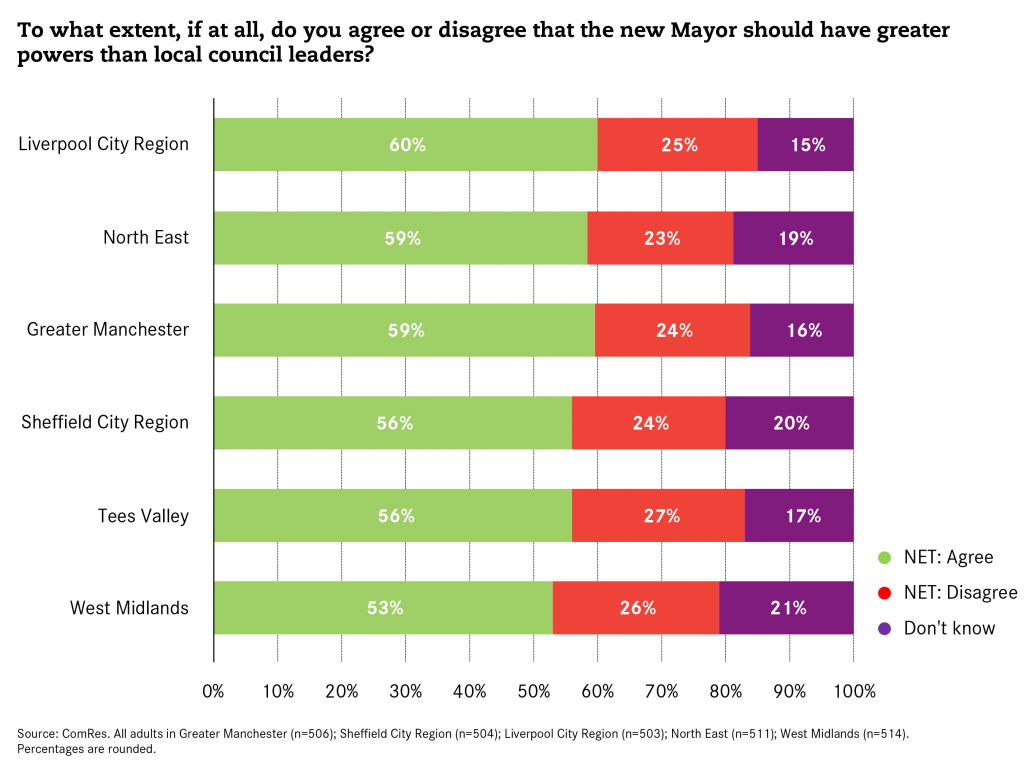 The new metro mayors’ strategy and budget decisions will be made after consulting with the combined authority cabinet – made up of the constituent authority leaders in their city region. The cabinet will review the metro mayors’ spending plans, and can amend or reject policies if in a two thirds majority – a model that ensures that councillors will retain influence over strategic decisions.

The Mayor will choose their cabinet from council leaders – councillors elected to lead their local council by their colleagues. This ensures that the elected councillors have influence over city-wide decisions and strategic investments. Councillors are however accountable to a much smaller local electorate within the city region, and face being ‘punished’ for ratifying decisions that benefit the city as a whole, but might go against the interest of their electorate. They also might not always have the best experience or skill set to fit their city region cabinet position.

These limitations afford the new metro mayors less ‘executive power’ than the London Mayoral model. While Sadiq Khan must work closely with the 32 boroughs across the Capital to enact decisions and investments, he is ultimately held to account by the London Assembly. The London Mayor can also hire his own senior team, blending skill sets and experiences to suit the responsibilities of different directorates. In contrast, the metro mayor model in the other city regions restricts the important personnel decisions that help mayors achieve their vision. Being accountable to the combined authority will also affect the decisions the new mayors can make.

However, lessons from the first four terms of mayoral government in London show that the Mayor’s power and influence is not limited by their formal powers, and can grow over time. Some of the biggest decisions and policy changes that London Mayors have been associated with since 2000 did not actually fall within the formal powers handed down to them. For example, Ken Livingston championed the capital’s bid to host the Olympics and introducing the Congestion Charge, while Boris Johnson secured support for Crossrail 2. None of these initiatives were within their formal remit – they used their profile and a constructive relationship with central government to make things happen.

And in addition, over the last 16 years, the GLA and Mayor of London have used these successes, the profile of the office, and the size of their democratic mandate to secure many new powers – over housing, planning, skills and more.

To meet their ambitious visions for their city, the new mayors will need to go beyond their formal powers. This will require them to make the most of the complex web of local and national governance networks to deliver for their city. In time, their successes will help make the case for more powers to be devolved. But from the start, the new directly elected mayors will need to start forging key relationships and taking the tough decisions to get things done.

Want to know more about the new mayors in 2017? Check out our Metro Mayor FAQ