As part of the Government’s reorganisation of the welfare system, Universal Credit (UC) continues to be rolled out across the country, replacing a number of means tested benefits, including Jobseekers Allowance (JSA). As more Jobcentre offices offer UC, and more people make the switch, the change effectively means that the JSA figures, often used as a proxy for unemployment, increasingly underestimate unemployment.

In recognition of this ONS have changed how they report the National Claimant Count figures, combining JSA with out of work UC claimant figures to give an ‘experimental’ estimate of the number claiming unemployment benefits in the UK.  Yet because this measure includes all out of work claimants, regardless of whether or not they are actually unemployed (some will not looking for work, such as stay at home parents and full-time students, officially referred to as the “inactive”) it actually overestimates claimant unemployment.

What does this mean for city analysis?

Reflecting these limitations the figures presented on our data tool continue to report JSA claimants only. Due to the change in the definition used by ONS this means they are no longer equivalent to Claimant Count data, but are officially referred to as JSA claimant count figures.

Figure 1: JSA vs JSA plus out of work UC claimants 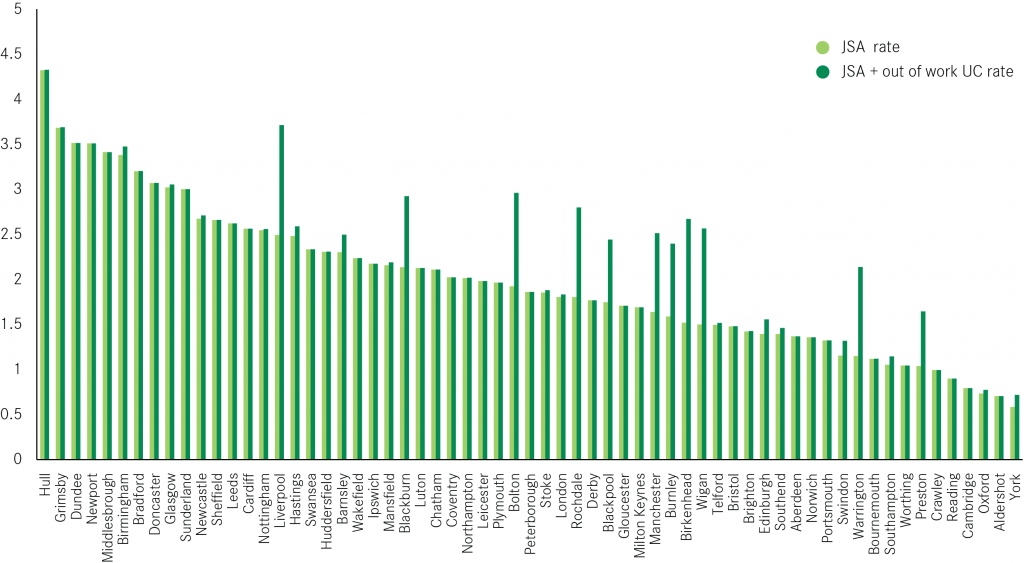 The gap between the two measures has widened over time as more and more people have moved onto UC (Figure 2). It is impossible to say how much of this difference is due to out-of-work UC capturing unemployment no longer picked up in the JSA figures, and how much is down to the inclusion of the inactive group in the UC figures – a group never included in the JSA figures and ideally excluded from any measure of the Claimant Count. What can be said is that in cities where a large number of people are claiming UC, our data is likely to overestimate the recent fall in unemployment.

Figure 2: Liverpool JSA and JSA plus out of work UC rate 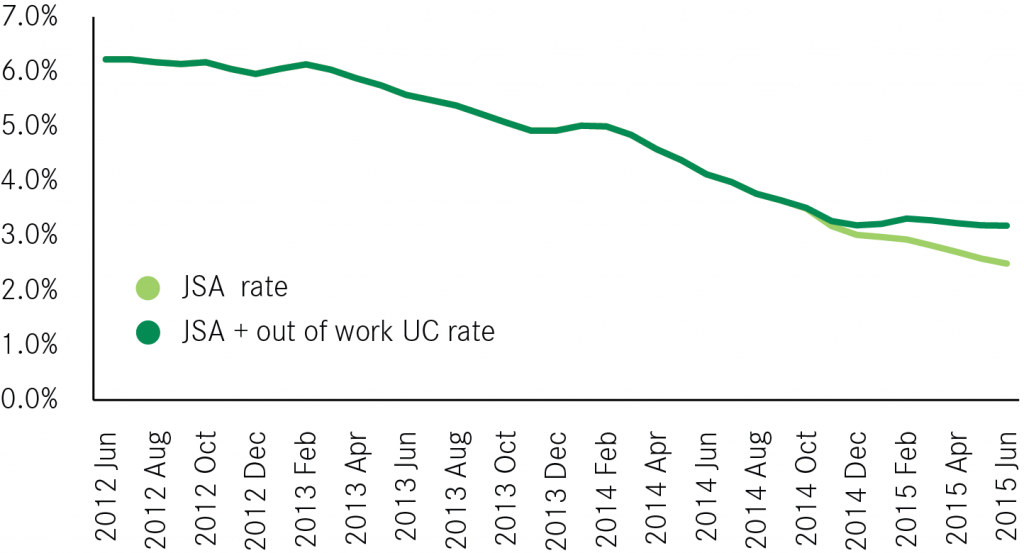 Will the city data be updated to account for UC claimants?

ONS have noted that they are working with DWP to produce national statistics that separate out unemployed and inactive UC claimants in order to give a more accurate estimate of claimant unemployment. It is expected that this process will be completed by the end of this year for at least the national level statistics, followed by an updating of local level datasets. As more detailed UC data becomes available and as UC is introduced in more cities, (it is currently estimated that roll out won’t be complete until late 2017) we will review which measure gives the most useful estimation of city unemployment and update our figures accordingly.