The manifestos from Greater Manchester metro mayor candidates are out, and while there is consensus on many of the key priorities for the city region, each of the candidates offer different policies on how to address them.

Skills and schools are both key to the city region’s long-term economic performance, and they inevitably form important parts of the various manifestos. All three candidates from the leading parties have offered proposals on how to get more young people into work in the area and how best to use the apprenticeship levy. Going beyond their formal suite of powers included in Greater Manchester’s devolution deal, both Andy Burnham and Sean Anstee have targeted improving schools across the city region as a key campaign pledge. This is welcome – as our briefing on the key lessons the new metro mayors can take from London’s mayors shows, making the most of ‘soft powers’ and acting as an ambassador for their city region will be crucial in ensuring the new mayors can have the biggest possible impact. 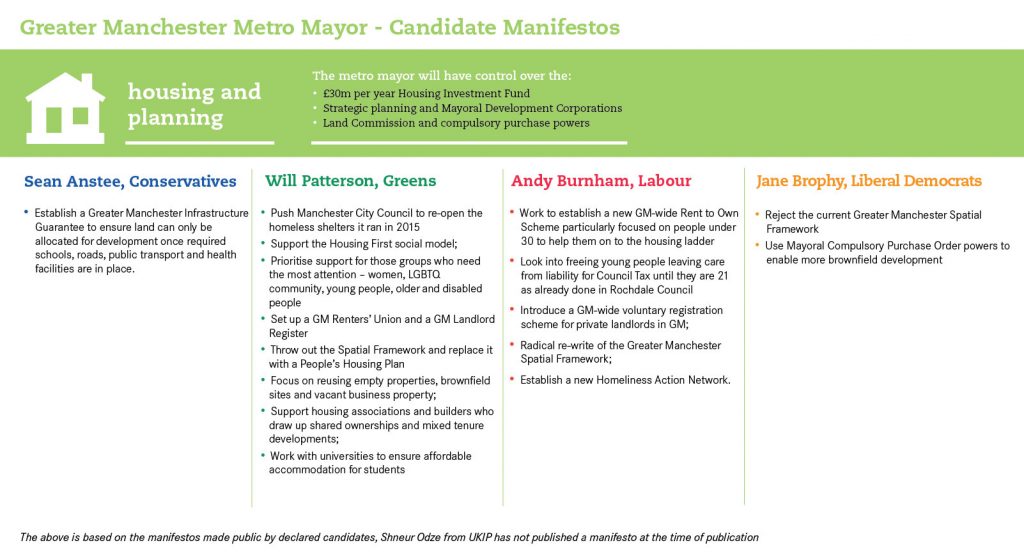 Some of the most significant powers the new metro mayor will have are over strategic planning and housing, and so it’s no surprise that a key issue for all the candidates is whether or not to back the Greater Manchester Spatial Framework agreed by the combined authority. Centre for Cities has highlighted that implementing the spatial plan could help ensure that housing and offices get built where they are needed most, and Conservative candidate Sean Anstee has backed the plan, calling it vital for the future success of the city region. In contrast, both Andy Burnham (Labour) and Jane Brophy (Liberal Democrats) have pledged to reject the framework, largely because it includes plans for the release of green belt land, which has inspired some opposition in Greater Manchester. 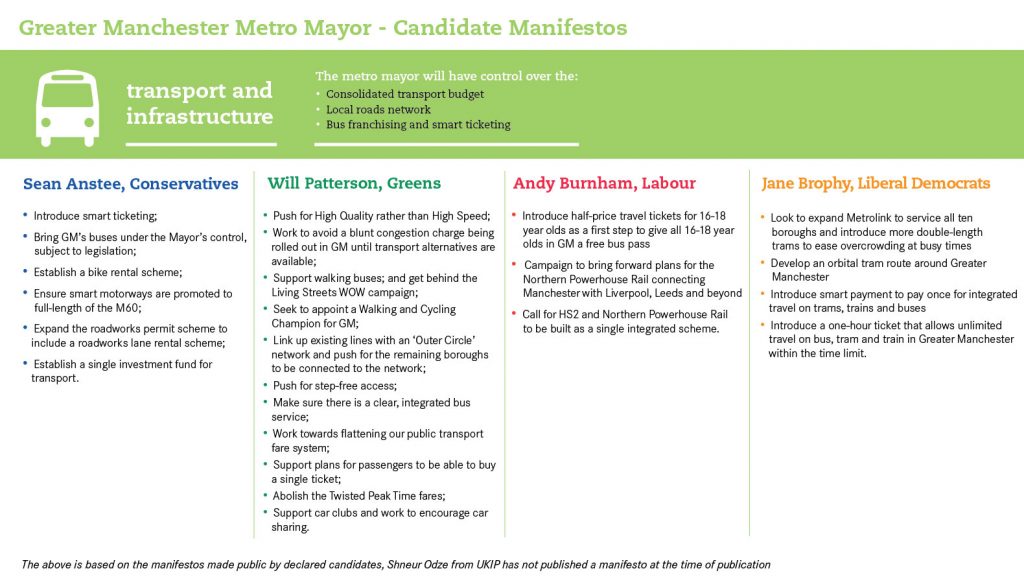 In terms of transport policies, all three major candidates have proposed specific ticketing changes made possible through the Bus Services bill. Beyond this, Jane Brophy has so far offered the most concrete plans for transport investments, in her proposal to expand the Metrolink service to service all ten local authorities in the city regions. None of the candidates taken up our call for a congestion charge in Manchester city centre, which could have helped to tackled tackle congestion and fund more extensive public transport in other parts of the city region.

A longer term priority for both Burnham and Brophy is to use the metro mayor’s new health powers to integrate health and social care services in the city region – which as our analysis shows, should provide a more ‘joined-up’ service for patients and could provide savings. However, given forecasted spiraling costs it is notable neither candidate backs this with calls for increasing council taxes.

The new metro mayor for Greater Manchester will have a unique suite of powers compared to other places electing a mayor, and a considerable profile and mandate to drive change. All the candidates have made bold pledges in the lead up to the election – but to ensure they deliver, each will need a clear strategy and effective working relationships with the constituent local authorities and central government colleagues.