The announcement earlier this year by Manchester city council to grant approval to St Michael’s development, a 30 storey tall building in the heart of the city, has sparked controversy across the city. Those in favour of the project emphasize the positive economic impact of the building, which will include flats, grade A offices, retail space and a hotel, in an area of the city that the council has long been keen to regenerate. Those against it are particularly concerned about the location and aesthetics of the new tower block, especially due to its proximity to historic Victorian buildings.

This story reflects wider concerns about the redevelopment of the city centre, for example about the lack of affordable homes, heritage buildings at risk of being lost, and distinctive areas such as the Northern Quarter losing their spirit.

It’s true that Manchester city centre is undergoing massive economic and social changes. As our recent City Space Race report shows, between 1998 and 2015 the number of jobs located in the city centre increased by 84 per cent, and the number of residents grew by a whopping 149 per cent between 2002 and 2015.

But notwithstanding the concerns of people who aren’t comfortable with the transformation of the city centre, these changes show how much Manchester city centre has improved as a place to live and a place to work. In terms of employment and businesses, it has been particularly attractive to knowledge-intensive activities, which accounted for half of the new jobs created in the city centre between 1998 and 2015 and represented 44 per cent of all city centre jobs in 2015. This economic success, in turn, has made the city centre a more attractive place to live, with young professionals accounting for a large part of the overall increase in city centre population.

To date, the city centre has been able to accommodate both types of growth because of the amount of land available. But the recent controversies suggest that land availability may now be becoming a restriction. And this poses an interesting challenge for the city’s planners, who need to strike the right balance between commercial and residential use.

Just as Manchester’s urban renaissance has been fuelled by the growth of knowledge-intensive jobs in its city centre, so much of its future success is likely to hang on the continued ability for the city centre to support their growth in the future. This will mean that the ongoing availability of appropriate commercial space will be very important.

Yet national planning policies tend to favour the development of residential space over commercial, as shown in our report City Space Race. Permitted development rights (PDR) are a good example of this. Under this policy, converting office blocks into residential units does not require a planning permission, meaning that local authorities have less power to balance building uses.

Manchester has obtained an exemption on PDR over parts of its city centre, which has helped to protect its office stock. But as shown on the map below, many conversions under PDR have happened – or are currently underway – at the fringes of the protected area, bringing a total of 718 new residential units, which suggests that competition for space is building up. 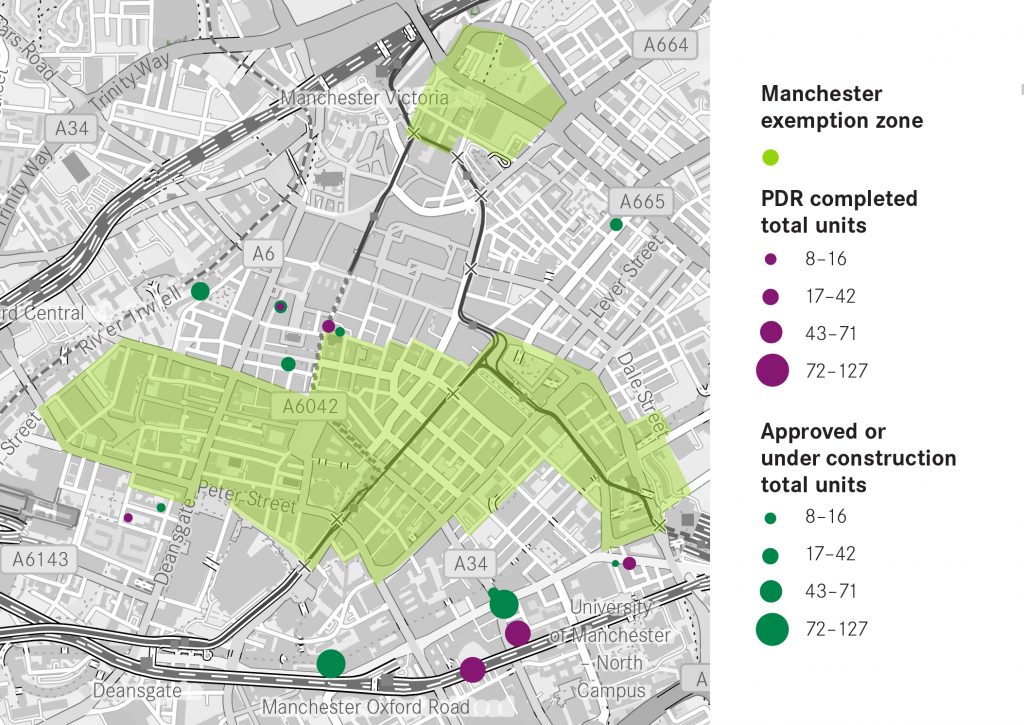 This policy is likely to result in an ad hoc approach to city centre development. The task for planners will be to balance and manage the competing needs of employment space, residential space, heritage and cultural amenities, which PDR makes more difficult.

The city centre cannot absorb all the growing demand; given the importance to the city’s economy of supporting businesses to thrive in the city centre, planners will need to make adequate space available for residential property in other areas of the city.

So while land pressure is not currently as acute in Manchester city centre as it can be elsewhere in the country, current economic changes suggest that this is likely to soon become a significant issue. This will require action today to allow the city centre to continue to play a central role in the city’s growing economy tomorrow.

Want a snapshot of all our latest research and analysis? Subscribe here to receive our newsletter every fortnight.

High Streets Housing
Housing Levelling up
Targeting land banking is only tackling a symptom, not providing a cure