A much trailed announcement in yesterday’s Budget was the Chancellor’s commitment of up to £60 million to develop plans for rail improvements between Leeds and Manchester and upgrades to the M62.

Our work Fast Track to Growth shows why these upgrades are important, particularly for rail. Between them, the central areas of Manchester and Leeds are home to over a quarter of a million jobs. And an upgrade is long overdue. The rail link between the two cities is one of the slowest between all big cities. And as the graphic below shows, as well as being more frequent, trains between Milton Keynes and London go at twice the speed of those between Manchester and Leeds. 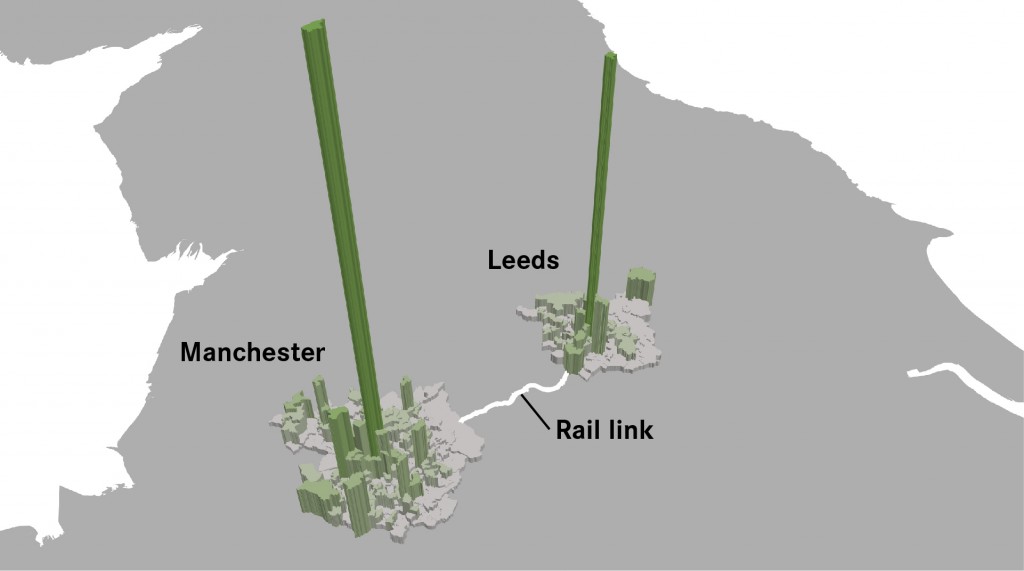 There is, however, a note of caution to be sounded here. While this upgrade is welcome, it’s unlikely to have a major impact on the performance of the two cities – and therefore the North more generally – on its own. And there is a risk that the political benefits that come from announcing big infrastructure projects distract from other challenges that must be addressed in northern cities if they are to improve their contribution to the national economy.

Improving transport links within cities is one such challenge. A key driver of business investment decisions is whether they will be able to recruit the workers that they need. One of the big draws of London is that the capital’s extensive transport network gives central London businesses access to 3.75 million graduates within 64km of Holborn Station.

The HS3 route will do little to make commutes easier within these cities, or expand the pool of people that businesses can hire from. Instead, this will require Transport for Greater Manchester and an equivalent body in the Leeds City Region to be given similar powers and responsibilities to Transport for London.

TfL’s control over a number of transport modes allows it to coordinate between them and use smart ticketing. And its control of fares gives it an income stream that it can borrow against, and longer term funding settlements allow it to invest in improving the capital’s transport network. While giving Manchester and Leeds similar powers may not grab similar headlines, it would likely to be as least as important as HS3 for the future performance of their economies.

We’ll be doing more work on links within and between cities in the North in the coming months.