One thing we hear a lot at Centre for Cities is that London is so big that it shouldn’t be compared to other cities in the UK. But it’s performance over the last century, and the way it has adapted to change, offers valuable lessons for all of our other cities.

Although difficult to believe now when wandering by the banks of the Thames or the narrow streets of the City, London hasn’t always been successful. Between 1951 and 1991, the capital lost around 820,000 jobs. That’s the equivalent of all the jobs in Leeds and Newcastle today added together. Increasing competition from abroad and the rise of containerisation swept large swathes of the capital’s factories away, and almost every one of the numerous cranes that once jostled for a position on the Thames waterfront has gone. London has around 1.2 million fewer manufacturing jobs than it did in 1951, while it has lost almost all of its docking jobs.

London’s bounceback has been remarkable, and has been based on its ability to reinvent its economy. Between 1991 and 2013, the capital saw its total number of jobs swell by around 1.7 million (a 45 per cent increase). Around a third of these jobs were created in private sector knowledge-intensive business services jobs, and as the chart below shows, this more recent growth has more than offset the post war declines. 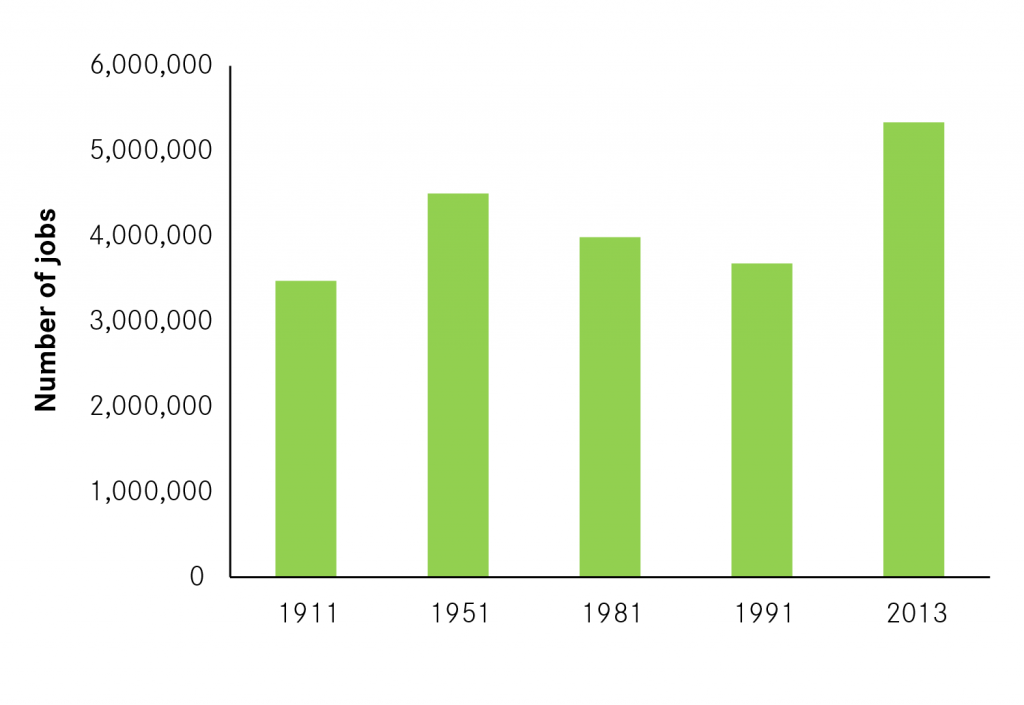 This reinvention has reaped large dividends for the capital. It is by far the most productive city in the country, and is home to the highest paying jobs. And where once the waterfront cranes and docks such as East India and Greenland represented London’s position as a gateway to the world, it is now its towers of steel and glass that show how London is a global city based on its advantages in the knowledge economy.

From the vantage point of 2015 the attempt by the Greater London Council in the mid-1980s to bring back docking to Canary Wharf looks absurd. And almost no-one bemoans the decline of manufacturing in the capital, despite having around 780,000 fewer jobs in the sector than a century ago. This is mainly because of its success in creating hundreds of thousands of high paid jobs.

And yet, despite the lessons that London teaches us, when we talk about economic development policy for other cities in the country we talk of the ‘march of the makers’, or the creation of ‘superports’. Instead of encouraging the reinvention of their economies, helping them to adapt to the challenges of the 21st century, policy instead attempts to encourage the replication of the economies of other cities in the UK. These discussions are the equivalent of the GLC’s lobbying to bring docking back to Canary Wharf, only 30 years further down the line.

London appears to be so dominant now because of the way it has replaced jobs in declining industries with jobs in new, knowledge-based sectors as they have emerged. Instead of discounting London, other cities need to learn from its experience. If not then the capital’s dominance within the national economy will continue to grow.

Previous blog in the series: What is the future for manufacturing in UK cities?