So what can we learn by looking at self-employment in London?

The capital also has a high number of self-employed people in other industries, such as hotels and restaurants, distribution and other personal services like hairdressers and beauticians, but, compared to other cities, London’s self-employed are less likely to work in these industries. 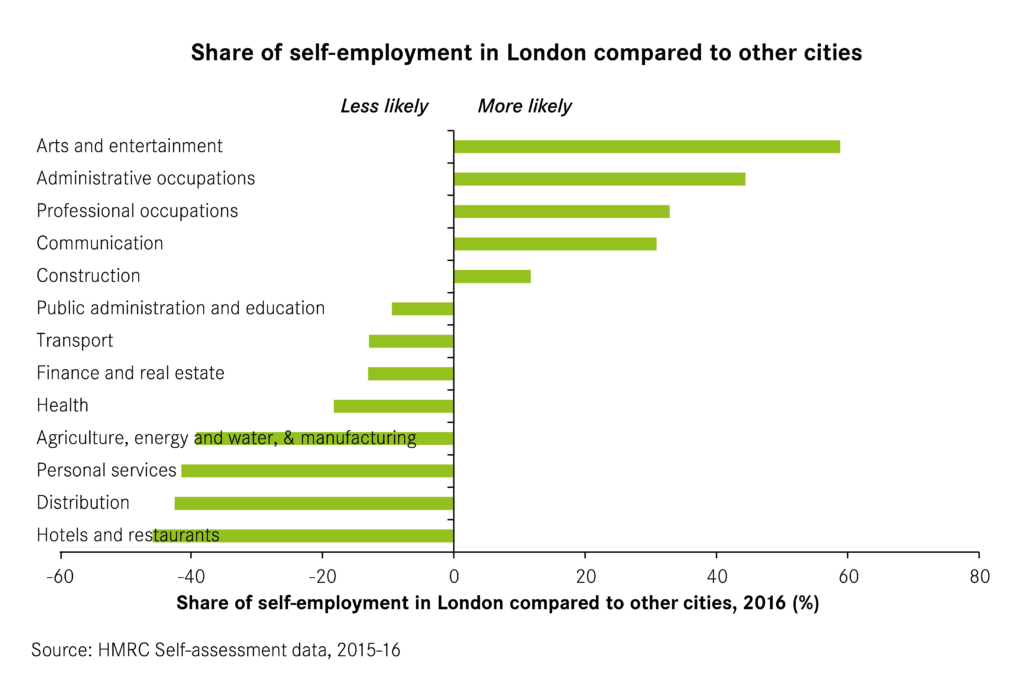 Share of self-employment in London compared to other cities

This underlines a key finding from the report – that the reasons that make London a good place for firms and workers to be based also apply to self-employed people.

London is one of the favourite locations for high-skilled exporting businesses – businesses that create jobs such as consultants and other professional services occupations. Given that they trade with regional, national and international markets, these businesses could virtually locate anywhere, but choose places like London because of the access to knowledge and high-skilled workers the city offers. And like other businesses, self-employed people in such occupations benefit substantially from what London offers to them too, explaining why self-employment in high-skilled exporting sectors is so popular in the capital.

In addition to that, London offers a large and relatively wealthy consumer base that generates strong demand in local services occupations. London’s high numbers of self-employed people in the transport industry, arts and entertainment, and personal services has much to do with that.

The two things together make London an ideal place to do business, and a perfect environment for the self-employed too. As with many other things, having strong foundations to the economy – whether it’s a skilled workforce, infrastructure or access to knowledge – is instrumental for attracting businesses and creating job opportunities. Self-employment is no different, so the best way for cities to support those who decided to ‘go solo’ is to focus on strengthening such foundations.