As this year’s Cities Outlook shows, the rise of the robots and other trends set to change the world of work are nothing new. Looking at the composition of the urban workforce in 1911, it’s clear that many of the jobs that existed then have since been swept away by automation and globalisation. But the types of jobs that were affected varied across different cities, and this holds lessons for the forthcoming local industrial strategies.

The maps below give an illustration of the share of jobs that existed in 1911 which have since been displaced by automation and globalisation. To gauge the impact of automation, we focused on fine-grained Census data for a number of occupations which have been clearly affected by automation, such as domestic servants and laundry workers. For globalisation, we used jobs in mining and manufacturing as a proxy to examine the impact this trend has had in cities. 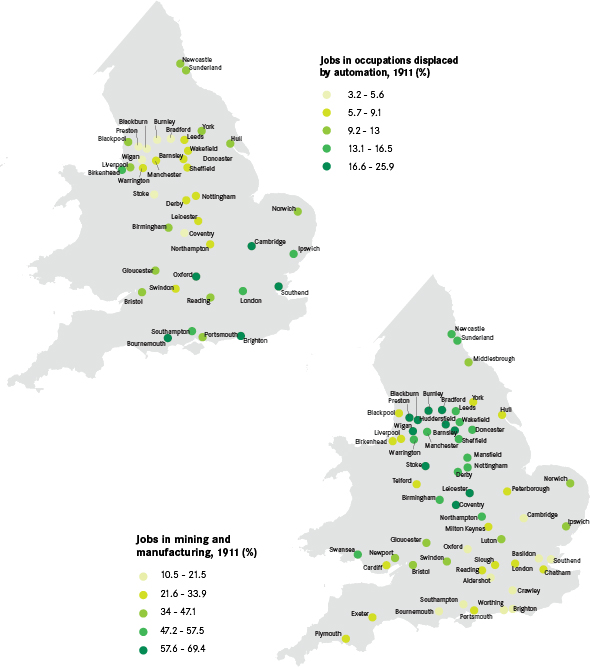 There are two things to note from these maps. The first is that cities in the South have been more greatly affected by automation – at least one in five jobs in Bournemouth or Brighton in 1911, for example, was at risk of being replaced by a machine (compared to less than 5 per cent of jobs in Burnley, Blackburn or Preston). Meanwhile, the threat of globalisation was bigger for Northern cities – for example, 60 per cent of jobs in Barnsley were in mining or manufacturing in 1911.

The second is that a larger share of jobs at risk in southern cities tended to be in local services – those jobs that serve a local market, such as domestic servants and stablemen (for horse drawn coaches) – while at-risk jobs in cities further north tended to be in more export-focused activities (including exports to regional or national and international markets).

Why does this distinction matter? As we showed in our report Trading Places, the performance of exporting businesses is crucial to the performance of a city economy overall. That’s because these activities tend to be the drivers of productivity growth in city economies. This puts money into people’s pockets – a good thing in its own right –which in turn increases demand for local services such as shops and restaurants. In other words, the loss of export jobs has bigger implications for the economy than the loss of local services.

Crucially, when we look at jobs in cities today which are vulnerable to the coming changes in the world of work, it seems that the different patterns in Northern and Southern cities are set to repeat  themselves. For example, 45 per cent of all jobs currently at risk in Huddersfield are in export occupations such as process operatives and assemblers, while it’s 43 per cent in Wakefield. This contrasts to Brighton and Crawley, where less than 20 per cent of jobs at risk are in export occupations.

The main issue for many Northern cities is that the exporting jobs they have seen grow in recent decades have tended to be lower skilled – for example, in call centres and traditional manufacturing – and are therefore more exposed to being displaced. Unless this changes in the future, these cities will continue to struggle

If the forthcoming local industrial strategies are to help improve the economic performance of our weaker city economies, they have to deal with the barriers that have deterred investment from higher-skilled exporting businesses in recent decades. This means addressing issues such as skills and planning, rather than focusing on specific sectors.

If this doesn’t happen, we are still likely see jobs growth in these cities in the coming decades. But they will continue to have lower productivity and lower wages than cities elsewhere. And they’ll also be more vulnerable to the next waves of change in the world of work.