With the General Election now less than 100 days away, each of the main political parties are busy finalising their manifestos, and drawing key dividing lines between their policies and those of their rivals. The Prime Minister, Deputy Prime Minister and leader of the Opposition have already taken to the airwaves and television studios extensively in 2015, and it is clear that the future of the economy and the state of the public finances will be at the heart of the campaign between now and May.

What does this mean for the growing debate surrounding devolving power to UK cities? Now that the starting gun has fired on the Election contest, many believe the focus on cities will diminish as the parties seek to respond to the concerns of voters, while also moving to set out their national priorities for the coming Parliament.

But such a view ignores three main factors that will characterise how the 2015 Election will be contested, and which also mean that cities are likely to remain at the top of the political agenda through the campaign and beyond.

First, this will be an election where the big debates on the economy and the public finances will continue to be dominated by spatial arguments.

While it is true that when framed in terms of an abstract constitutional issue, devolution, cities policy and local government structures are unlikely to be raised on the doorstep between now and polling day, there is no doubt that concern over where growth in the economy is really happening, which places are facing the biggest cuts to their budgets, and whether the current distribution of pain and gain is unfair, or simply inevitable, will define the Election campaign.

The importance of these questions to the overarching narrative promoted by each of the mainstream parties is already clear to see. For the Conservative Party, that means persuading people that the economic recovery since 2010 has been driven by places and people all over the country – particularly outside of their traditional bastions in the South; while for Labour, it means making the case that the Coalition has overseen and engineered a recovery for the few, not the many.

This argument is so fundamental to the way in which the major parties are framing the 2015 Election that it will only intensify as we approach polling day. And it is likely to resonate particularly within urban constituencies – particularly those within fast growing cities like Brighton and London, where high house prices and congestion are most likely to be felt; as well as those cities like Sunderland, Liverpool and Hull, which are home to the highest incidents of poverty, benefit dependency and unemployment.

As the map below shows, two-thirds of the top 50 target seats they have identified are located in urban areas across the country. Cast the net a little wider, and of the 194 seats with the lowest majorities heading in to polling day, three-fifths are in urban areas, and virtually all are within the ‘travel-to-work’ areas of the UK’s 64 largest cities. 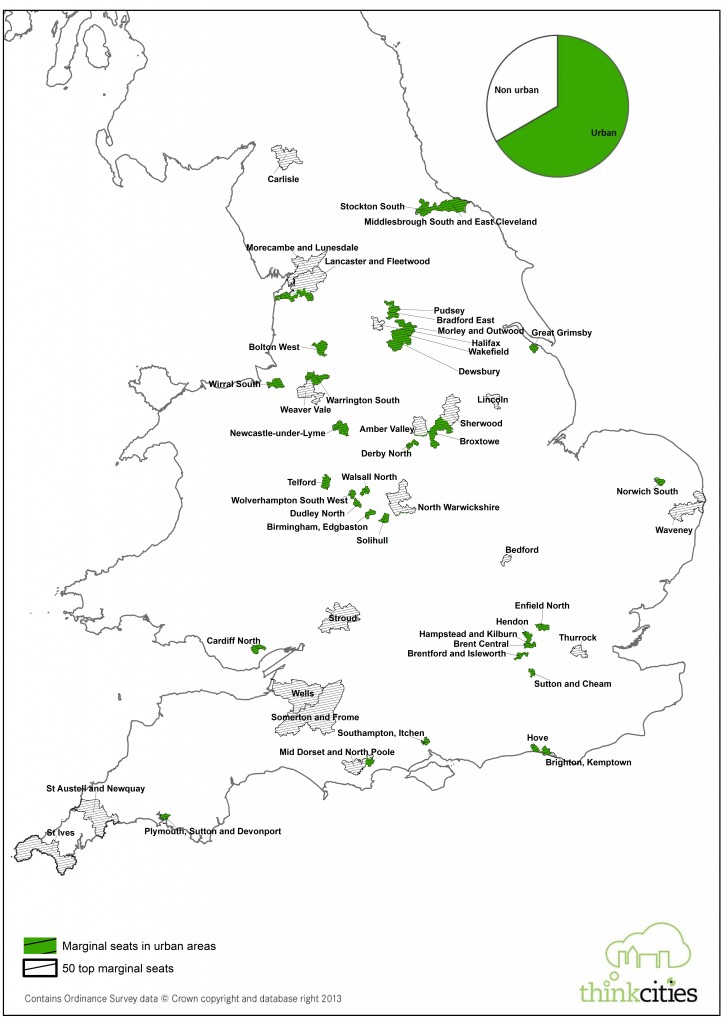 While voters within these urban marginals won’t necessarily flock to the party offering the most comprehensive devolution package, it does mean that politicians hoping to win a majority in 2015 must respond to the pressures facing residents of places like Bolton West, Dudley North and Norwich South. And that means having compelling policies on jobs, wages, skills, housing and infrastructure – which exclusive polling we conducted with ComRes in 2014 revealed are also policy areas that many constituents believe should be delivered locally.

Third, all of the parties know that they need to resist making major new spending commitments during the campaign, so as to bolster their credibility when it comes to managing the public finances.

This means that politicians need to find alternative ways of signalling their intention to boost growth across the country, and in particular, to win support within key marginal seats. Promising more powers for local government to support job creation and higher wages is attractive as it allows each of the mainstream parties to campaign on the economy and take a populist position towards putting more control in the hands of local communities, without a need to deliver on expensive new programmes and projects should they form the next Government.

Of course, there remains a risk that should the Election campaign become overtly negative, the parties will judge that there is simply not sufficient difference between their offers on urban policy to make it worthwhile to promote their own plans, or attack those of their rivals. But that does not mean cities won’t remain at the top of the agenda throughout 2015 and beyond.

Given the economic and financial landscape, where the need to create jobs and boost tax revenues is so overwhelming, but where the ability of Government to increase spending to support such activity is so limited, improving the performance of urban economies across the country, and empowering local government to do more with less on public service delivery, will be vital to whoever triumphs in May.

For more details on what the parties need to offer cities ahead of the election, read our Manifesto for a more prosperous urban Britain.