On 19th July, the Government lifted all Covid-19 restrictions and social distancing guidelines; work-from-home advice was also removed; and 18 months after their doors closed nightclubs were finally allowed to reopen. Did these measures have immediate impacts on employment? The latest update of Centre for Cities’ UK Unemployment Tracker, with data from claimant count and Indeed’s job postings, shows us how much places recovered – two months ahead of the termination of the Coronavirus Job Retention Scheme.

As of July 2021, around 2.3 million people were claiming either Job Seekers Allowance or the work-component of Universal Credit. This is the lowest number of claimants since the start of the pandemic. However, there are approximately one million more claimants than before lockdown (March 2020).

The total number of claimants fell by 17,000 in July, just one tenth of the 177,000 fall in the previous month and the smallest drop since March 2021. Moreover, July’s changes were almost entirely driven by claimants aged between 16-24 years-old, which suggests that the reopening of the night-time activity benefits this age group in particular.

The findings above show that the 10 per cent employers’ contribution to the furlough scheme, which started in July, did not cause an increase in claimant count.

In contrast, job postings data from Indeed shows a more positive picture – postings kept rising in almost every city in July. There are only six cities with job posting below pre-covid levels, down from thirteen when compared with the previous month.

Cities and large towns in the North and Midlands continued to have the strongest recovery in job postings: Barnsley and Middlesbrough have 68.1 per cent and 62.4 per more postings than in February 2020, respectively. Aberdeen and aviation-reliant towns (Crawley and Slough) continue to lag in terms of job postings (See Figure 2).

Putting these two measures together shows gives a good snapshot of how the recovery across cities and large towns is taking hold as we approach the end of the furlough scheme in September. Cities in the bottom right of the chart below are in a good position – places like Swansea and Norwich have relatively low claimant count rates and high numbers of vacancies.

The bottom left is populated by many cities in the South, such as Aldershot and Reading. The recovery in vacancies is weaker than elsewhere, but so are the share of claimants.

Many cities in the top right are in the North and Midlands, like Birmingham, Newcastle and Liverpool. The number of job vacancies has risen substantially when compared to their respective pre-covid levels, but this has not been enough to bring the claimant count below the national average.

Figure 3: The relationship between claimant count and job postings 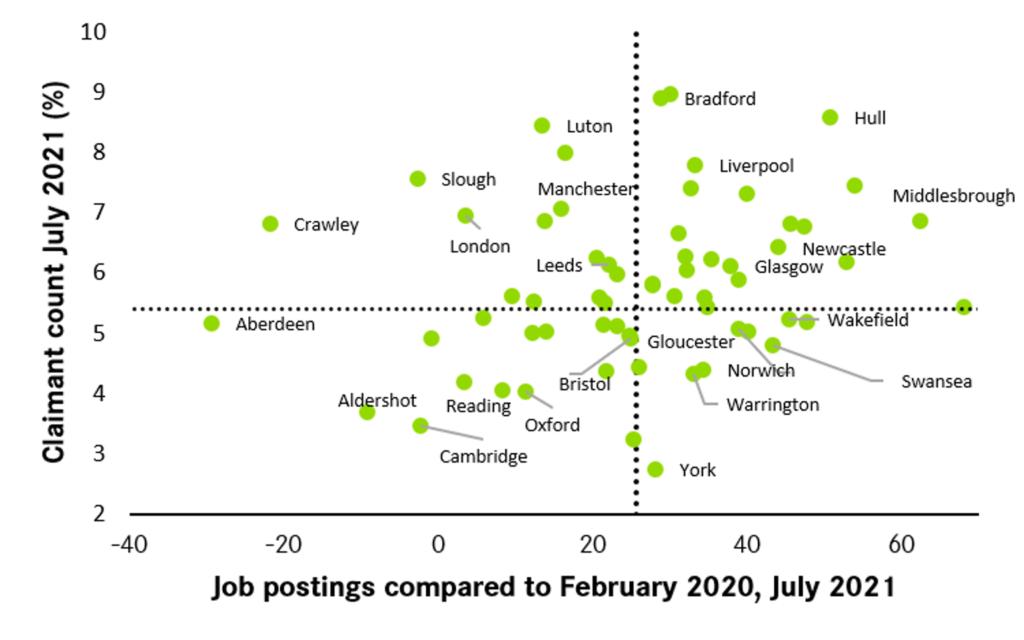 The biggest concern is for the places in the top left, made up of large cities such as Manchester and aviation-reliant places like Luton. They both have high claimant counts and have seen a weak recovery in vacancies. Places like Slough, Crawley and London also have high shares of people claiming furlough.

With international travel unlikely to recover any time soon, this data suggests that places like Slough and Crawley will see a spike in unemployment when furlough comes to an end without an extension in support for this industry. As for the large cities, whether a return to work materialises in September is likely to be very important to how their jobs market continues to recover. Without it, the city centre staff of shops, bars and restaurants who are likely to continue claiming furlough may find themselves out of work.

Coronavirus Unemployment
What do the latest furlough statistics tell us about labour markets in the UK’s largest cities and towns?

Data from this month's update shows a recovery in all cities and large towns, however, significant challenges remain for places.

Nine out of 63 cities and large towns have recovered to their pre-pandemic level of job postings, with the North and Midlands outperforming the South and South East.