One of the curious patterns thrown up by A Century of Cities is the poor performance of our coastal cities. Today many struggle on a range of economic indicators. But it hasn’t always been that way.

The fall from grace of the cities may come as no surprise – the advent of the package holiday, and more latterly the budget airline, has fundamentally changed tourism in the UK. Interesting though, these places haven’t historically just been based on tourism. Back in 1911, many had high proportions of knowledge intensive jobs too. In England and Wales, 9 per cent of jobs were knowledge intensive. In Hastings it was 12 percent. And in Southend it was 18 per cent.

Surprised by this finding, we had a look at other traditional seaside towns when doing the research. And the same was also the case in those places. In Bognor and Margate, 12 per cent of jobs were in knowledge services. And in Rhyl it was 14 per cent.

Now those cities that have a history of knowledge jobs tend to have high shares of knowledge jobs today. But many coastal cities stand as the counter examples to this. The jobs growth they have seen has tended to be in lower skilled activities, and the fragility of their economies is reflected in things like lower average wages, low skill levels and high benefit dependency.

There is one clear exception to this though, and that is Brighton. As part of the research for A Century of Cities we looked in more detail at Brighton and Blackpool, and the two offer an interesting comparison. The chart below appears to show that Blackpool has far outstripped Brighton in terms of job creation over the last 100 years, but a closer look tells a different story.

Between 1911 and 1951, Blackpool was a star performer. Its total number of jobs close to doubled over the four decades, despite the Great Depression and the Second World War. Tourism was an important component of this, but other areas such as manufacturing contributed too. Brighton’s growth was much more modest, but it did see growth as well.

Jobs growth in seaside towns since 1911 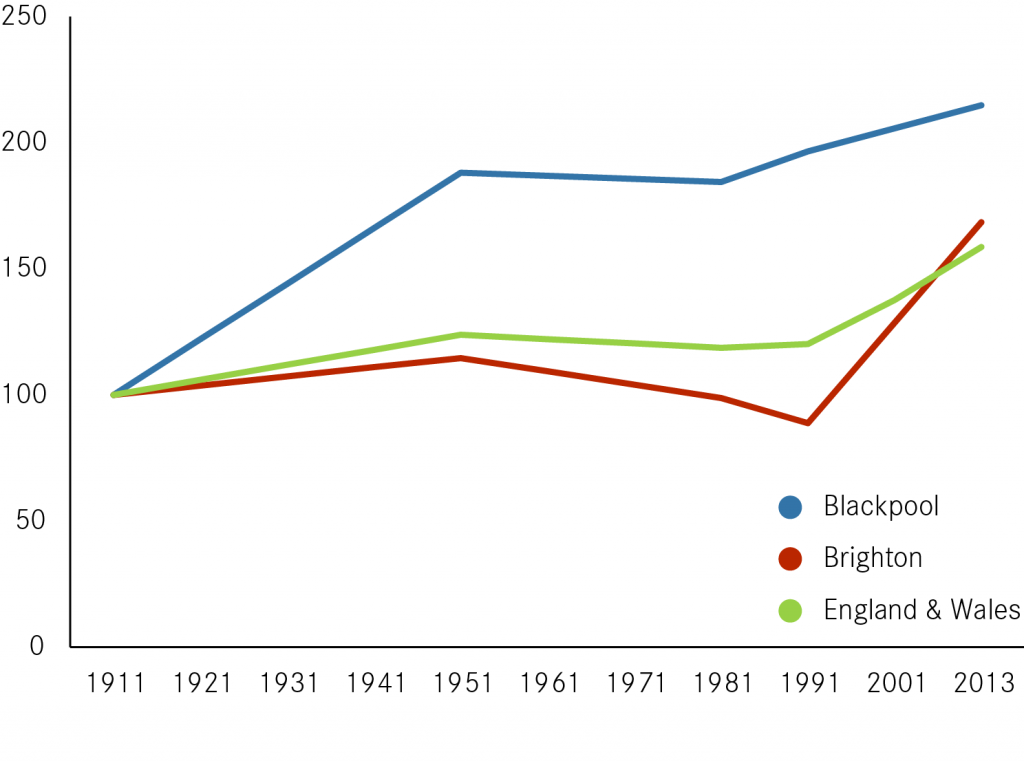 As with many cities, both places struggled in the post-war period. Blackpool’s meteoric growth was halted, while Brighton went into reverse – by 1991 its economy was smaller in jobs terms than it was in 1911. At this stage it looked like Brighton’s fortunes would follow those of its coastal city cousins.

But Brighton’s turnaround from this point has been remarkable. The city had around 70,000 more jobs in 2013 than it did at the start of the 1990s, close to a doubling of its total number of jobs. This made Brighton the fastest growing city of all British cities since 1991. The growth of knowledge-based employment, particularly in its city centre, has been a key part of this overall growth.

Blackpool has also seen growth in its number of jobs since 1981. The difference to Brighton is that many of these new jobs have tended to be in lower skilled activities. And it’s for this reason that latter performs much stronger on a range of economic indicators than the former.

In Brighton, 44 per cent of residents had a degree in 2013, while in Blackpool it was 28 per cent. The employment rate in Brighton in the year to June 2014 was 76 per cent, compared to 70 per cent in Blackpool. And Brighton ranked 44th out of 63 cities for the size of its per capita welfare bill in 2012/13, while Blackpool had the largest per capita bill of all cities (partly reflecting its large proportion of residents that are claiming state pension).

The struggles of coastal towns have been the focus politicians for some time. In the last election Labour launched a seaside manifesto, while the Coalition government created the Coastal Communities Fund. The approaches taken mirror those that have focused on manufacturing in recent years – instead of attempting to help places adapt to changes in the economy, they encourage the replication of their economies.

From a place-making point of view, the investments made by the Coastal Communities Fund have their merits. But on their own these investments will have very little impact on the economic fortunes of the places that receive the money. Creating promenade cycle paths and landscaping may improve the appearance of a seafront, but it will do little to change low average wages and high levels of deprivation.

Brighton’s resurgence has been based on its ability to reinvent its economy, supporting jobs growth in knowledge-based industries. If future policy is to have an impact in other coastal cities then it needs to shaped by the lessons from Brighton’s success.

Previous blog in the series: Hanging By A Thread