June 21st was supposed to be ‘Freedom Day’. But Monday’s announcement that further restrictions won’t be lifted for another four weeks will once more have a negative effect on the labour market, with places more reliant on the industries currently still subject to restrictions more likely to be negatively affected. Using the latest statistics from the Office for National Statistics and HM Revenue and Customs we can see what this means in practice for the UK’s largest cities and towns.

1. The number of people claiming unemployment related benefits is declining in almost every city and large town

As of May 2021, some 2.5 million people in the UK were claiming either Job Seekers Allowance or the work-component of Universal Credit. This is still 1.2 million people higher than before the pandemic, but the lowest number since then, suggesting the labour market might be starting to show some signs of recovery.

This appears to be the case in most cities and large towns. Compared to February 2021 – at the peak of the third lockdown – every city and large town apart from Luton now has fewer people claiming unemployment related benefits. Birmingham, Bradford and Hull continue to be the three places with the highest claimant count rate, but they are no longer dangerously hovering around the 10 per cent mark, while York, Exeter and Cambridge continue to be the places with the lowest claimant count rates (see Figure 1).

2. Cities and large towns in the North and Midlands are seeing the strongest recovery in job postings

Job postings data also appears to suggest the labour market is recovering. According to Indeed, overall job postings in the country have now surpassed their pre-pandemic level: as of the beginning of June, there are now 5 per cent more job postings than in February last year.

This is true in 48 of all our 63 largest cities and towns, with urban areas in the North and Midlands experiencing the fastest recovery. In Middlesbrough, Hull and Stoke there are now 40 per cent more job postings than in February 2020. Seven of the 10 places with the fastest recovery in job postings are cities and large towns in the North and Midlands, while none of the places still lagging behind their pre-pandemic level is up North, with Aberdeen, Crawley and Belfast experiencing the slowest recovery (see Figure 2).

3. Aviation-reliant towns, tourist hotspots and London continue to see the highest take-up of the furlough scheme

Despite the encouraging signs from job postings and the claimant count, as of the end of April, 3.4 million people in the UK were still on furlough, with the ONS estimating 1.8 million still being on the scheme as of the end of May.

While the current data shows a sharp decline in the use of the scheme compared to the peak of the third lockdown in every city and large town, places reliant on the aviation industry, large cities and tourist hotspots continue to have the largest take-up of the scheme. As of the end of April, Crawley, Slough, Blackpool and London still had more than 13 per cent of their eligible residents on the scheme, compared to less than 9 per cent in Barnsley, Newport and Swindon (see Figure 3).

Figure 4: The relationship between take up of the furlough scheme and job postings 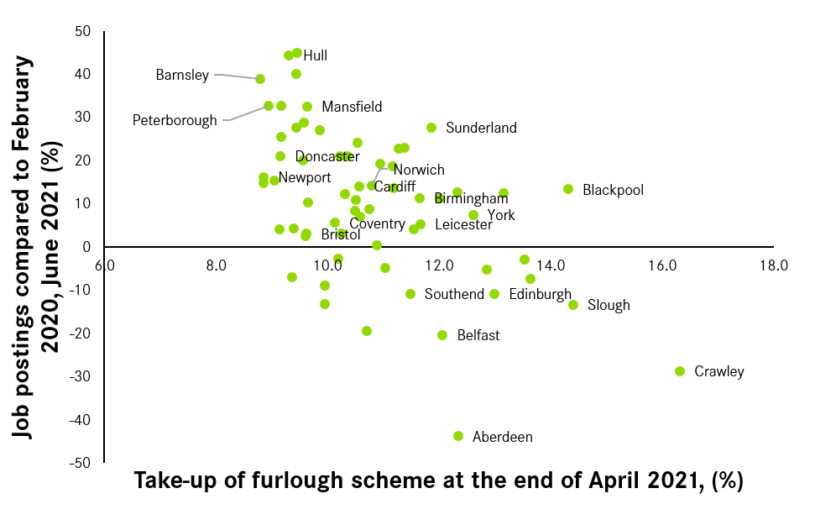 This seems to suggest that while many cities and large towns in the UK are now showing signs of recovery from the worst effects of the pandemic, some are still lagging. The tapering of the Coronavirus Job Retention Scheme starting from next month and its complete phase out expected at the end of September once again raise questions about the fortunes of industries and places still largely affected by the pandemic and its restrictions. To avoid a cliff-edge rise in unemployment at the end of the summer, the Government should now turn to look at more tailored interventions aimed at continuing to protect workers in specific sectors that will continue to be affected by the pandemic beyond September.

Coronavirus The Future of Work Unemployment
Which jobs are currently most reliant on the Coronavirus Job Retention Scheme in the largest cities and towns?

While retail and hospitality account for the largest shares of jobs on furlough across the country, the export base of some places has been particularly affected, raising concerns about their ability to bounce back.