Alongside the publication of Cities Outlook 2015 last week, we also released our new online Data Tool.  The tool allows users to interrogate our latest and historical data on indicators such as jobs growth, earnings and house prices for the UK’s 64 largest cities.

In addition to being able to view annual figures across a range of indicators, we will also be updating the tool with the latest labour market statistics every month. This will allow users to view and compare JSA claimant and youth claimant figures from January 1996 with the most recently available data.

With regard to this month’s release, December 2014 saw the continued decline in the number of JSA claimants nationwide, with the national rate down 0.9 percentage points on the previous year, also resulting in a 0.2 percentage point reduction on its pre-recession (February 2008) level. At the city level, two thirds of cities saw a reduction in the number of claimants compared to November’s figures, with almost a third unchanged and only two cities – Blackpool and Hastings – seeing a marginal increase, each of 0.1 per cent. All cities saw a reduction in their claimant count compared to the same period in 2013. 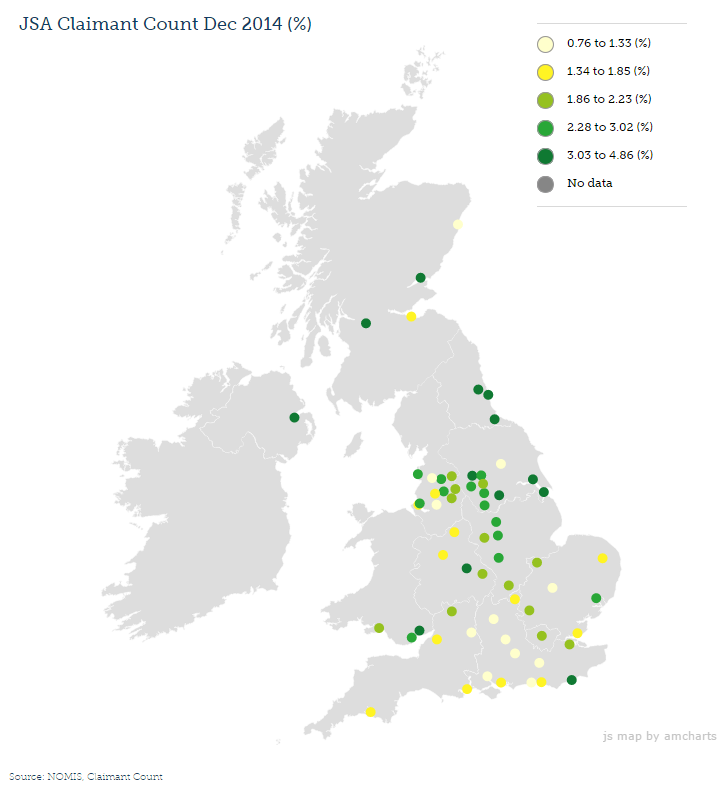 The map above – also available through our Data Tool –reveals that the disparity between those cities inside and outside the South of England is particularly evident when looking at claimant count figures. In fact, of the 37 cities with a higher than 2 per cent claimant count, only six cities – London, Gloucester, Luton, Chatham, Ipswich and Hastings – are located in the South of England, while Hull has the highest count of 4.9 per cent. Southern cities subsequently dominate the lower percentages, with Oxford, Aldershot and Cambridge showing less than 1 per cent of JSA claimants to working age population.

Youth unemployment has also continued to fall, with Rochdale, Liverpool and Birkenhead seeing the greatest reductions both year on year and compared to pre-recession (February 2008) levels. However, the proportion of youth claimants in Belfast, Grimsby, Hull and Middlesbrough remain above five per cent, and Belfast and Bradford remain the only cities not to have recovered to pre-recession levels of youth unemployment.

As the economic performance of cities continues to sit high on the political agenda ahead of the General Election, disparities between them on issues such as claimant count, jobs growth and housing affordability will continue to dominate much of the debate over the coming months.

Don’t forget that you can now compare cities across these and a host of other indicators via our new data tool. Just click here or select the ‘Data Tool’ at the top of the page to get started. It’s still in beta while we test out how it’s working – there’s a bug report button at the bottom right if you spot minor issues. For more general comments and feedback, please contact Rita Beden.