Transport policy is often seen as a pet project amongst politicians, having been incessantly toyed with over the past half a decade. Boris Johnson’s recent commitment to reopen railway lines closed by the Beeching cuts are the latest example of this. But how connected is the issue of transportation to the underperformance of struggling towns? This blog, the third in a series of four blogs on towns, uses travel time data to show that it doesn’t look like a driving factor.

Transport alone doesn’t appear to be the main factor in explaining the performance of the two exceptions highlighted in this series: a strong town near a weak city (STWC), or a weak town in the orbit of a strong city (WTSC). Figure 1 shows that in general, travel time differences across different town types are minimal. Towns next to strong cities seem to have slightly shorter commuting journeys. Meanwhile commuters living in strong towns next to weak cities have the longest commute on average.

This reflects the findings of the case study in the second blog in this series which looked at the towns in the hinterland of Birmingham. It found that a disproportionate share of high-skilled commuters did not choose to locate in the closest town, but instead opted for the towns which were more attractive. Weak towns next to strong cities might have the shortest commuting time to highly-paid jobs, but don’t benefit from it.

Commuting time to the closest city by town type 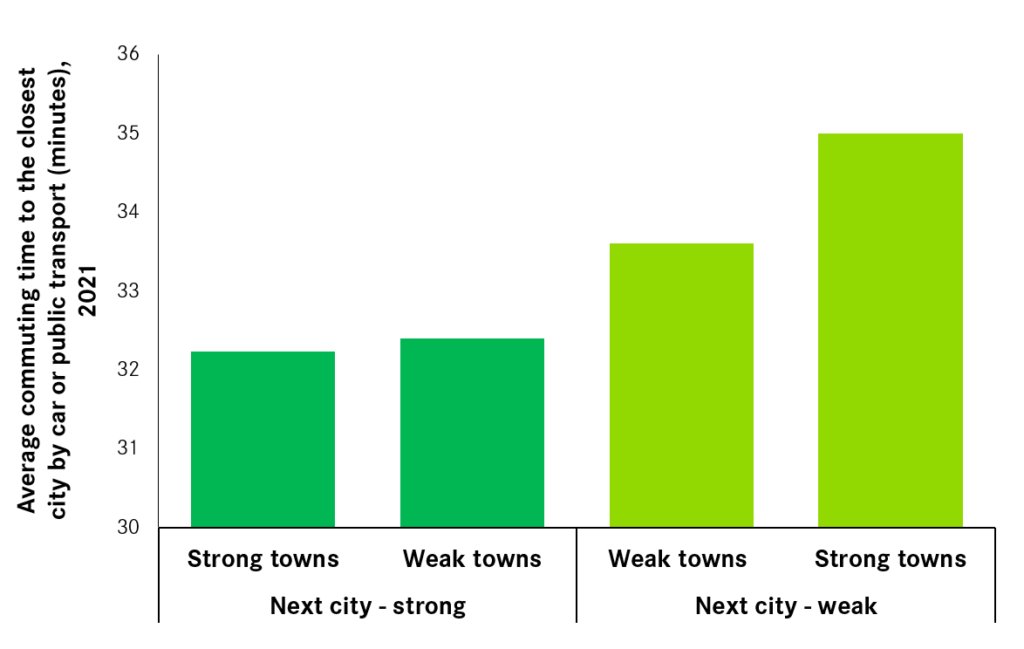 In addition to having a slightly shorter commuting journey to the nearest city, people living in weaker towns next to strong cities have more cities within an hour’s commute than any other town type (Figure 2). This connectivity applies particularly to towns in West Yorkshire, with people living in Pontefract, Halifax and Castleford all having seven to eight cities commutable within 60 minutes. Yet despite this connectivity, in 2011 they all had an unemployment rate of more than 14 per cent. Transport isn’t obviously the answer to the problems these towns face.

Figure 2: Weak towns next to strong cities are in the proximity of more cities than other town types

Average number of cities reached within 60 minutes of commuting time 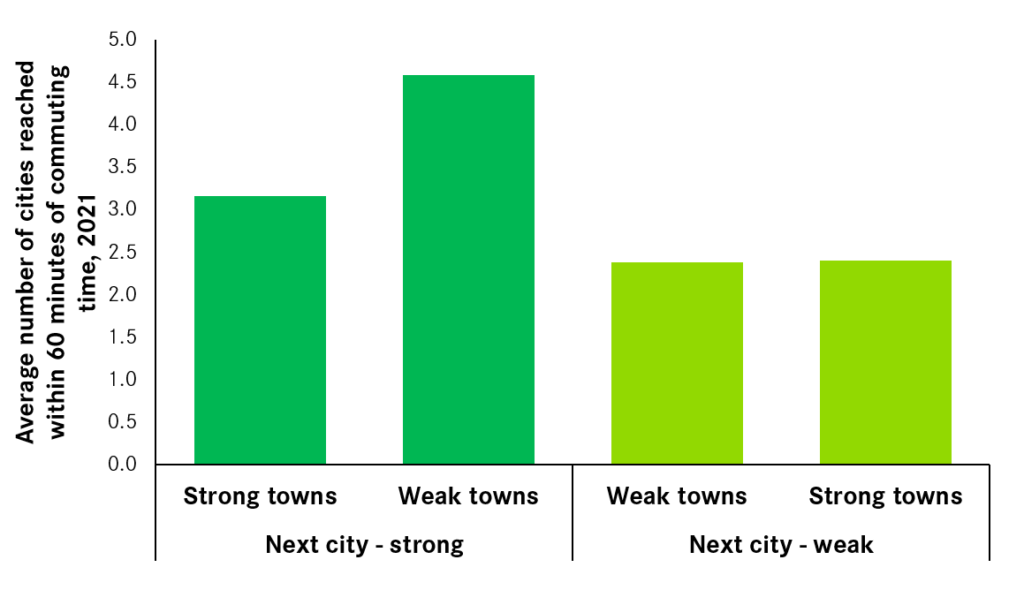 The distance to a strong city matters for towns’ performance

Reflecting on the findings in the previous blogs in this series, what seems to be more important is the performance of the neighbouring city. Figure 3 shows that while the commuting times to the next city seem only to play a minor role, the proximity to a strong city is strongly linked to the overall performance of a town. Given that all towns in the hinterland of cities share more or less the same commuting time, the missing link between weak towns and strong cities is not a transport problem but mainly the outcome of many cities in the UK underperforming.

Hartlepool for instance has three weak cities within a 60-minute commute – Sunderland, Middlesbrough and Newcastle. But given that all of them are underperforming and do not offer enough productive jobs, the residents of Hartlepool seemingly get little benefit from this, and suffer from an unemployment rate of 19 per cent. In contrast, the population of Fleet can also reasonably commute to three cities, however as these cities are classified as strong, the jobs they provide help to keep unemployment in Fleet to around 4.4 per cent.

Figure 3: The longer the commuting time between a town and a strong city, the higher the unemployment in a town

Town’s strength and commuting time to next strong city 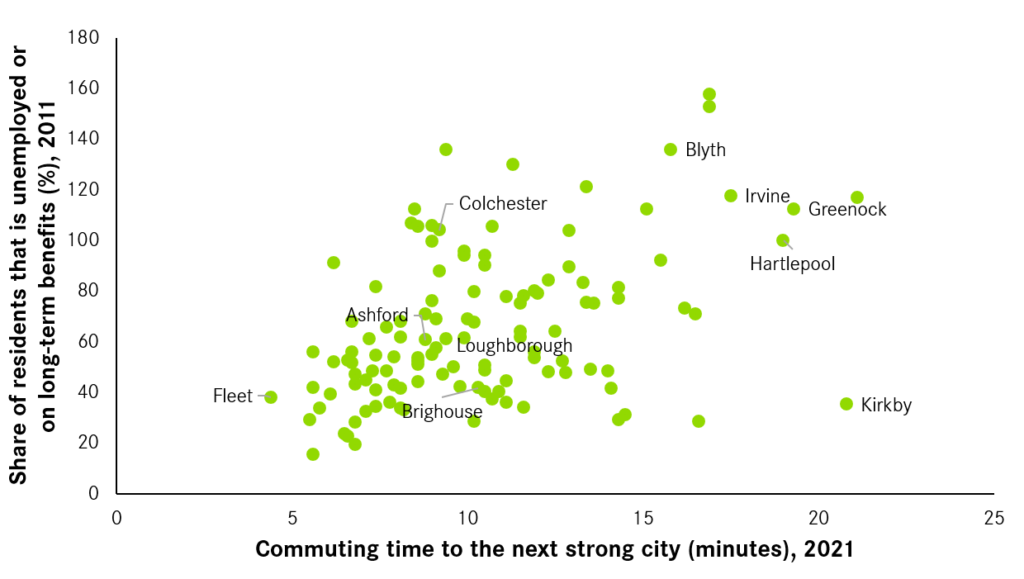 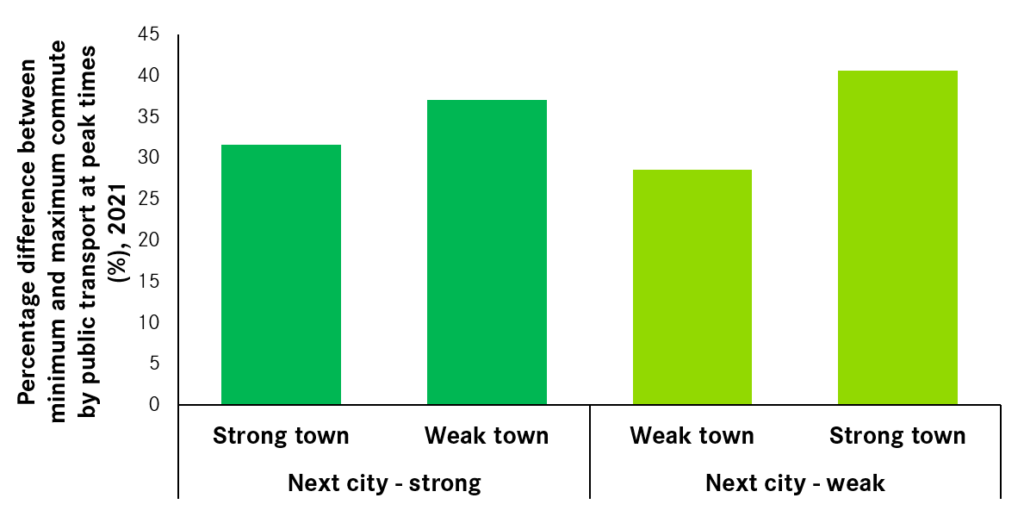 The short analysis showed that weak towns are not systematically disadvantaged when it comes to different aspects of connectivity to cities. In contrast, weak towns – particularly those in the proximity to strong cities – seem to often have better connectivity on a range of different indicators. While public transport systems should be improved wherever there is a clear weakness, it should not be in the main focus of levelling up towns. Rather, policy should address bigger barriers such as skills, housing and crime in these places. Specific policy recommendations can be found in the piece ‘So you want to level up’.

Read the final blog in this series here.

City Minutes: How can we level up struggling UK towns? 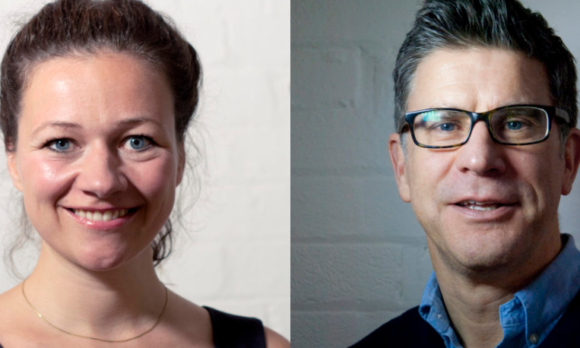 Other blogs in this series

Levelling up Towns
What do successful towns tell us about the levelling up agenda?

Why levelling up towns must mean increasing investment in skills, housing stock and the attractiveness of a place – in conjunction with improving the performance of cities.