That was one of the key messages discussed last week at a Centre for Cities roundtable held in partnership with the OECD and the Key Cities Group. The roundtable brought together senior practitioners from across UK cities and Whitehall, as part of the international launch of two new books from the OECD – Governing the City and The Metropolitan Century. The books explore the challenges and opportunities faced by rapid global urbanisation, the increasing economic significance of cities to the global economy, and how leadership and governance in city-regions affects their ability to grow and be productive.

Luiz de Mello, Deputy Director at the Public Governance and Territorial Development Directorate of the OECD, introduced the work alongside his colleague Alexander Lembcke (the audio and slides are available here). In addition to exploring the link (or not) between city size and productivity, Luiz covered several other themes in his presentation that are current and sometimes contentious debates in UK urban policy:

I’ll come back to these issues in subsequent blogs. For now I want to set out in a bit more detail the OECD’s findings about city size and productivity.

The three graphs taken from The Metropolitan Century below show clearly the difference between the UK on the one hand, and the US and Germany on the other. The book also provides some commentary and explanation of why we see the trends that we do. 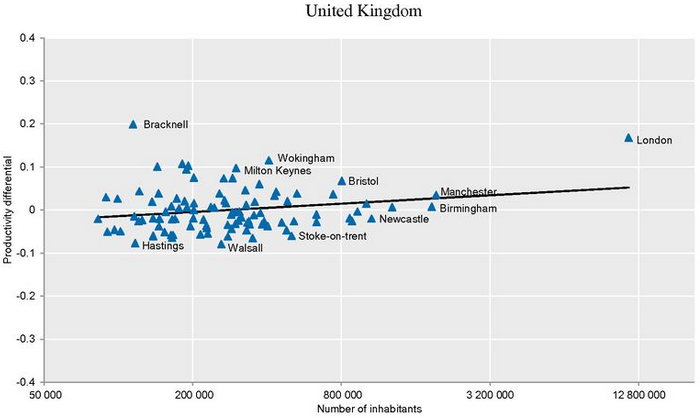 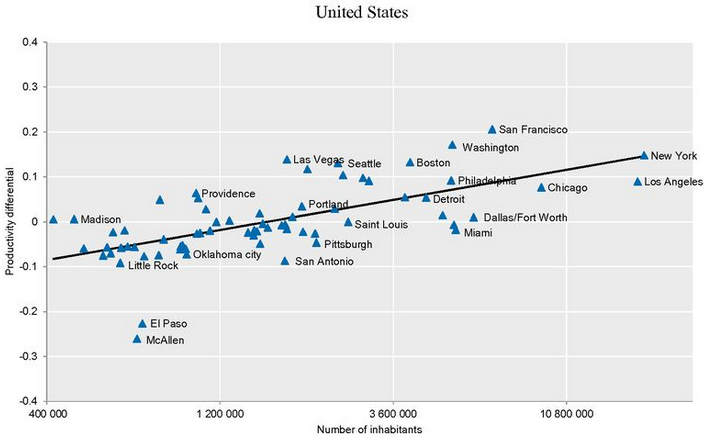 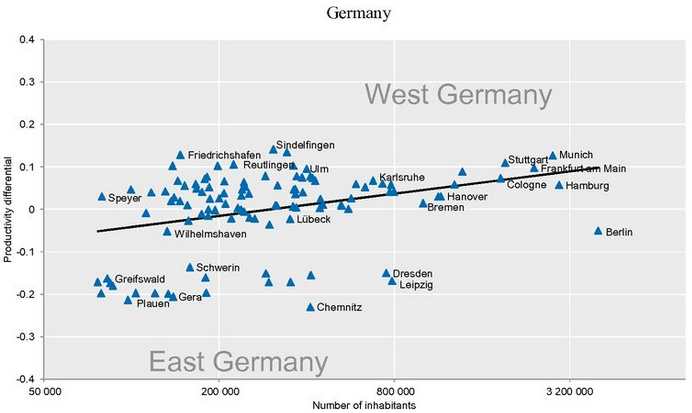 In the US, the productivity premium in cities such as San Francisco, Washington, Seattle and Boston – is higher than their size would predict. In contrast, cities such as Los Angeles, Miami, Dallas and Chicago have lower productivity premiums than expected. The book notes that these are relatively sprawling cities with low employment densities and fragmented labour markets.

In Germany, the most noteworthy features highlighted in the book are the East-West divide – cities in West Germany have much higher premiums than those places in the East – and the strong performance of many mid-sized German cities, which the book suggests reflects the presence of highly productive small and medium-sized manufacturing firms in these cities.

What should we make of these findings? I think they begin to hint at the need to better understand the inter-relationship between three factors – size, structure and skills. London benefits from its size because it has lots of people (workers and residents) and an economic structure (heavily weighted towards knowledge intensive services) that disproportionally benefit from being big. Other UK cities, with the exception of Bristol, do not. Manchester and Birmingham by comparison have some size (although they’re only about a quarter the size of London) but their economic structures and skills profiles are relatively weak, which means they are less able to take advantage of their size. In contrast, Cambridge is small in scale, but is close to London and has a very strong skills profile and a knowledge-intensive economy.

Focusing more on the inter-relationship between these three factors will help us move beyond the rather unhelpful polarised debate between those in favour of agglomeration-led models of urban development, and those that are sceptical of its merits.

Both books are a welcome addition to the debates about the role of cities in improving the lives of people wherever they live. From an evidence perspective, they help us better understand why some cities are successful and why some are not, and how they contribute to the success of their host countries. And from a policy perspective, they shed some light on some of the current UK debates that will play out over the next few years: the dominance of London and whether this helps or hinders the rest of the UK; the focus on big cities – Greater Manchester, Greater Leeds and Greater Sheffield – within the English devolution and growth agendas; and the emphasis on improving the connectivity between our northern big cities to create a ‘Northern Powerhouse’, which would act as a counter-weight to London.