It is widely known that since the financial crisis self-employment has grown much faster than overall employment. What is less well understood is that this has principally been an urban phenomenon, with self-employment rising 40 per cent faster in cities than elsewhere between 2008 and 2016. As a result, 52 per cent of all self-employed people now live in cities. But how did that happen? And what are the policy implications?

This is particularly the case in large cities and those close to airports. Slough, Luton and Crawley – all close to airports – are the three cities with the highest share of self-employment in the transport industry per 10,000 population of all UK cities. They are followed by larger cities such as London, Liverpool and Bradford. 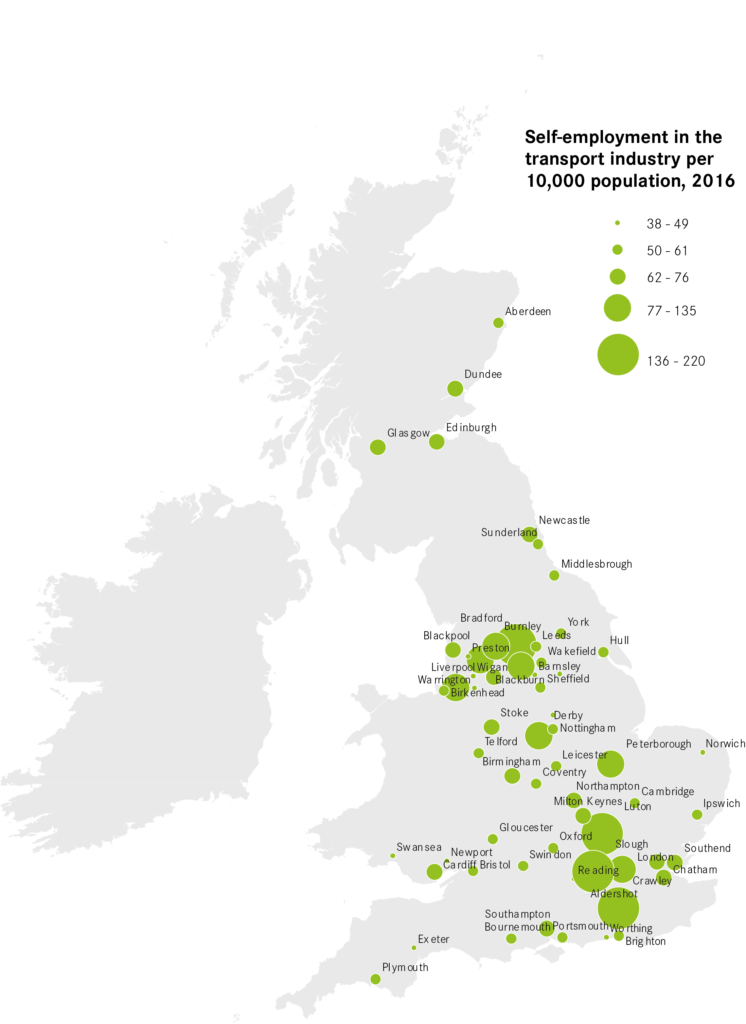 Technology can create new job opportunities, but it can also limit them. The recent rise in self-employment in the transport industry has meant an increase in self-employment, especially in cities. But it is unclear if this will continue to be the case in the future.

Almost a third of road transport driver jobs – a category which includes taxi drivers and other private hire – are at risk of being automated by 2030, overtaken by driverless cars and other technological improvements.

Given the high rate of self-employment in the industry, traditional forms of support to help people to adapt to the changing world of work such as employer-sponsored on-the-job training will need rethinking. Skills in particular is an area that needs attention given that self-employed individuals are much less likely to take on training.

With technological improvements, some industries will continue to be successful while requiring fewer people. In a world of driverless cars, the taxi and private hire industry could be one of these. As such – even without being bound by any ‘employer-employee’ relationship – the taxi and private hire industry and other industries with high rates of self-employment should nevertheless actively contribute to support self-employment workers to acquire new skills.

For individuals to succeed in an ever changing world of work, we need to ensure our skills system is flexible enough so that everyone is able to access opportunities to upskill and retrain.

Please note this work contains statistical data from HMRC which is Crown Copyright. The research datasets used may not exactly reproduce HMRC aggregates. The use of HMRC statistical data in this work does not imply the endorsement of HMRC in relation to the interpretation or analysis of the information.