Any discussion on the struggles that businesses face almost inevitably turns to business rates. While it is true that the business rates system is in dire need of reform, it is also important to note that there are currently a considerable number of businesses that pay no rates at all. And there is a clear geography to this.

In total, these exemptions total almost £5 billion, which is a massive amount – almost half of the total figure pledged by Boris Johnson in yesterday’s announcement for a planned ‘green recovery’. These reliefs are more than 15 per cent of the overall business rates revenue generated in England. The largest reliefs are those given to charities and small businesses.

Businesses in the North of England or on the coast are currently most likely to benefit from these reliefs (Figure 1). In places such as Southend, Bradford and Blackburn, reliefs (excluding transitional relief) make up more than a quarter of the gross revenue raised from the tax in these cities. In contrast, in cities such as Crawley, Reading and Slough the share of reliefs provided is much lower at between 7 to 10 per cent of the gross revenue generated. 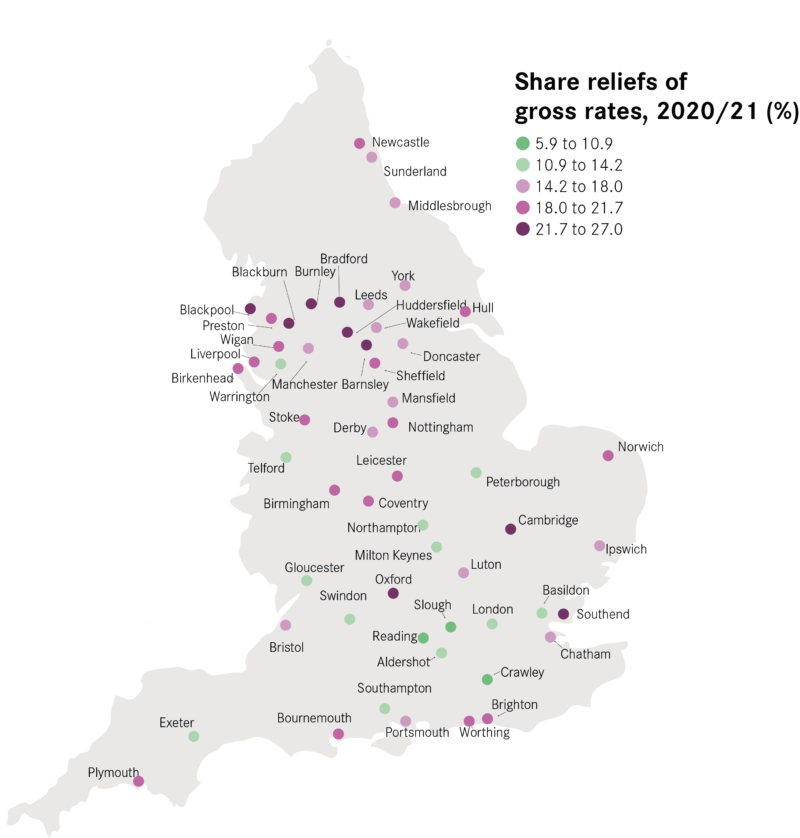 Source: Government, National non-domestic rates collected by councils in England: forecast for 2020 to 2021

A key reason for this variation is the differences in property values across the country. Small Business Rates Relief is based on estimated rental values. Any small business in a property with a ‘rateable value’ (broadly the assessment by the Valuations Office Agency of the rent of a property) lower than £12,000 doesn’t pay any business rates. And as Figure 2 below shows, cities in the North of England tend to have larger shares of their properties below this threshold. In Barnsley and Burnley more than four out of every five businesses that have their rateable values available are expected to be exempt because of this relief. In contrast, for Crawley and Slough, this figure is much lower at less than one out of every two. 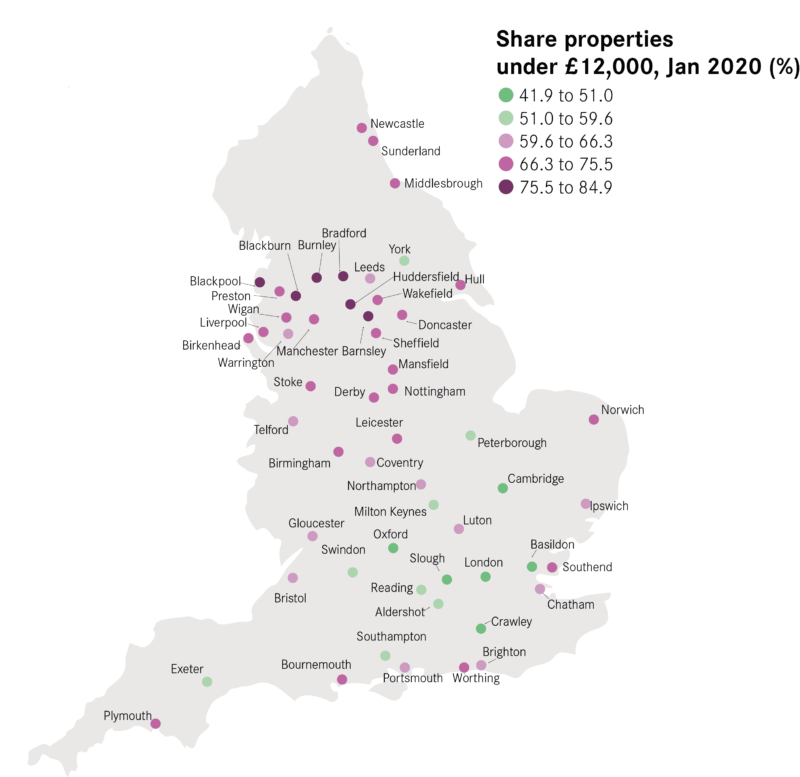 This means that there are a large cohort of businesses that are shielded completely from the vagaries of the system, especially in many northern cities. But those that do pay rates in these cities fall foul of a different type of relief – transitional relief. This relief eases the current cliff edge businesses face when rates are adjusted (this cliff edge appears because revaluations occur far less frequently than they should). For businesses that see a large jump in their bills, this is good news – it smooths out the overall increase. But for businesses that see a fall – many of which are in the North – this is bad. Not only have they been overpaying for years due to the infrequent nature of revaluations, but they have to continue to overpay too as the fall in their bills are also staggered.

This is one of a number of examples where the current web of reliefs hinders the working of the system. And it is for this reason that Small Business Rates Relief, alongside many other reliefs should be abolished as part of the wider reform of the system, as recommended in a Centre for Cities’ recent report. The reliefs currently in place have, for the most part, been introduced as a sticking plaster in response to the larger issues with the tax. A better functioning system should mean that such reliefs are largely unnecessary.

But here is the rub: businesses and business leaders who rightly call for business rates reform should note that this will mean that reform, if done properly, will not mean that every business will be a winner. The flawed business rates system is an easy target to point the finger at. But the system’s shortcomings must be viewed separately to the struggles of businesses in some parts of the country, in places where they are least likely to pay any rates. Any reform of the system may actually increase the tax liability for more businesses than see a reduction.

A 10-point plan for ensuring that a reformed business rates system puts local economic growth at its heart.

Future of cities High Streets
Going Dutch: What can the Netherlands teach us about business rates reform?

Change can be hard. Changing something as complex as the business rates system is no exception to this - but the Dutch experience shows it is not only possible but also well worth it.