All “non-essential” high street businesses have been hard hit by the restrictions, but for retail businesses like Debenhams, the pandemic has been the final nail in the coffin. The fact that the online giant Boohoo announced it would save the brand (but not the physical stores and the 12,000 jobs) has reopened the following debate: is online shopping killing ‘physical’ retail – and the high street by extension? Has this been massively accelerated by the pandemic?

Data shows that online shopping may indeed represent a threat, but the story is more complex.

…At least not everywhere.

Pre-pandemic data shows there is no clear relationship between the share of vacancy rate on the high street, and the share of all spend that was made online (Figure 1). In cities like Cambridge, London, Oxford and Brighton, it’s quite the opposite, but it could be argued that these are outliers because they’re tourist destinations. But take Bradford, Ipswich and Birmingham: all have similar share of total spend made online, but very different vacancy rates.

Figure 1: Vacancy rate on the high street and online shopping 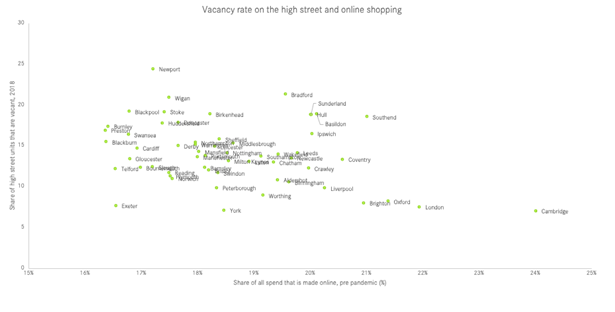 Drilling down into the detail of the data, there is no relationship either between the share of ‘non-essential’ spend (clothing, for example, as opposed to groceries) which was made online, and vacancy rate on the high street. Places like Worthing, Plymouth, Leicester, Sheffield and Birkenhead all have a similar share of their non-essential spend made online, but very different vacancy rates. If anything, online share (as well as the size of each online transaction) was slightly higher in richer, more prosperous places.

What really matters is local spending power and footfall

Or, in other words, the size of the pie (how much money people have to spend) rather than how it is split. And this is shown in the data: there is a clear relationship between residents’ wages and vacancy rates. What that means is that the performance of the wider economy, and subsequently the presence of high-paid jobs which put money in people’s pockets, is the most important factor for a vibrant high street.

The performance of the city centre economy is important within this, not only because higher skilled service businesses tend to locate there, but because this activity then pulls in workers, who spend money while they’re there. This is shown in Figure 2: strong city centres (top right corner) with larger, higher-skilled export bases have much lower vacancy rates than weaker city centres (bottom left quadrant). And it’s shown by the struggles of London and other large city centres during the recovery from the first national lockdown – if jobs exist in a city (being done at kitchen tables and back bedrooms) but workers aren’t going into the centre then city centre shops, bars and cafés struggle. 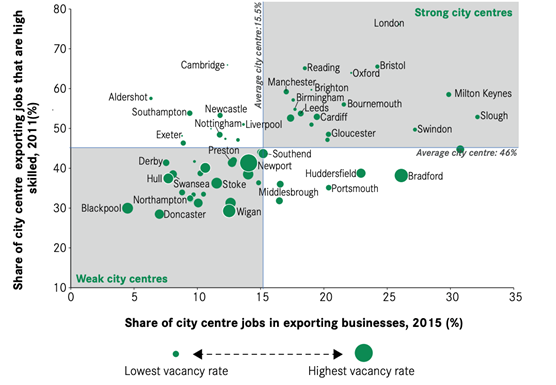 While much of recent discussion is about the threat of online to high street retail, more successful city centres are already well on the way to adapting to competition from online. Having many thousands of workers commuting in many days a week with money in their pockets creates a market to sell to. What is being sold to them has changed – previous Centre for Cities research has shown that strong city centres have a higher share of high street units designated for food, drink and leisure than weaker ones, something which is likely to have occurred in response to the rise of internet retail.

Reasons to be optimistic: the pandemic is unlikely to drastically change that

There has been a lot of speculation recently about the impact of the pandemic on our shopping habits. While it is true that the share of online shopping increased (on average from 19.5 to 23.7 per cent of all spend between February and October), it was not significantly higher (especially when considering that the denominator, total spend, shrank over that period, and that a number of offline shops were shut).

Furthermore, arguing that the pandemic accelerated pre-existing trends might be true overall, but not at a more granular level. Places with the highest pre-pandemic online share are not the ones which saw the biggest online shopping boost. Instead, it is more likely to be a result of the severity of the restrictions. When restrictions were briefly lifted, back in August, bricks and mortar spending returned to its pre-lockdown levels in all 63 cities. And footfall data from our High Street Recovery Tracker confirmed that people did return, showing that there is still demand to go to the high street.

While the last year has been particularly tough for high street businesses, there will be life after the pandemic for British high streets. But those that thrive will be those that sit within a catchment area where disposable income is high, have a large number of workers commuting in (even in a more flexible way) and have shifted the types of businesses that are located on them. So the challenge for policy is to create jobs that put money into people’s pockets, especially in city centres, and for high streets to adapt to offer something different to online to capture this potential spend.