The announcement today that BIS will close its central Sheffield office is likely to once again spark the debate about the location of civil service jobs across the country. But what does the spread across our cities look like?

Looking at all jobs in the civil service shows that they are spread across England and Wales. At 21 per cent, London unsurprisingly accounts for the highest share. But while this is high, it is in line with the total share of all jobs that are in the capital. Other English and Welsh cities account for 51 per cent of civil service jobs, with Birmingham, Manchester and Newcastle having the next largest shares.

Where the real divergence occurs is in grades. Looking at the highest grades (senior civil servants and those in Grade 6 and 7 jobs) shows that half of these positions are in the capital.

Meanwhile, when looking at the lowest grade – admin officers and assistants – shows that only 12 per cent of these jobs were in London in 2015, while 72 per cent were in other cities in England and Wales. At around 4 per cent each, Newcastle, Birmingham and Manchester had the next highest shares.

This split has had large implications in light of recent austerity measures. As the chart below shows, the vast majority of all cuts to civil service jobs have been accounted for by cuts to jobs at lower grades. 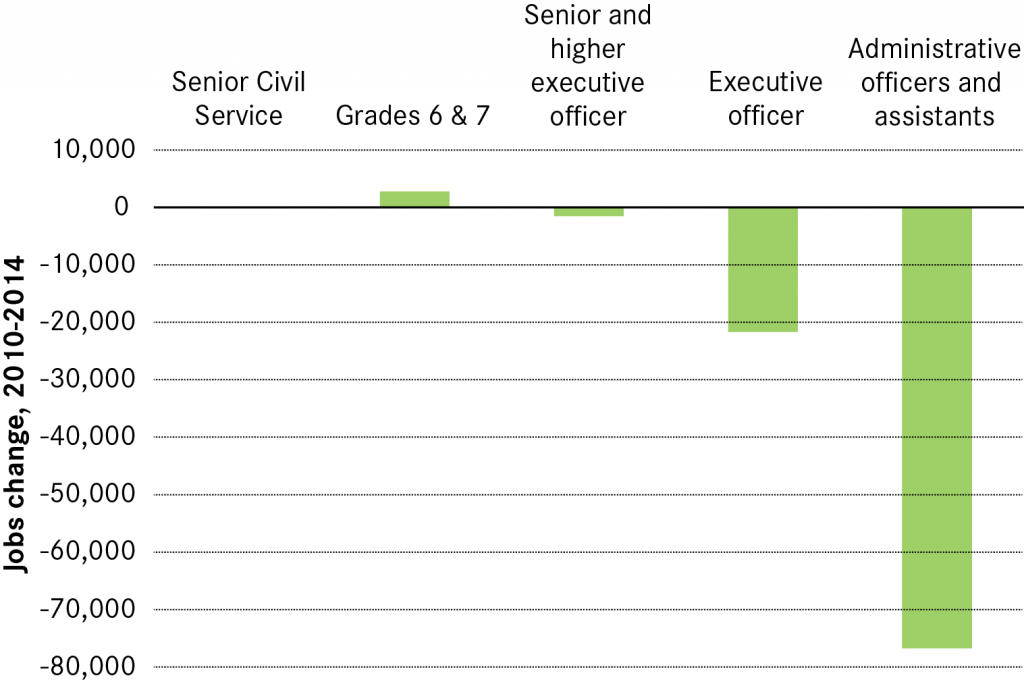 And given the geography of these lower grades, it has been cities outside of London that have been impacted the most. Using the typology used in Cities Outlook 2016 shows that it is those cities with the highest welfare spending and lowest average wages that have seen the largest cuts – a fall of 17 per cent, compared to a cut of 11 per cent in high-wage, low-welfare cities.