Openness and skills are the key to Britain’s future economic success not isolation and caps. There’s nothing quite like a debate about immigration to highlight the divergence between the economic evidence and politics.  Ed Miliband’s speech on immigration last week certainly caused debate. But similar to other commentators I think his analysis of the ‘problem’ is slightly awry.

Our latest research published last week looks at how open cities are to business – both foreign-owned and home-grown.  Our analysis finds that those cities with open and entrepreneurial economies tend to perform better.  Interestingly these cities also have more non-UK born individuals living in them.  The greater diversity of both the business and residential bases in these cities is likely to have important implications for their long-run economic success. 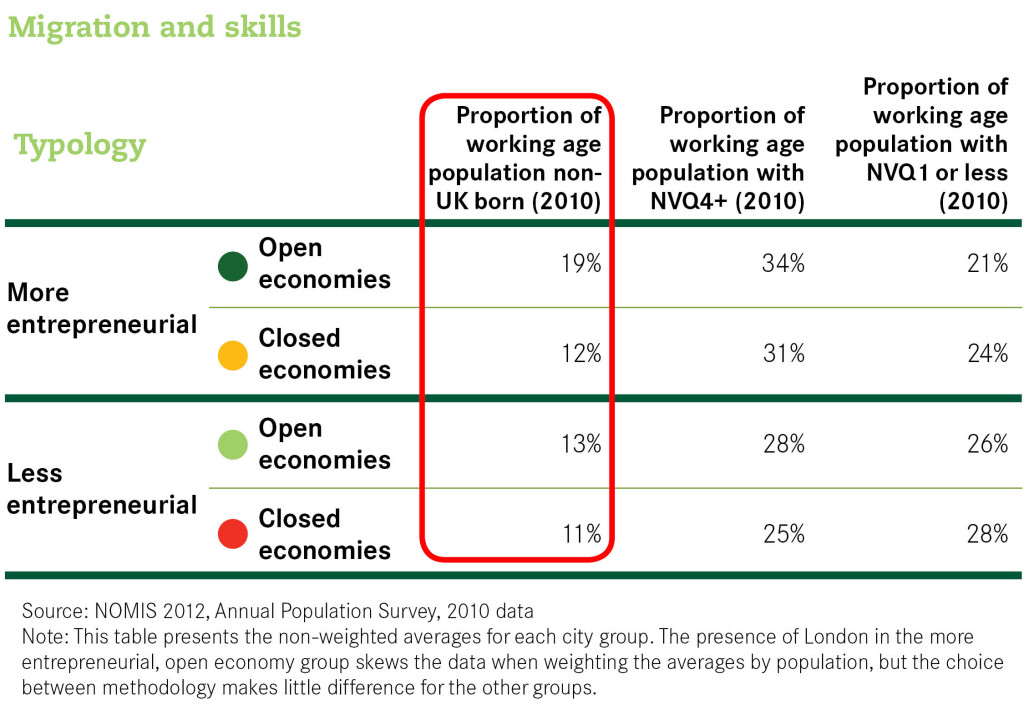 Miliband also suggested that the private sector is preferencing Eastern European workers over British workers.  Whilst this might be the case, unfortunately I think this says more about the performance of the British education system than the behaviour of employers.

Our research last year – Learning Curve – pointed to big challenges in the education system.  The report published in November last year showed that half of all young people in cities are not getting the grades in Maths and English needed to get them a job.  Jonathan Portes highlights this issue today in his blog.  Between 2007 and 2010 an average of almost 50% of pupils in cities left the education system without A* to C grades in GCSE Maths and English.  The research also showed an obvious correlation at city level between GCSE Maths and English attainment and youth unemployment.  This is a problem that needs to be dealt with first and foremost through our education system.  John van Reenen also highlights this problem in a recent blog:  “The UK does well at the top end of the skills distribution with big increases in graduates, but very badly at the bottom end with large proportions of innumeracy and illiteracy. Reforms to underachieving schools, strengthening apprenticeships, and maintaining support for low income families to stay at school are necessary.”

To give a practical illustration of this issue, in September last year, when Westfield Stratford started its recruitment drive, it had to provide literacy and numeracy training because vast numbers of the people applying for work did not have the basic skills required to fill in an application form.  It is to Westfield’s credit that it took on this role – but should the responsibility of educating workers fall to employers?

In his speech Miliband also stated that: “The problem we need to address is in those areas and sectors where local talent is locked out of opportunity”.  This is right but local talent is locked out first and foremost by poor skills.  The Government must focus on the education system – from early years to people entering the world of work – to ensure that British applicants have the skills needed to make them competitive in the labour market.