In June 2021, Birmingham City Council introduced a Clean Air Zone (CAZ) to tackle traffic-related pollution in the city centre. Birmingham was the first city after London to charge private drivers, a policy previously supported by the Centre for Cities.

The zone appears to have had a positive environmental impact. After its implementation, nitrogen dioxide (NO2) levels fell by 20 per cent when compared to the same period in both 2019 and 2020.  This should be seen as a step in the right direction as air pollution is estimated to cause 900 early deaths per year in Birmingham.

However, some critics flagged that the CAZ could hurt the city’s economy as it recovers from the pandemic. So, six months into the implementation of the CAZ, and given cities like Sheffield and Bradford are set to follow suit, what impacts did this policy have on footfall and spending in Birmingham’s city centre?

Before the intervention, footfall recovery in Birmingham was performing in line with that of Manchester. Figure 1 shows that in the second half of the year, footfall patterns between these two cities started diverging. Initially, the introduction of the CAZ did not change the footfall patterns between Birmingham and Manchester. A gap did open up between August and October, but this closed again in November. 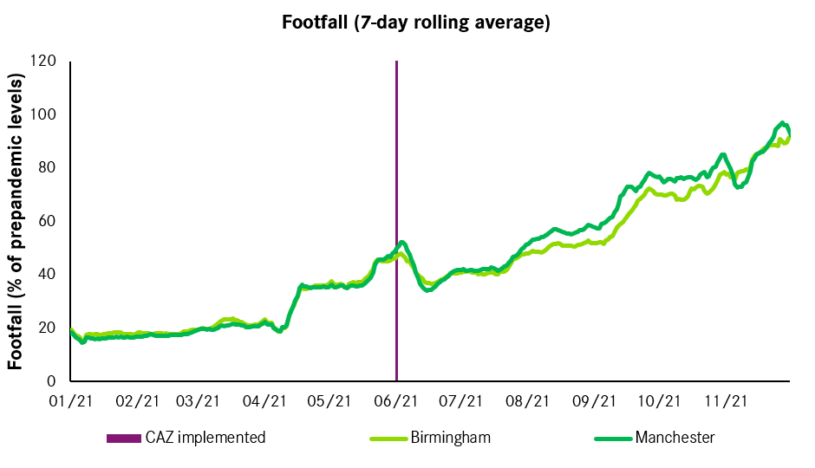 The fall in Birmingham’s footfall when compared with Manchester’s was mainly driven by weekend activity (see Figure 2), which is often associated with leisure and non-essential travel. Meanwhile, weekday and night-time footfall continued to perform in line with Manchester’s. While it’s very hard to prove a causal link between the CAZ and footfall, if it did have an impact it appears to have been short-term and on weekend flows.

Figure 2: A fall in weekend footfall explains the opening of the gap in overall footfall, but this was short term 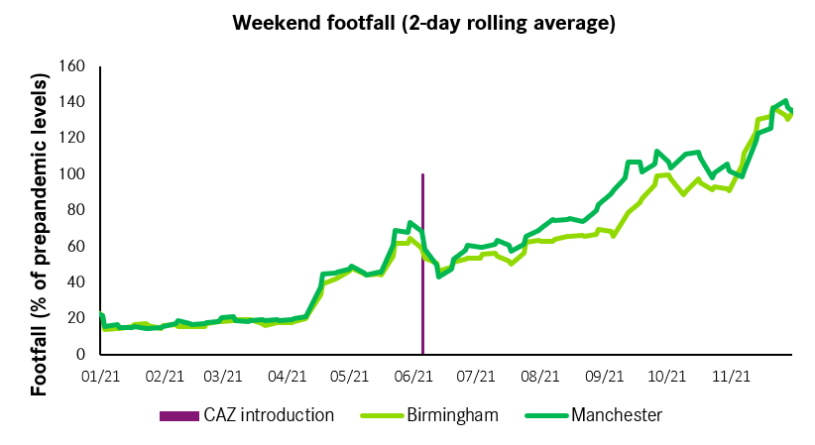 A closer look at spend data tells a similar story

The data on spending shows similar patterns. There was no immediate change in the gap between the two city centres straight after the implementation of the CAZ; the gap widened in August and September; then it closed from October onwards (see Figure 3).

Figure 3: Compared to Manchester, city centre spending in Birmingham had a temporary decline. 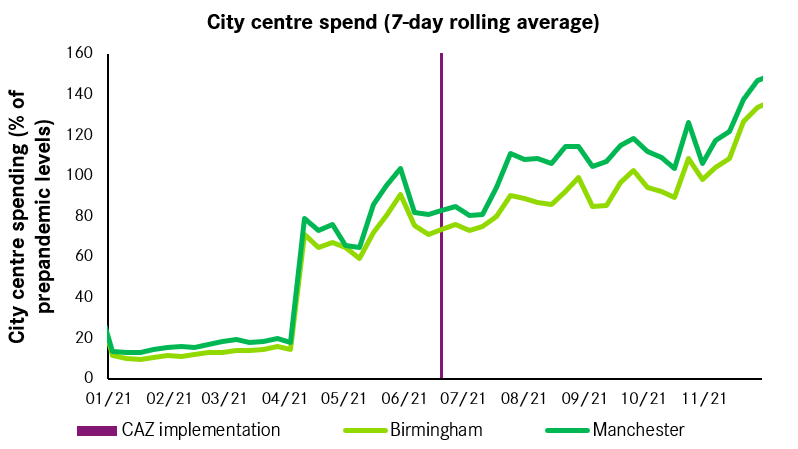 The first six months of CAZ in Birmingham appears to have been a success. Air quality improved, while both footfall and spend data suggest that the CAZ did not harm the city centre’s economy permanently. Charging private vehicles may be politically tough, but Birmingham’s CAZ experience questions the supposed economic impact that such measures have. While experiences in other cities may vary, this at least should provide food for thought for cities elsewhere.

Air quality
Is there an economic case for Clean Air Zones?

A number of cities across the UK are preparing for Clean Air Zones. Instead of being a trade-off, Valentine Quinio shows that there is an economic rationale for tackling toxic air.

Cities around the world are trying to reduce carbon emissions, this briefing showcases some of them.

Air quality
Cities Outlook 2020: Why we must clean up the air we breathe

Senior Analyst and co-author of Cities Outlook 2020 Kathrin Enenkel on how polluted air is killing thousands of people each year, and particularly affects people living in southern cities.